I’m back from a week in Rhodes.

My favourite day of the whole trip wasn’t the day my friend and I spent lounging by the pool reading, or the one chilling on the beach. It wasn’t the day trip to Turkey or eating our way around Rodos Old Town, it was the day we accidentally went on a 40-mile bike ride around the highlights of northern Rhodes.

We started out innocently enough, cycling the two miles to Ialysos to go windsurfing at 9:30am. We got the bikes for the day for 6 euros at the rental next to our hotel and off we went making sure to get there early enough to enjoy a coffee before the lesson. As we sipped at the traditional Greek espresso at The Windmill Cafe we sat admiring the waves, noting that it was very choppy out there, only to arrive at the lesson and find it was cancelled.

We decided to cycle to Faliraki, as you do. We had no map and just a vague knowledge it would be on the other side of the mountain, and that there must be a path running round it. We laughed about actually going over the mountain.

With no signposts we followed our nose and slowly clocked that we were in fact going over the huge mountain that had loomed in front of us. We were on 5-gear city bikes but since we’d started neither of us wanted to stop. The route from Ialysos up to the mountain was tough. A few guys obviously kitted out for the occasion whizzed by us going down, wooping all the way. The thought of whizzing down into Faliraki on the other side kept us going. 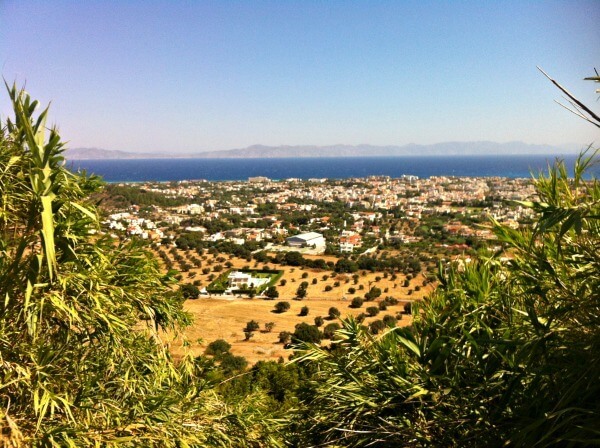 We passed a couple who’d admitted defeat in the 11am Greek sun and had decided to push their bikes up the demanding hill. We were definitely too proud and determined to do that. Instead, we used the absolutely incredible views from the mountain side to get off, take some photos and catch our breath, without either of us needing to admit how knackered we were. As soon as we saw them catch us up in the distance we sped off again.

Finally, 50 minutes later, we made it to the top, only to realise this wasn’t a scenic throughway at all. It was the path to a church, on the Filerimos Mountain, with only one way back down. The exact route we’d just done up. We left the bikes to rest our legs, and our foo foos, to scope out the cliff edge with our jelly-like legs. We could see Faliraki from where we were, almost taste the 90s fishbowls in fact, but we just couldn’t get down to it.

After consulting one of the maps at the church shop we decided we needed to go down and round if we were going to carry on. The next five minutes were a few of the most liberating I’ve ever had. Our hard work had paid off – the mountain was so steep I didn’t need to peddle once on the descent.

After an iced coffee at the bottom we decided to try again to get Faliraki. From backstreet avenues to stretches of motorway and bee museums we peddled and peddled and peddled. In fact, the bee museum was a particularly low point. It was a halfway point and we just didn’t have the energy to go on. After a short debate about turning back we powered on. After about a minute we were rewarded with a downhill run for about 3km, again, with our 5-gear bikes there was nothing we could do but sit back and enjoy the Greek countryside unfold. Perfect. 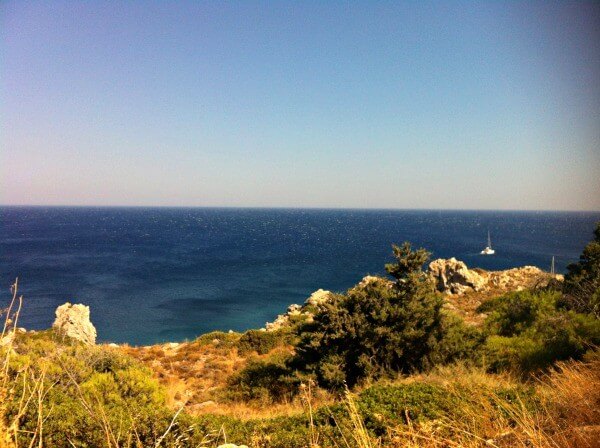 It was during this run that I pondered why people say ‘it’s all downhill from here’ in a negative way. I decided that downhill is a lot more pleasurable that uphill and next time anyone says that I shall tell them my story to put them right.

We arrived into Faliraki: the Promised Land.

Strange, interesting, desperate place that it was, all we wanted to do was find somewhere to sit down and get some food and drink. We’d been cycling for about four hours in the midday Rhodes heat.

We sprawled on the benches at Chaplins Bar looking out the window to the beach and no one batted an eyelid as we put our feet up, ordered a beer and didn’t speak for about 10 minutes. Anyone would’ve thought we’d had one of those Faliraki nights out, not just cycled from the other side of the island. Then desperation set in.

The more we sat the more we decided we’d never make it back alive. The thought of cycling up that downhill that had just given me so much joy made me feel sick. We asked at the Tourist Information what they thought we should do: the only answer was pity. We waited for a bus: he wouldn’t take us. We asked a taxi: he wanted to charge double and our budget was already dwindling fast, we were just going to have to woman up and go for it.

We decided to go round, instead of over. We were happy to do the distance, just not the hills in our flip flops with the sun beating down on us.  It was the best thing that could’ve happened. 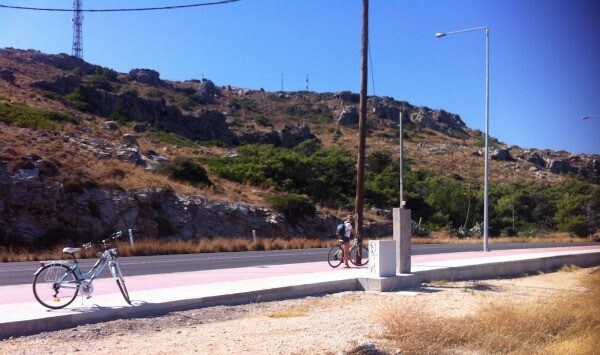 Where we’d enjoyed the green forest of Rhodes before, this way we could enjoy the coastline. And there was even a huge cycle lane to guide the way. We passed the water park, the luna park, Kalithea Springs, a Prada outlet, a Versace outlet and a brewery. Finally, we landed in Rodos Old Town, and all we could do was high five it out.

Only, we hadn’t actually ‘made it’. Of course we congratulated ourselves with some Greek ‘Champagne’ and talked about how we’d finally done it. Then the time came to complete the final 6-mile cycle from Rodos to Kremasti where we were staying. We’d done it a few days previously – it was easy, the home stretch. Except we went the wrong way. My heart sank as we came out of the labyrinthine streets at exactly where we’d been an hour before. Thanks to our hindered judgment we’d just added an extra good few miles onto our journey.

The bikes were meant to be back for 8pm and it was pushing 7pm as it was. So of course, in our panic we took another wrong fork. And then my friend lost her flipflop cycling, much to the amusement of three Greek men who were sat surveying from the comfort of their coffee shop. We were kind of over it and just wanted to get back. Thankfully another downhill bought our spirits back up again and as soon as found the familiar road back to Kremasti, we relaxed. The bikes were returned to their rightful owner at around 8:30pm – he wasn’t bothered – after an approximate trip out of 40miles. We sat around the pool to enjoy a well earned gin and tonic and to break down exactly where it went so wrong, or, in hindsight and with the memories and photos, so right.

Thanks for the info,I also found a good chance for everyone who wants to travel around Greece more than 1, 3, 5 monthes... good way to travel and work, here I find some opportunities and work posts https://www.workingtraveller.com

Cycling around an island is one of the best ways to discover it! Although you must be careful if you are not experienced with in cycling!

Brilliant! I find unintentional exercise the best way to get things done. Love the blue bike

I just got back from Mykonos and am in LOVE with everything Greek! Exploring somewhere is always so much better than just lying on a beach...we went scuba diving which was AWESOME! Just have to get round to typing it all up now...

Ooo that sounds cool. We did plan to do that but our budget got the better of us!

ohh it must be so hard cycling in that heat! You made some lovely pictures along the way though :)

Thanks Rianne, definitely a tough day but a million times more fun than exercising in a gym :)