I’ve just spent the weekend at my friend’s awesome hen party in Stratford-Upon-Avon. As bridesmaid with the main task of organising the girlie weekend it had to be really, really good. And it was.

It also needed to be close to Birmingham for her local pals with sprogs, as cheap as possible, be suitable for 28 very different hens, and somehow fit in with the theme of her New York proposal.

This is how I did it…

Stratford Upon Avon is a great place for a hen party.

Bit more chilled than the big cities, bit of cultures, and generally decent prices in the Midlands too! Yes, it’s tacky, but it’s fun and our ‘I heart JC’ tees went down brilliantly with the bride (Jenny Caswell, not Jesus Christ), and with the Avon locals. You can get all the hens to buy their customised tshirts from Amazon easily.

I was a bit nervous about the name tag game we thought up for the hen party in Stratford-Upon-Avon. You just don’t know how crude you’re allowed to be when you meet your mate’s other mates. Is it funny or is it filth?

We decided to let everyone choose their own ‘rude’ names and most people took it well. It did what it was meant to do and got people chatting and laughing. My favourite name tags story…

Bridesmaid Kayte: ‘Would you like it filthy or tame?’

Bridesmaid Kayte: ‘Suck me off Sarah?’

Bridesmaid Kayte: ‘Sexy Sarah it is then’

I booked the 2-hour afternoon tea boat ride with Bancroft Cruises for the hen party in Stratford Upon Avon. At £17.50 for the trip including a Champagne reception, decorations and a scone and unlimited tea/coffee it was brilliant.

We’d chosen the hottest day of the year and cruising down the Avon with the breeze flowing through the boat was unforgettable.

Fiona, the managing director of Bancroft Cruises, was really friendly and made sure we had everything we wanted. She decorated the boat and let us blast my iPod with the carefully selected playlist for the whole trip. We got lots of willy straws

, gave her a ridiculous tiara and veil

and drank a huge amount of Champagne and shots.

We all bought Jenny a £5 present, which went down amazingly – when was the last time you received 28 presents? It was a cheap and brilliant way to keep her happy and feeling special on her hen party. I ended the boat trip by giving Jen a photo book which we’d all written in as a memory of the day. She cried. A lot.

The best part of the day for me was when she saw the boat and  her favourites Take That were blasting out. She was so happy.

After the boat we all went and sat in the park for a few hours. Two bridesmaids went off to buy food from M&S, two went to take everything back to the hotel and two went to find a good spot in the park (she had 7, yikes).

This was a brilliant opportunity for everyone to get to know eachother and sit back and relax.

It was also the perfect time for a game of Mr and Mrs led by Jen’s sister.

Having the hen party in Stratford-Upon-Avon just made it that bit more chilled, especially as we’d managed to pick such a hot weekend for it. 6. Stay flexible for the budget The most difficult thing about organising a hen do is definitely the money – finding something that would suit everyone’s budget, then collecting the cash, then keeping track of who’d paid was a nightmare.

At first I was trying to book a cottage, but keeping track of 28 people’s (at one time it was 38) payments would’ve been a nightmare.

I ended up choosing the Mercure right in the centre of town and just telling everyone to book in, or as near as possible. This meant they could find a bed to suit their budget.

7. Have dinner at the Church Street Townhouse

We booked a private room at the Church Street Townhouse, which was amazing and just up the road from the Mercure. It was so hot that most of the group ended up sitting outside, but it was great to have our own area for just us.

We all paid £10 and had sausages, chickpea tapas, fish and chips and meatballs. We’d prepaid for a load of Champagne and that was flowing too – more getting to know each other here and we were ready to party. 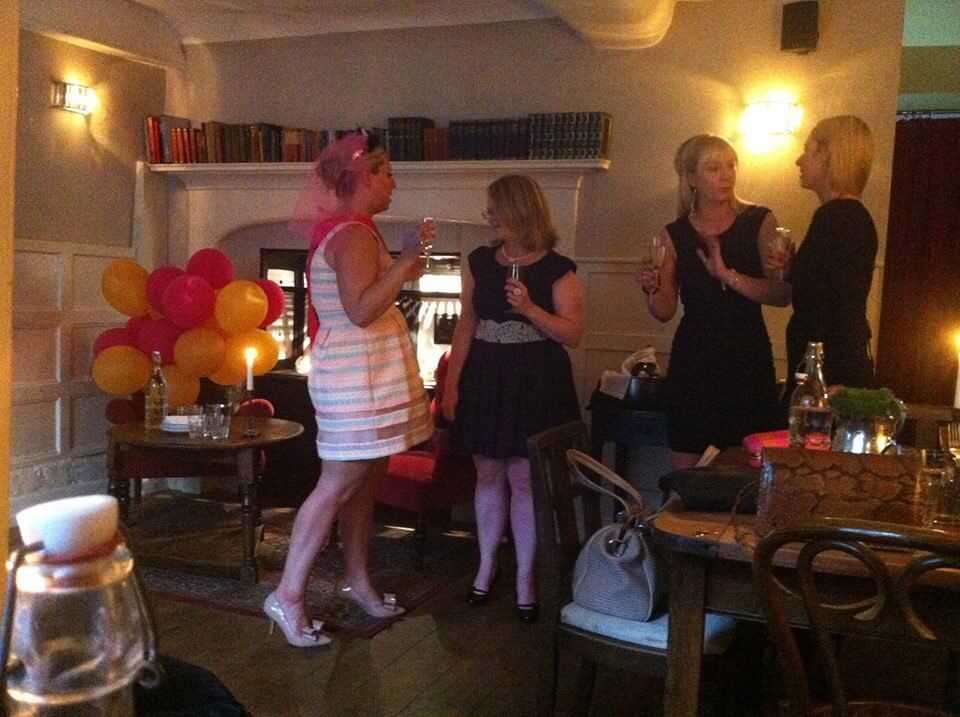 8. Book a VIP spot at No 1 Shakespeare Street

Another one of Jen’s bridesmaids knew the owner of No 1 Shakespeare Street and we ended up getting the whole VIP area in there. We partied for hours and from all the censored photos that I won’t share here you can see Jen had an amazing time.

Another reason to love a hen party in Stratford-Upon-Avon – no superclubs and craziness of the big cities.

9. Replay the night over breakfast at Wetherspoons

Had to be done.

Four of the group had gone home with heat stroke, two spent most of the breakfast in the toilet vomming and Jenny was busy drinking the tequila I’d ordered for her. But for the rest of us, we made the most of the cheapo menu at the Golden Bee and laughed a lot at the photos from the night before, blaming the rum for when it all went wrong. 10. Hangover lunch at The Lazy Cow

After lying by the River Avon all morning we needed to get out the sun and found a delicious burger at The Lazy Cow looking over the beautiful view. And with the final bite that was that, the awesome hen party in Stratford Upon Avon was over.

It was time for us stragglers to get the train home and just start looking forward to the wedding in September!

I’d definitely recommend checking Stratford Upon Avon out rather than organising a hen party in Bristol, Manchester, London or the other big cities. It was quaint, friendly and a brilliant weekend.

More on adventures in England

58 Brilliant Things to Do on the Isle of Wight

How to Plan a Hen Party in Stratford Upon Avon

A Peaky Blinders Weekend in Birmingham

I love featuring in your blogs! 'Suck me off Sarah' did not know what she was letting herself in for when she said 'filth'. Ha ha ha. Xx

Ok, I may sound like a dolt, but is a hen party a bachelorette party? If that's the case, wish I thought of matching shirts for mine. =)

Yes! Same thing. I should've made that clear!