Going on holiday but not actually knowing where you’re going is really weird. I did it a few weeks ago. One minute I’d be really excited at the possibilities, and the next totally frustrated because I wanted to know.

What to pack? What will we do? What if it’s somewhere we’ve been before? Srprs.me have just launched in the UK – offering us travel lovers the chance to purchase a certain theme of trip – city or backpacking – but to have absolutely no idea where we’re going. They invited me to try out a city break, with a friend for the ride.

Need somewhere to put this so I can embed it in my @srprsme trip to Lisbon blog post, so just gonna leave it here 🙂 sorry for #envelope pic.twitter.com/nGflmWSnJV

– sorry for the amount of times I say ‘envelope’

I invited Helen, the awesome blogger behind heleninwonderlust.co.uk, to come with me. We spent the month run up guessing where it’d be, and where we didn’t want it to be. We didn’t want Barcelona as we’d been together before – same with San Sebastian and Bilbao. We wanted to try somewhere new, and somewhere we were both excited by. We’d been told it was a ‘cool’ city so we guessed Budapest, Prague or maybe, Lisbon. Although Helen was still holding out for a beach holiday in Tenerife.

When you buy the srprs.me adventure you can say if there are any destinations you don’t want it to be – so I filled in my entire list from my where I’ve been page, which, admittedly, brought the selection down a bit. A few weeks before we were given our own page on their site where we could check for the weather, for a clue as to where we’d be spending the weekend. All we knew is that it would be 17-20C and we needed to be at Luton Airport for 10:30am on the Monday. 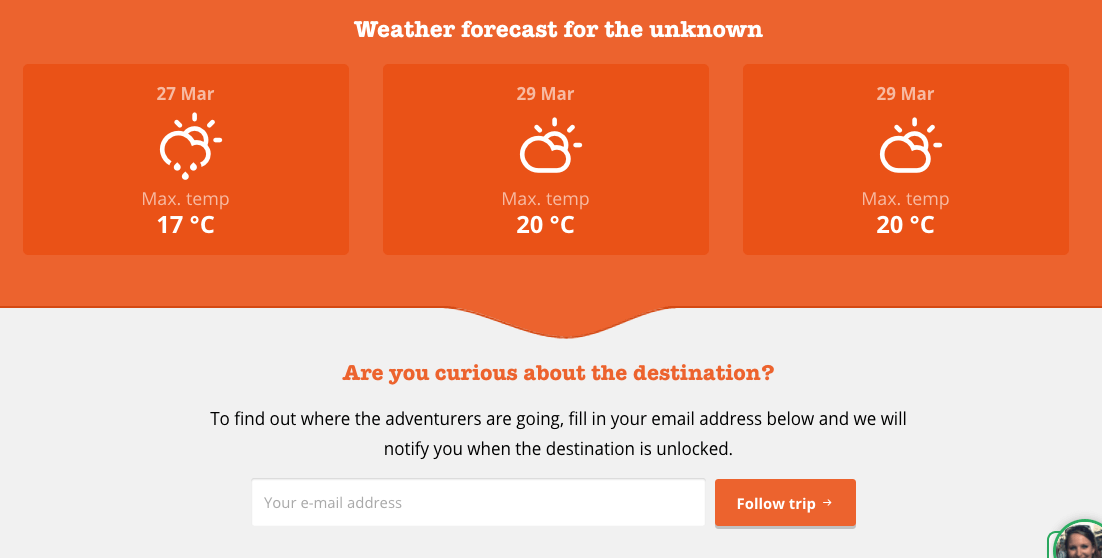 Packing was kind of annoying – beach city? Party city? Fancy city? I decided to be ready for anything and crammed my carry-on sports bag to the brim.

And so, because of where we live and where Luton Airport is we stayed over at the Luton Airport Ibis the night before to get the holiday started. The morning of our trip we scratched off the card we’d received in the post to find out our unique number. You’re meant to input the number into the website and it’ll tell you where you’re going, although we, for some reason, just couldn’t work it. Good job we had an envelope with us that could only be opened that morning.

We opened it up to find our boarding passes and that we were going to… LISBON!

We soon realised that we didn’t actually know much about Lisbon, or what there was to do there, or… anything, only that we both happy to go. We’d work it out when we got there.

There was no need to check in as we had our boarding passes and hand luggage ready. Instead we went up to Frankie and Benny’s a la Luton Airport for breakfast and a Prosecco or two to get in the holiday mood, and to get excited about going to Lisbon with srprs.me.

We realised later on the plane that we should’ve spent this time researching what there was to do in Lisbon and downloading a guide or two. Not us though – smashed avocado toast, a coffee and a Prosecco later and it was time to board. 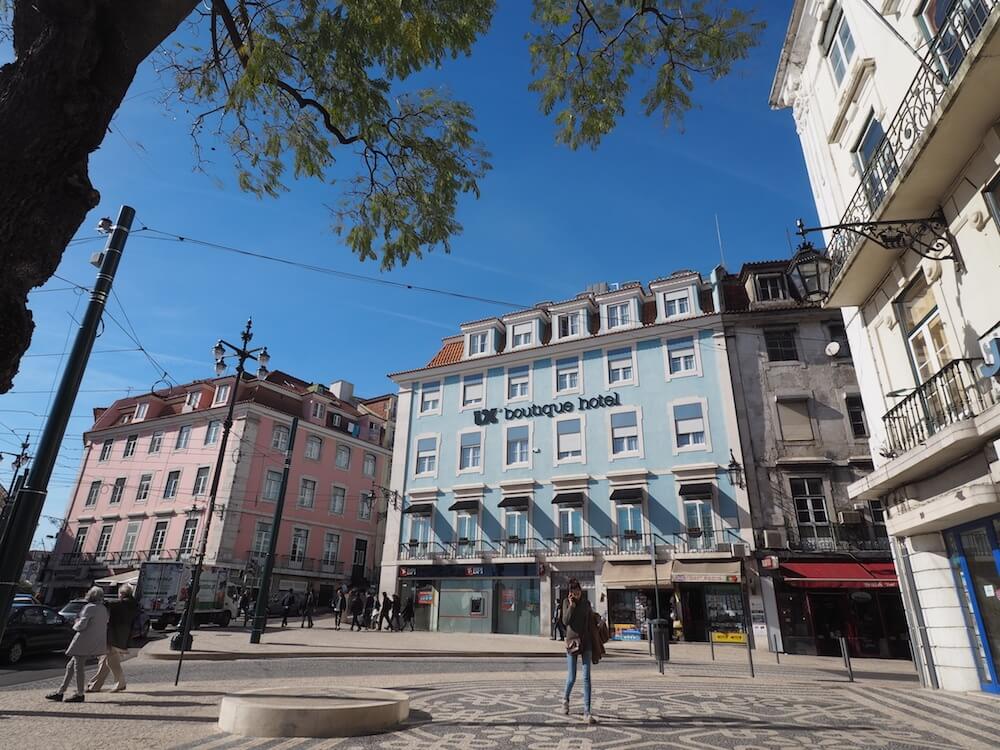 Our flight was with easyJet and our accommodation was included in the experience. After we had finally realised we needed to input the unique number into the website, at the airport, it set off a trigger that emailed me our hotel details – LX Boutique Hotel was swannnky. I was excited.

On the flight Helen introduced me to the delights of wine on short haul travel – normally I don’t touch the stuff unless it’s already included in my ticket. But we were on holiday! Yay! Wine all round! £6? Bargain!

The srprs.me experience doesn’t include transfers, but with the help of Uber we were at our hotel within about 30 minutes of landing. Lisbon is quite a small capital city really. Our hotel was lush, although the clear glass door situation was a little weird. I think it was ‘modern’, but when you’re sharing with someone you have little interest in seeing naked, or hearing in the bathroom, it was kinda weird. We also had breakfast included every day, and a sushi welcome that night. And so with some Ginjinha (local drink) and a few pastela del natas (local pastry) from reception we were off to explore Lisbon. Except… we had no idea what to do. The doorman of the hotel told us to check out the Time Out Food Market round the corner, where we found wine, pies, chicken and pizza.

Not particularly Portuguese we soon realised, but at that point we didn’t know what ‘Portuguese’ was. 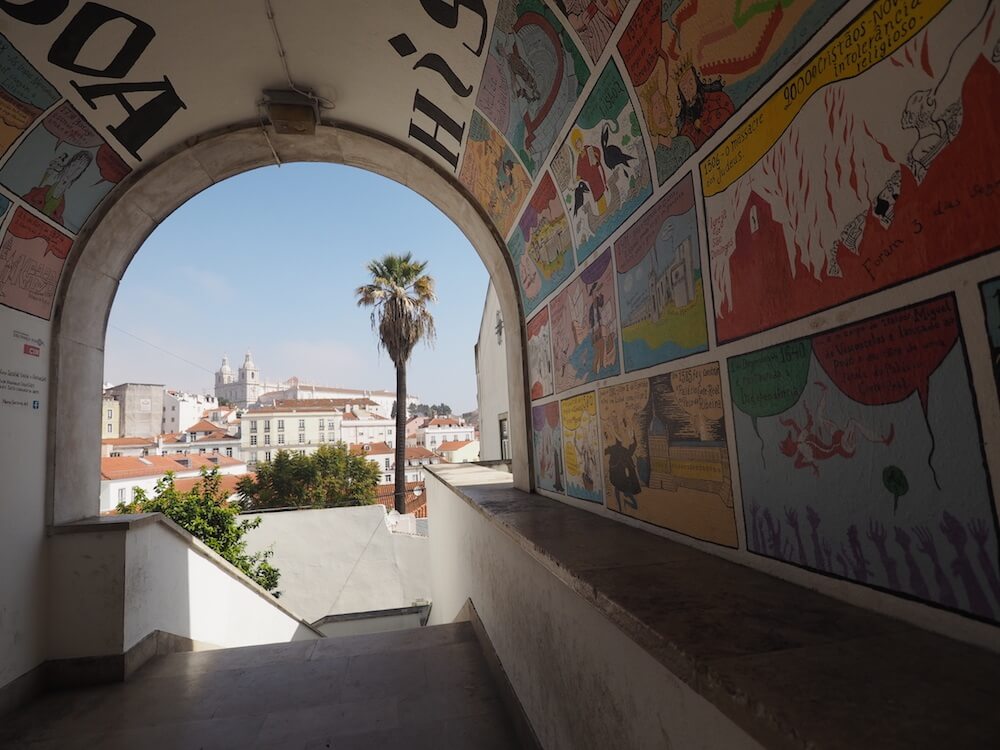 Travelling on a srprs.me trip was definitely a different way to see a city for me. I usually have some idea of the key sights I want to see and what I want to do, sometimes even totally planned out all the freebies, but I’d had no time to do any research. 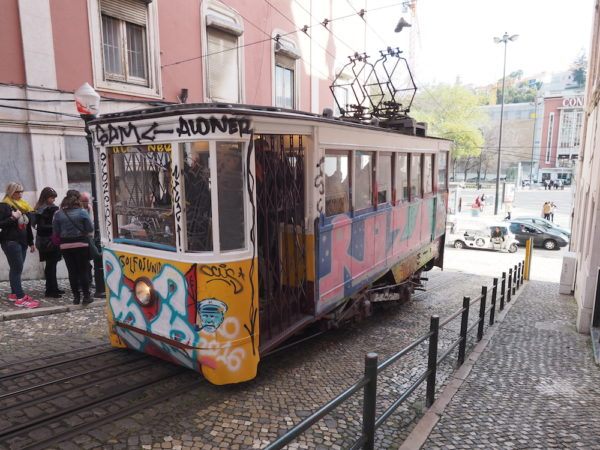 I had a bad case of FOMO, thinking that we should be doing this, or seeing that, but in our ignorance we’d just pop into a bar for a wine instead. Much easier than trawling the internet on our phones. I think this was a mixture of the way srprs.me works, and the fact we were in Lisbon. A quick top 10 things to do in Lisbon search now brings up monasteries, castles and convents – not really my idea of a holiday anyway. It’s not a city with must-sees, more must-feels – soaking up the atmosphere from a piazza for example. Instead, we walked around a lot. And drank a lot. And wondered what we should be doing a lot. We enjoyed the panoramas and vistas from the miradouros – the viewpoints dotting the hilly city. We met up with some old colleagues of mine who’d moved there and they showed us some cool bars and restaurants in the Old Town. After that we found an acoustic bar, and then a salsa bar and then a bar, and then more bars on Pink Street (the street to be on at night) and ended up getting home at around 5am, having left my phone in a taxi never to be seen again. The next day we tried to go to Sintra. Somewhere everyone on our social medias told us to try out. From one calamity to another, and Helen declaring it the most travel mistakes she’d ever made in a day ever, it was a disaster.

At one point we were sat at a bus stop in outer Sintra, waiting an hour for the next bus, because we’d just seen a lot of people get on a bus and followed them, not knowing where they were going. Then we paid a tuk tuk to take us up to Pele Castle, the Sintra highlight, just as the shutter went down on the ticket shop. So we immediately came back down again.

That’s just two of about 20 that are too ridiculous to recall – standing on the wrong side of the road for hourly buses, y’know, that kind of thing. 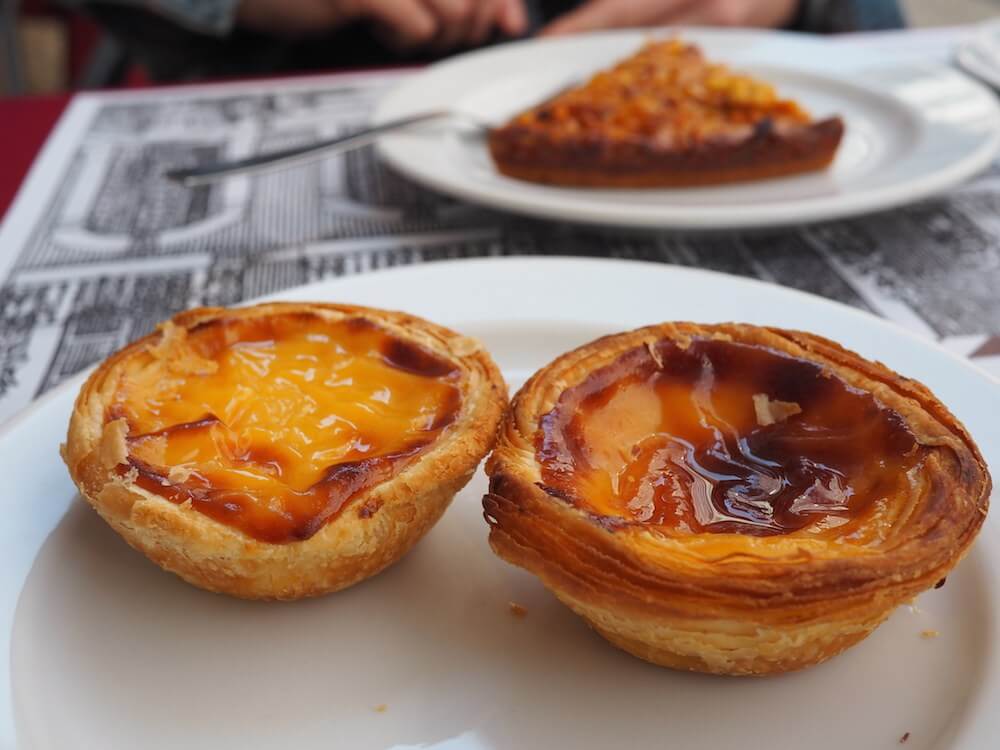 We had no idea what we were doing and not having a phone meant I couldn’t look anything up. Yes, we should’ve bought a guide in the airport instead of knocking back Proseccos, but we didn’t, and we didn’t want to spend the trip looking down at our phones anyway.

We did eat a lot of pastel de natas though.

For a more successful trip to Sintra, from Lisbon, check out this guide by Casual Travelist.

Why choose a srprs.me trip? 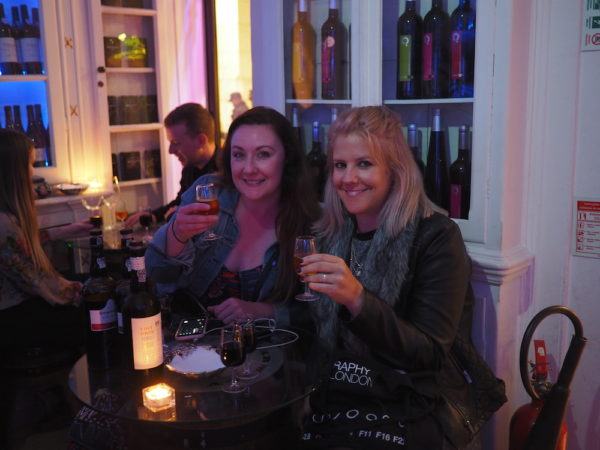 A srprs.me trip is a great idea for groups wanting to join together to buy someone a present for a special occasion, or a big birthday. They’d also be good if you wanted a group trip or family trip but couldn’t decide where to go. Or, if you were just too busy to think about holidays before, but knew you wanted to get away.

And they’re perfect if you just want the thrill of not knowing where you were going.

We had a great time in Lisbon, and it was fun in the run up trying to guess where we’d go, but if you’re doing a srprs.me trip I’d definitely suggest using that time in the airport and on the plane wisely, and buying a guide to where you’re about to go. Unless, of course, your idea of a good holiday is just going with the flow – something I apparently need to get used to when it comes to travel.

Would you go on holiday without
knowing where you were going?

Check out srprs.me for more details!

I bloody LOVE this idea girl; it's such a spontaneous way to travel! Lisbon is such a great location too - so glad you girls had the best time!

Yeah it was fun! Put us slightly on edge not knowing where we were going but all good fun in the end. Definitely a different way to do it :)

That's cool idea. I would like the 'not knowing part' but I'm not sure about my Mrs, she likes to be in control too much! Lisbon looks lovely by the way, I've never been before. I think I would have done lots of walking and drinking too, maybe not so much of the walking though, ha!

Definitely recommend Lisbon! Cool city with enough to see and do outside that you don't have to pay high prices to see the sights. Perfect for a weekend break from England as it's a good price compared to a lot of Europe too. Hope you make it there some day to try all the wine :)

I love the idea of not knowing where you are going until the last minute. I tend to over-plan and then try to cram too much into what is supposed to be a holiday but ends up being a mission to do ALL THE THINGS. srprs.me sounds like the perfect break for control freaks like me. Glad you enjoyed drinking your way around Lisbon!

I LOVE this idea, although I think I would drive myself mad thinking of all the destination possibilities haha! It's a good idea for those European cities that don't necessarily have millions of sights to tick off. You can just absorb all the atmosphere! And wine. ;)

Yeah definitely. Not so stressy to try and fit everything in. A chance to chill to and just enjoy what's happening rather than tearing around the town. I'm all about second and third cities right now :)