I’ve just got back from one of the most incredible travel experiences ever – a Pacific Coast Highway Road Trip.

I flew into San Francisco and worked my way down to LA over five days. The scenery, the food, the hotels, the cars and the beer and wine tasting: all of it made up for one of the best and most surreal weeks of my life.

Here’s my route. The stop overs are in purple and the short term stop offs in yellow…

After landing in San Francisco we went straight to the Hotel Zephyr in Fisherman’s Wharf to freshen up. It had only opened a week before and is in a great location right on the waterfront – it was easy to walk to the famous Pier 39 sea lions and the Golden Gate Bridge viewing point from the front desk. For dinner we went to the Boudin Bakery over the road for chowder in bread bowls, fish and chips and their signature sourdough bread and butter pudding for dessert. I pretty much carb coma’d into bed that night. The next day we picked up our transport and drove to the Big Sur. Between the 8 of us we had…

I went as a passenger in the jeep to Pebble Beach, where we were shown round one of the most famous golf courses in the world. Winston Churchill used to play there, and Bill Murray and Tiger Woods still do. Sadly didn’t see them, I was too busy stuffing my face in The Bench restaurant. I had salmon California salad, followed by smores (Graham crackers, chocolate and marshmallow, but this time, grown up style). Just the start of a glorious week of incredible food. And then I stayed at the Ventana Inn & Spa in Big Sur and had a hot tub, and a hammock on my balcony and life was all kinds of incredible. After a delicious dinner looking out over the Big Sur countryside we had a hot tub party and made the most of the mini bar. 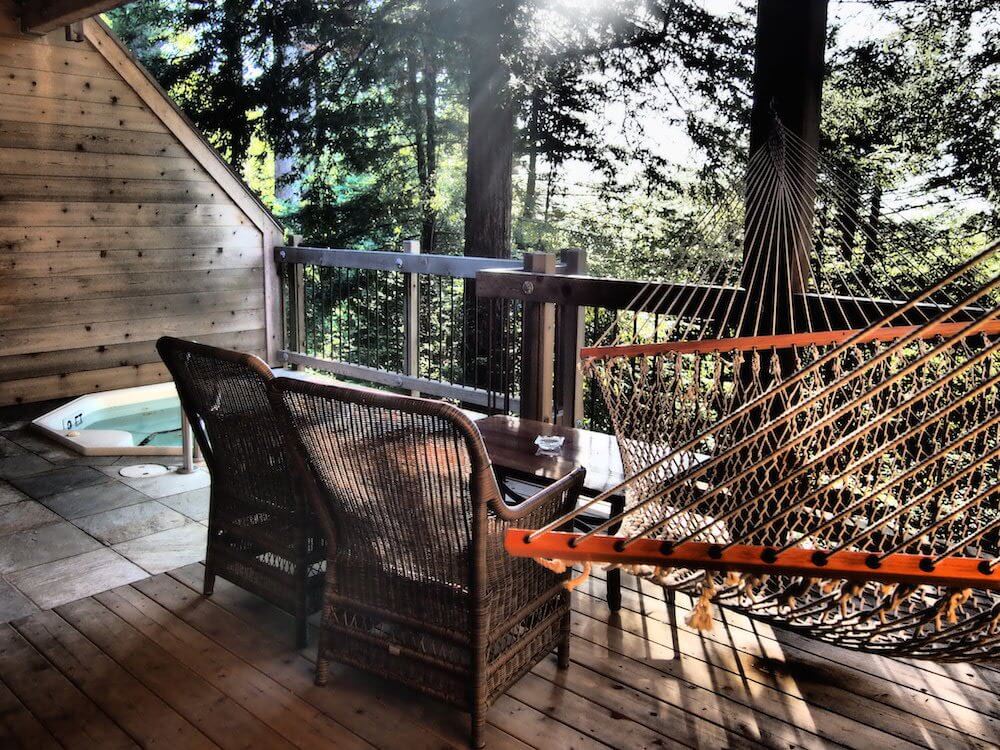 After a morning spent by the pool and hiking Ventana’s private trails I set off in my postbox red Ford Mustang for San Luis Obispo. I had my music linked up and drove the Pacific Coast Highway like a boss (a slow and safe one).

The route was so beautiful I had to keep stopping. I went to McWay Falls, Elephant Seal Beach and had a huge salmon taco lunch in Lucia, as well as stopping to admire the bridges along the way. I finally arrived at Cottage Inn by the Sea, right on Pismo Beach in a sea view room in San Luis Obispo County. It was straight out again ready for the wine tasting with the the Adelaida Winery. Reds, whites and an 11% cider later and we went off to the famous Madonna Inn for chicken, rice and their famous creamy cakes.

Sand dune buggying today – ever tried it? It’s a lot harder than I thought, and at times pretty damn scary too. It’s perfectly safe as you’re in a roll car and the guys from Sun Buggy in Oceano said there’d never been an accident, but as I was stuck in the sand trying to traverse the huge dunes I was sure I’d be the first. 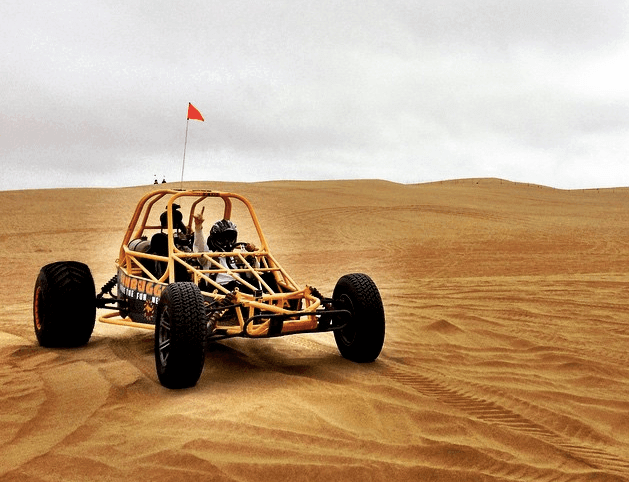 It was pretty hungry work so our friends at Visit San Luis Obispo County and Pismo Beach CVB bought us some donuts – including one with bacon frosting.

After that it was time to mount the Harley Davidson to travel from San Luis to Santa Barbara via Avila Beach for whale watching and Santa Ynez for a pint. Being on the back of the bike was amazing – feeling the wind, getting good photos of the mountain scenery and feeling that beast between my legs was something I’ll never forget.

We also popped into In n Out Burger as we came into Santa Barbara too, just to try it. That night we went beer tasting on a sailing boat, pedi cabbing along the beachfront, wine tasting at Santa Barbara Wine Collective and then for a huge and delicious meal at The Lark. A hipster / warehousey restaurant you have to have a reservation for but it was the best meal I had in California.

Then we went and had a few drinks downtown. There was a lot of wineries and bars to choose from – really loved Santa Barbara! It was a long old drive today, not helped by me suddenly panicking about driving on the freeway near the airport. I managed to sort the sat nav to avoid the big, scary roads and like most things it wasn’t nearly as bad as I imagined. Driving from Oxnard to Santa Monica was a beautiful stretch of road. There were a few points I looked in my rearview mirror and just wanted to go back to take all the mountains, beaches and ocean views in, but I couldn’t. The views coming into Malibu were among the highlights of the trip (do you like my Virgin Holidays driving gloves?). Traffic was bad because Obama was in town and the roads had been shut down so he could travel through. The supposed 2-hour journey ended up taking six hours. Equal thanks to getting stuck in Oxnard, needing the toilet, stopping at Zuma Beach and 10 miles in LA taking an hour.

I’ll admit it was a relief to drop off the car – I haven’t driven in 2 years and I was mentally exhausted from working out the roads. Good job I was staying at the Fairmont on Santa Monica Beach to rest and recuperate. We had dinner booked at The Fig restaurant downstairs on the ‘Feed Me’ menu. The taster menu is a popular choice for anyone who can’t decide what they want to eat – I really think this should catch on in all food outlets. Above you can see one of the seven courses – fig, rocket, truffle oil and Parmesan on toast. That night we partied at the famous Bungalow Lounge on the beach before I finally collapsed into bed.

After a morning on the Santa Monica Pier, working out on Muscle Beach and watching the skaters and cyclers go by, we jumped in the bus Universal Studios bound. Our bus driver described himself as ‘a frustrated tour guide’. He kept telling us half stories as we went round “something happened there”, “someone famous lives there” etc. He did point out Marilyn Monroe’s house though, and where Whitney Houston topped herself, so that was cheery. They’ve got a whole Springfield area set up where you can drink at Moe’s Tavern, eat a Krusty Burger and go on the new Simpsons simulator ride. I also thoroughly enjoyed being turned into a minion on the Despicable Me simulator and screaming when the bugs came to get me on the Mummy Returns ride.

As part of the Universal Studios experience we had queue jump passes and a guy, Jeff, come round with us to show us the best way to get around the park, it was definitely a time efficient way of doing it.

We also got to go on a Movie Set tour and saw them filming Home and Family (yeah, never heard of it either) and Access Hollywood, we saw the set for Jaws and the stages they used for Jurassic Park 3 and Pitch Perfect 2 too. 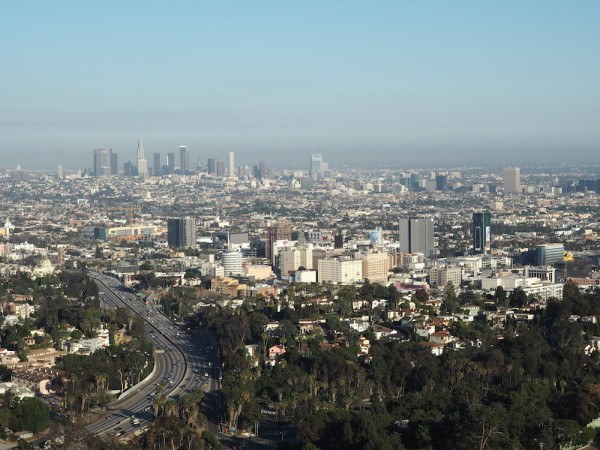 We went straight from Universal Studios to the airport, via a view of the Hollywood sign on Mullholland Drive (look hard at the photo on the left!) and an awesome vista over the LA skyline. Once we were at the airport we had the chance to chill in the Virgin Holidays Clubhouse with a sashimi tuna burger and some maple syrup and wasabi donuts.

Then, when I went to get on the flight my ticket beeped and I’d been upgraded to Upper Class, which was the absolutely perfect end to a brilliant week in California.

Check out the Visit California website for more information.

How you can do the same…

Price is per person based on 2 adults travelling and sharing a standard room and includes all applicable taxes and fuel surcharges which are subject to change.

Virgin Holidays is a member of ABTA and is ATOL protected. To book: www.virginholidays.co.uk, 0844 557 3859 or visit one of the 126 stores located in Debenhams and House of Fraser stores nationwide.

[…] all the way down to Los Angeles. However, the highlight of the drive is undoubtedly route 1 – the Pacific Coast Highway, which is reputed to be the most scenic drive in the […]

It’s really a cool and helpful piece of information. Thanks for share.

No worries – hope it helps!

This is awesome! I love California, and I can’t wait to check out some of these cool spots when I go back in April! Thanks so much for all the info!

Me too! Definitely one of the coolest state in the US. I hope you have a great time there. Let me know if you have any questions.

[…] y’know I was there at the start of June. I went to California this time last year and cold and unprepared there […]

All your stops look amazing!! Im going march 1 with my boyfriend for 2 weeks! We have friends along the way so we can stop for a few days at a time. I really want a camaro convertible and im finding it hard to rent one where I pick it up and drop it off at different locations. Where did you rent the cars from?

We got them from Hertz, seemed pretty easy actually! Sometimes they don't know what they've got until the day. How come you can't find one? What's it saying?

Hi, I’m Vicky…
I’m a 30-something adventurer from England. In 2014 I left my job to travel the world as a digital nomad. Since then, I’ve travelled to over 70 countries and been to over 60 different festivals. England is home again now (the south coast) but I still love a good holiday!