St Kitts is tropical, dreamy and all kinds of exotic with rainforests, beaches, and everything you’d picture in paradise. Of course they run on island time, and everything is a lot more chilled than you’d find over here in England, but they do know how to come together to organise a good festival. The Kittitians love a good festival. Makes sense, that Caribbean vibe, love of calypso music and endless supplies of rum, combined with that innate rhythm you find in the Caribbean that makes me not want to dance for fear of my obvious British stiffness. Dancing and having a good time come naturally here.

The best festivals in St Kitts

Seeing out the year in style, the St Kitts-Nevis Carnival spans Christmas and New Year. It’s the country’s biggest event and has people partying for two weeks straight. Think street parties, processions and performances with the occasional dance-off in the streets. You’d think after 14 days, Kittitians would be ready to snooze, but no. The Sugar Mas Grand Parade on New Year’s Day is the carnival climax and marks the end of the celebrations. Winners of the weeks’ contests travel through Basseterre’s streets before heading to the final fiesta on the beach.

Get fit and save the turtles. This annual swim takes place on the 26th of March and will be the 15th year swimmers will have held the memorial event. It’s all about celebrating the life of a club member but also raises awareness for turtle conservation. If you’ve got a cozzie you’re more than welcome to join in the short swim between the two islands. Good luck.

It’s not long before Kittitians are back on it at the black beaches of Sandy Point. This town’s population of 3,000 booms come March when Black San Bang-a-Lang arrives.

This is an annual event over the Easter period that lasts a few weeks. It’s one for all the family and has everything from pageants to parades right through to fetes, talks and casual calypso gatherings. 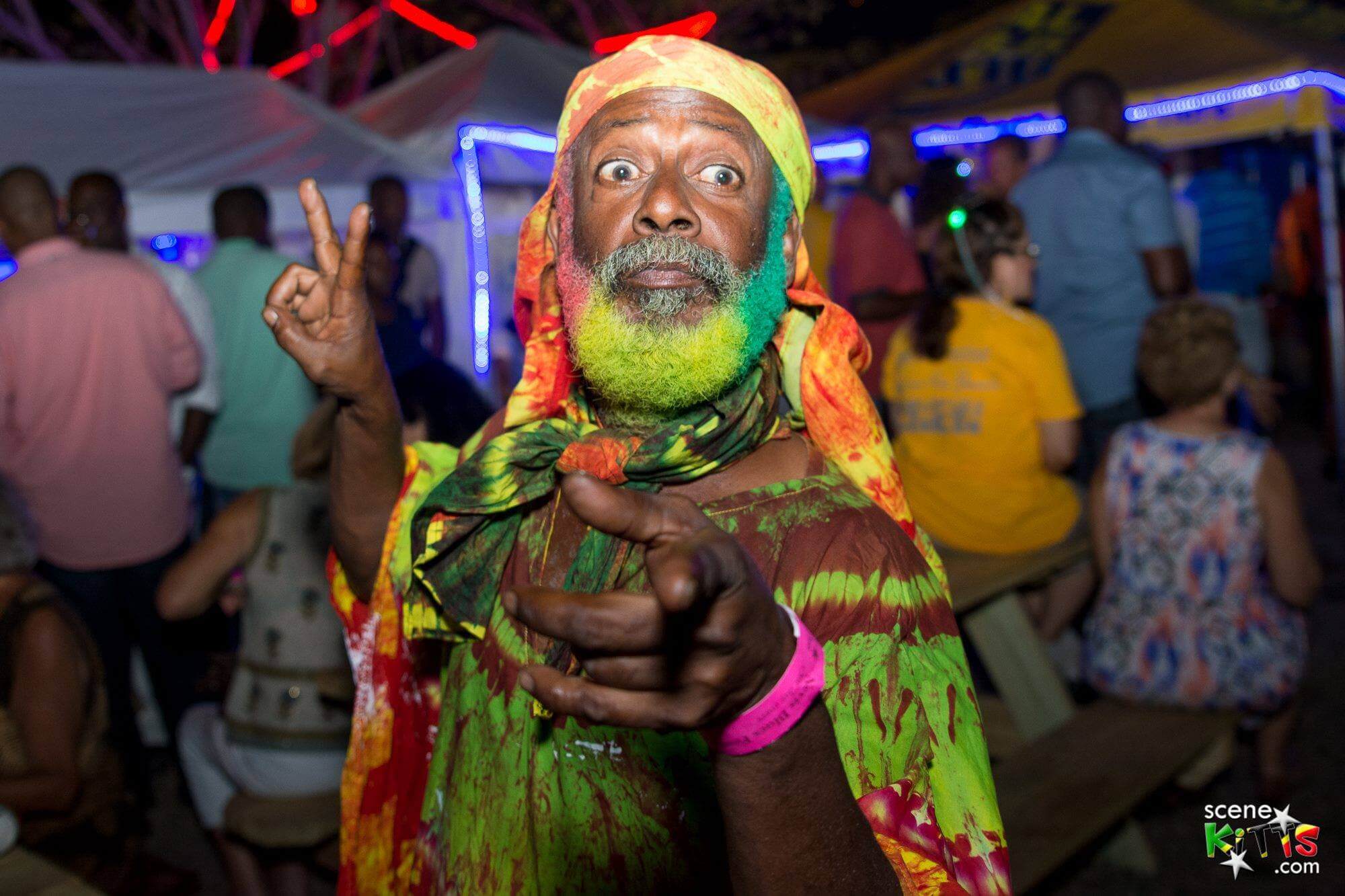 On the 7th and 8th of April, international acts play the best of blues on the Oualie Bay Beach. There are limited numbers so get your tickets in advance.

– Thanks to the Nevis Blues Festival Facebook page for the photo

The fancier title is ‘Labour Day Emancipation’ – a day to mark the end of slavery. As with all the festivals in St Kitts, expect talent shows, calypso beach parties and a fair few pina coladas.

Green Valley Festival is another two-weeker kicking off around April 27th and wrapping up mid-May. The event is all about ‘putting love and unity into the community’ of coastal town, Cayon. They host everything from gospel services to galas for the elderly, car competitions and toddler and tiara shows. In its 20th year, this one is a bit of a legend. The music festival takes place from June 23rd to 25th in the colonial capital of Basseterre at the Warner Park Stadium, and brings in top international music acts like 50 Cent and Busta Rhymes.

Keep an eye out for the boat rides, after parties and beach soirees that make up the festival’s fringe.

If you’re new to Caribbean cuisine and haven’t yet found the taste for goat’s water stew, the annual St Kitts’ Restaurant Week is the perfect time to get tasting. This one-week event begins around the 13th of July and sees St Kitts’ top chefs whip up a storm. Crab back, rock lobster and roti are the delicacies to try. This is one of the biggest and most celebrated festivals in St Kitts.

Cranking up the food appreciation, Restaurant Week coincides with Nevis’ Mango Festival. If you love a juicy mango as much as the locals, get stuck into this three-day celebration. Friday 8th July sees a Mango Madness Fair and Sunday has top chefs doing live demos on Oualie beach.

Culturama is here to make sure no one forgets the old traditions indigenous to the islands. For the first 10 days in August you’ll see dance, dressing-up, folk singing and the calypso music it’s known for. Grab the rum for a week of rumba and rhythm at St Kitts’ Latin Fest. This takes place around the 19th of October for one week and is set up solely to embrace the links Latinos share with the West Indies. As always, there’ll be dancing in the streets along with Latino food, arts and crafts and even a Mexican movie night.

It turns out that while we’re wearing a sarong and trying to rock a fedora, there’s a whole load of high-end fashion houses hidden away in the city. From the 6th to 8th November they showcase the best of their work in the hope of empowering others in the St Kitts’ fashion industry.

Carrying Style Weekend vibes, IFlamboyant is all about supporting creative talent and sees various artists come together across the island to showcase their work. The main event takes place in the Marriot where you can view jewellery, art and glasswork that’s all up for grabs.

I can’t quite work it out, but I think you’ll be hard pushed to see St Kitts when there isn’t a festival on – great news!

Getting to St Kitts

My Favourite Photos from 2 Days in Mykonos
← Previous
La Tomatina: EVERYTHING You Need to Know
Next →
Click here to cancel reply.