I’d heard about the youth-giving qualities of the mud baths in Nha Trang, but during my research of Vietnam I hadn’t heard of the egg baths. I love a gimmick so decided to pay the 300,000 dong (£10) entrance fees and head on up to the hills to check them out.

It was a 150,000 dong trip away from where we were staying in Nha Trang and we made the journey in 15 minutes thanks to Mai Linh taxis, which we were repeatedly told were the safest in Vietnam.

Back to the cappuccino

Within ten minutes of getting in the gates my boyfriend and we found ourselves floating around in runny mud in a six-foot white plastic egg on the side of a mountain. This is when my boyfriend made the coffee analogy, and it was a good one. The mud is meant to knock a few years off you, cleansing your skin and infiltrating your pores with minerals. We rubbed and scrubbed it in to force all the goodness in and the toxins out.

Five minutes later and we were kind of over it, we played a game of hangman with wood on the wall, but the inspiration ran out after ‘Egg’. With the premium ticket we’d bought you could have 20 minutes, but with our restless personalities we were well over done after 15.

What else is included?

Get out and you’re treated to the same rain shower you’re required to take on the way in, and the rain tunnel. Vicious jets of water designed to clean you up good and proper.

You can store your valuables and clothes behind the front desk and in the free lockers respectively. I felt perfectly safe with both. Once you’ve had your mud bath you’re required to have a change of swimsuit. My own red spotted bikini was caked in mud so they gave me a Nha Trang Egg Baths issue top and shorts that were a good few sizes too big for me. Boobsarama. I think everyone saw all I have in the jacuzzi a bit later on. Good job it was the biggest jacuzzi I’ve ever been in, and no one was too close.

The staff here were friendly and helpful – too much according to my boyfriend – but I enjoyed it and felt like a bit of a celeb as they just couldn’t do enough to help us.

With our 300,000 dong ticket we also got access to the mineral pool, the sauna and the steam room. To be honest, I didn’t last very long in any of them seeing as Nha Trang was pretty much a sauna as it was. But I imagine on a colder day, they’d be great.

There was a foot bath place, although we couldn’t work out if that was included on our ticket or not. They said no, pamphlet said yes, and we decided we didn’t really want to sit with our feet in water for 15 minutes anyway. We went for a walk around the complex instead. 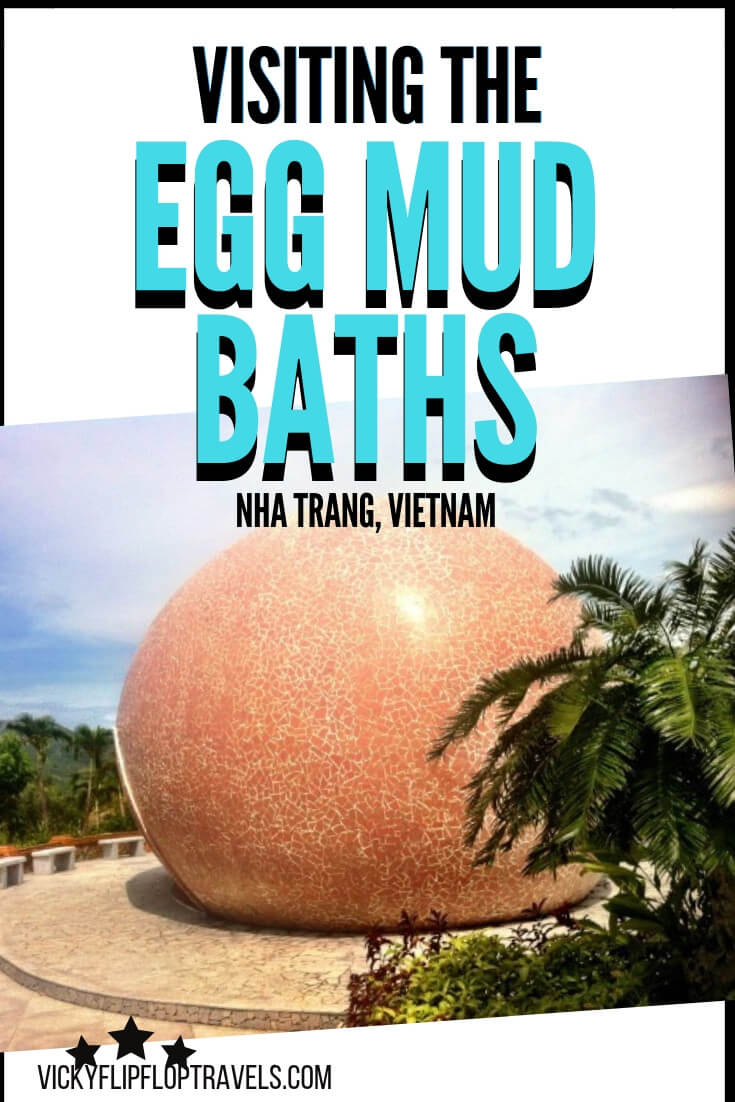 Interesting Facts About Vietnam to Know Before You Go

Anything else to do other than the egg bath?

There was loads more to do at the egg mud baths other than sitting around and spa-ing it up. You could go shopping, kayaking or even rock climbing. There were also a few food outlets there, including The Egg Restaurant which served everything you could ever imagine containing eggs. Stalls sold stuff like burgers and pizzas and there were a few cafes on the grounds too. We only had three hours at the Egg Baths and so just made do with a drink, any longer and I definitely would have though.

The Nha Trang Egg Baths are huge and awesome, though I’d say there were only about 20 of us there. Quadruple that if you include the staff. I’d definitely recommend coming here, but stay a full day and really explore and relax. You could book in for a massage, eat your way around the cafes, or take your own food and make the most of the BBQ picnic area.

After all, how many people can say they’ve had a mud bath in an egg on a mountain side in Vietnam?

More things to do in Nha Trang!

Read up on Vietnam

Thinking About Starting a Travel Blog? Go For It!
← Previous
What Happens at the Voorkamer Festival?
Next →
Click here to cancel reply.

Thanks for the suggestions Peter. I didn't actually make it out to any of the other baths but would love to go again to explore more, hopefully one day!

These baths look awesome. Would’ve loved to see a picture of you inside the egg though – sounds pretty funny ☺.

Ha, I know! It was just too difficult to take my camera in though. Next time!

Hi Jamie, I'm really glad you had a good time! Family of 7? That must have been a lot of fun!