Tips for Using Your Phone Abroad Without ‘Roaming’

When I travel by myself I spend so much more time on my phone. It’s hard to remember (even imagine) going travelling without one.

I use it for everyyyyything.

I’ve been a Three mobile network customer for as long as I can remember – must be over ten years now. One of the best things about being with Three is that they allow you to use your contract in over 70 countries, as part of their Go Roam deal. Almost everywhere I ever go is on it, including Spain, the USA, Australia and Vietnam.

Go Roam makes it so much easier to navigate and travel, as soon as you land. I have never bought a SIM card for a destination, as I can just use my SIM and phone as it is. I pay a set amount each month for my calls, texts and data (£22), and I can just use that in any Go Roam destination. I love it and can’t imagine ever moving.

I don’t even have to worry about turning the roaming off when I travel.

On the rare occasion when I do visit a country Go Roam isn’t active in though, it’s a shock to the system.

In South Korea and Japan – where I’ve been these last two weeks – there’s no free coverage on my contract so I haven’t had 3G / 4G and gawd, it reminds me how much I depend on it.

Connecting in hotels, and even some shops, has kept me sane as obviously I haven’t wanted to turn the roaming on, for fear of charges. So, throughout the day I’ve had to think a little differently to get round my normal phone use habits.

Here are a few tips for using your phone abroad without giving in and turning that ‘roaming’ function on. 1. Send voice notes instead of calling

If your a bit of a chatty Cathy and love using your phone for actual conversations, then get on the voice notes. Means you can send an answer whenever you’ve got the time. Bit like a conversation, only it doesn’t cost a thing and you can upload your spoken messages when you hit the WiFi at the hotel.

This also works when there’s such a time difference. The time difference in South Korea is nine hours ahead of GMT, which leaves a very short window to chat to friends in England, given that I’ll be out and about all day, and my boyfriend et al will be at work. Voice notes are the answer.

2. Plan your trip with screenshots

Instead of rocking up to a city, finding the hotel booking in your emails and then locating it on Google Maps, you’ll have to actually plan where you’re going beforehand, while you’ve still got WiFi.

You could either use one of those paper and pen things, or, you could get snap happy with the screenshots.

I’ve taken SO many screenshots this week of everything I think I could possibly need while I’m out for the day. Close ups of my accommodations, zoom ins of the road, pics of anything notable nearby – you need to be prepared.

Make sure all hotel names, times and places are screenshotted if you’re not going to be connected. 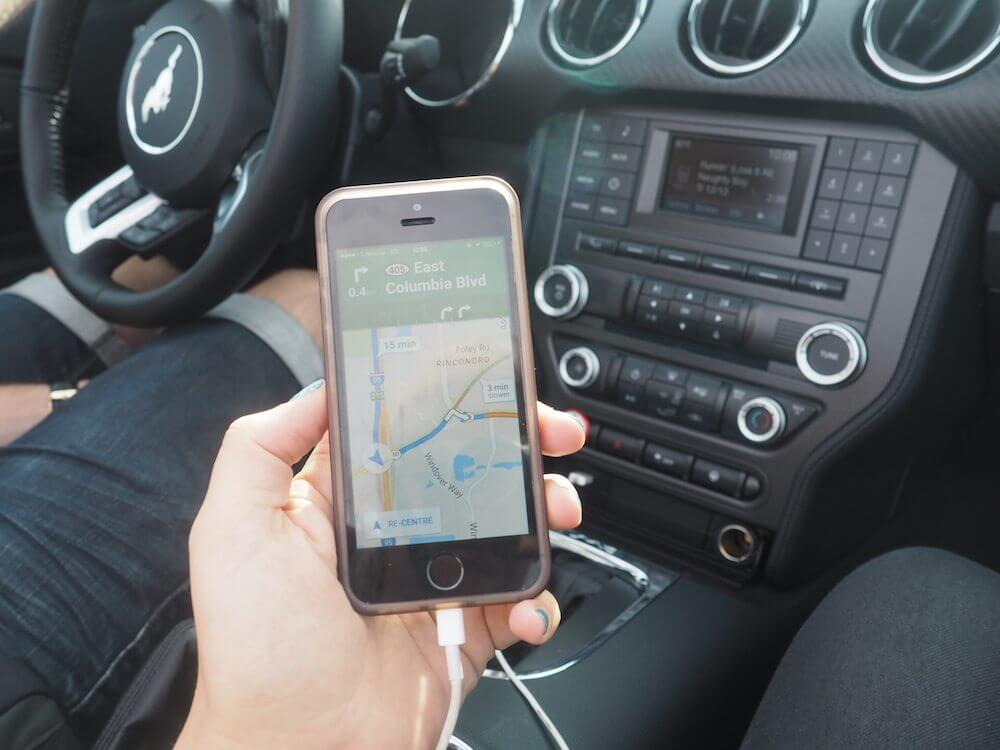 You can still answer messages while your phone is out of connection, but they won’t be sent until you next log on. A good way to get round this is to have them queued up and ready to go on Whatsapp, so no one thinks you’ve forgotten them.

4. Back up your pictures as soon as you get to WiFi

I use Google Photos to back up all my images. As soon as you reach Wi-Fi, click the back up.

This year I lost my phone at Glastonbury. I’d been to Samoa a week before and had turned off the back up option, as you had to pay per MB of WiFi you used. I’d forgotten to turn it back on and with the loss of my phone, was the loss of all my Glasto pics.

I’m still devo about that TBH.

5. Save your Google Maps offline

Me finding directions usually looks like a cat with a toy – head bowing up and down trying to work out where the blue dot is telling me to go next. I’m actually really bad at directions, especially for a travel blogger.

This week though, with not wanting to turn my roaming on abroad, I’ve had to follow the signs, work out my route on a paper map and go wrong several times, to get to where I want to go.

It might be tough to travel without turning your roaming on, but you’ll get through it.

A bit of a break from 3G will be worth it, and realise there’s more to life than looking down. Also, when you do get WiFi, it feels gooooooood.

I remember going to work at summer camp back in 2004, and having to buy a calling card to phone home from a phone box. Same in 2005. Feels like an AGE ago!

Now I totally depend on my phone, and the connectivity, for everything.

My brother lives in Barcelona, my mum and dad are globetrotting in their retirement, and of course, with this blog, I’m often off travelling all over the place, while still trying to keep a relationship. If it wasn’t for the ease of online messaging I don’t know when we’d speak. Even in England I live in the south and my friends are ALL over the place thanks to being from the Midlands, going to uni in the north, and living in London for 7 years. Seeing as a lot of friends have either moved away, or had children, communication could be difficult.

Thanks to my phone, I know what’s happening in their lives, and they know what’s going on in mine. My phone and the internet is literally my lifeline to my friends and I’d be lost without it (as I have often been this week!).

I’ve been a customer of Three for over 10 years now, and love, love, love their Go Roam feature. There are 71 countries where you can continue using your phone as you do in the UK. It’s amazing and has saved me a lot of hassle and headaches around the world.

This post is a paid partnership article with Three, as part of their Phones Are Good Campaign. Three believe that phones have been getting too hard a time recently. Far from bringing the end to humanity, they think they bring people together. Think about it. These pocket rockets help us plan our social life, find love, build relations, run businesses and make memories. Three asked me to share my personal experiences on why phones are good. These opinions, stories and images are my own.