Every year £1000s are wasted by festivalgoers being too lazy to bring their stuff back home again once they’ve used it. That’s my stat, I don’t need science, I’ve seen it with my own eyes.

I remember Bestival 2015 in particular – it was the height of the refugee crisis in the news. They were desperate for tents and warmth at the borders, while in festival world, at Bestival, tents and warmth were just being left where they were erected or laid out, in the festival grounds. Bestival organisers tried. They’d cordoned off a designated area to donate stuff that was intact, as we did, but there were only about 5 tents there, while the rest of them were half up around the site, blowing in the wind. 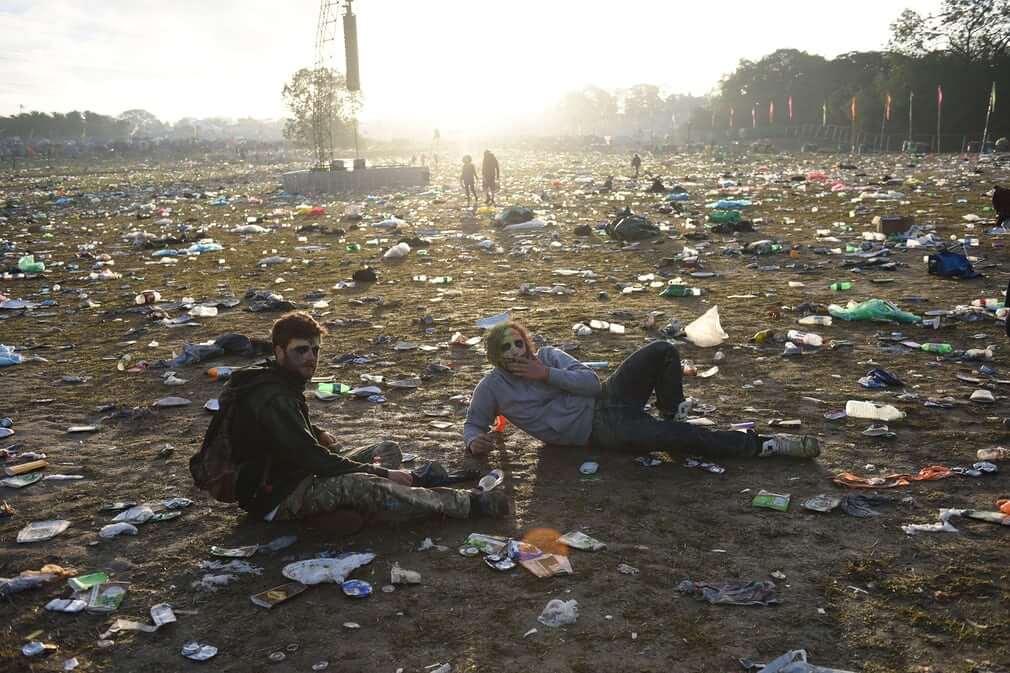 Photo from Glastonbury Clean Up in Pictures on The Guardian. Take a look at the rest of them!

What can you do?

There’s no denying it, field festivals are bad for the environment. The energy used, the plastic, the cigarettes, the amount of people – you might not have much control over that, but what you do have control over is what happens to your festival stuff once the music has stopped.

Technically, leaving your stuff behind is littering, which is an offence. Once it’s been sorted through, some of it goes to charity, but most, goes to landfill sites. Landfill! Thousands of tents, camping chairs and air mattresses, used once and dumped.

Glastonbury Festival told the Guardian it cost £780,000 to clean up the festival in 2016 – it would’ve be a lot more if it wasn’t for their army of volunteers.

Glastonbury tries with ‘Leave No Trace’, Reading Festival with ‘Love Your Tent’ but the slogans don’t work if no one follows the sentiment. It’s down to the attendees to be bothered to bring their stuff home again. So what if you could stop your stuff going to landfill, and make a bit of money at the same time?

Well you can. Here’s what you should do with all your leftover equipment instead. – Festival No 6 looking so fresh and so clean

1. Bring your stuff home from the festival, for the reasons above.

2. Clean everything up the best you can.

4. Take a range of photos of the item you’re trying to sell – these can easily be done on your phone and uploaded via the Gumtree Mobile App.

5. Write a full description of the product to give the seller all of the information they need – it’ll help it sell quicker.

6. Sit back and wait for the offers to come flooding in.

7. Arrange for them to collect, or if you’re feeling generous, you could deliver to them

8. Spend your new riches on something exciting – errr…. festival tickets?

Buying and selling your festival gear Gumtree is an absolute gold mine for festival goodies, especially this time of year. A quick search for a tent in my postcode brings up 21 good priced, and great looking quality tents. If I search for ‘camping’ in my postcode I get camping chairs, a cooker, a cooking set – all for cheap too. Most of the stuff has probably only been used once or twice, and then just sat in sheds and garages. It’s easy to make money, and / or save money.

You can sell roll mats, air beds, portable BBQs – pretty much anything you have. There’s no need to leave anything at the festival. It’s a waste of resources, your money, the festival’s money clearing it up, and you can sell it on to stay eco friendly.

Check out Gumtree to find out more!

Check out my packing list for Glasto, or all festivals really!