I took so many photos of my Medsailors Croatia trip from Split to Dubrovnik. Every day we’d wake up to stunning views of the coastline from the boat, and as the landscapes unfolded as we sailed by, the level of beauty never changed.

I couldn’t help myself but snap away. I thought I’d share a few of my favourite photos, alongside a little ‘tit bit’ of what was actually going on. As if, like in the olden days, we were sat together with a cup of tea and a biscuit flipping through my holiday photo album.

Coffee to start the day, every day 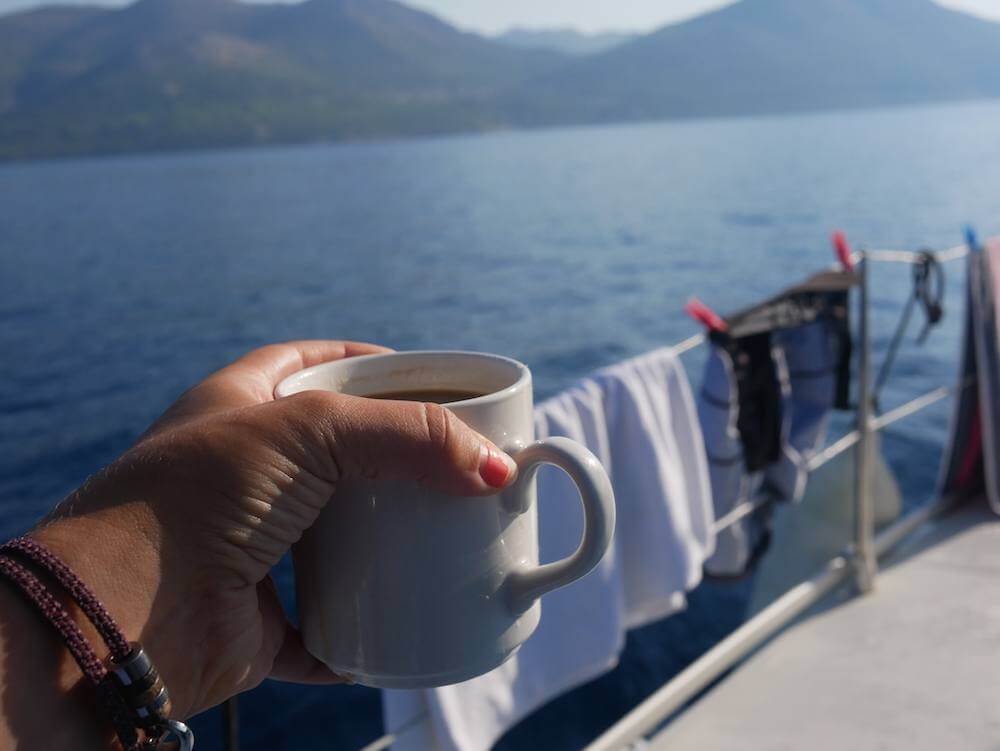 With a kettle and all the tea and coffee facilities downstairs the brews kept on coming. I’d wake up, be desperate to get out of our stuffy room, and so come up on deck and make a cup of coffee. Sitting up top, thinking of everyone else rushing about trying to fit in their morning coffee between the commute and work, while I could enjoy the simple act of the coffee sip, made me feel very happy and relaxed. 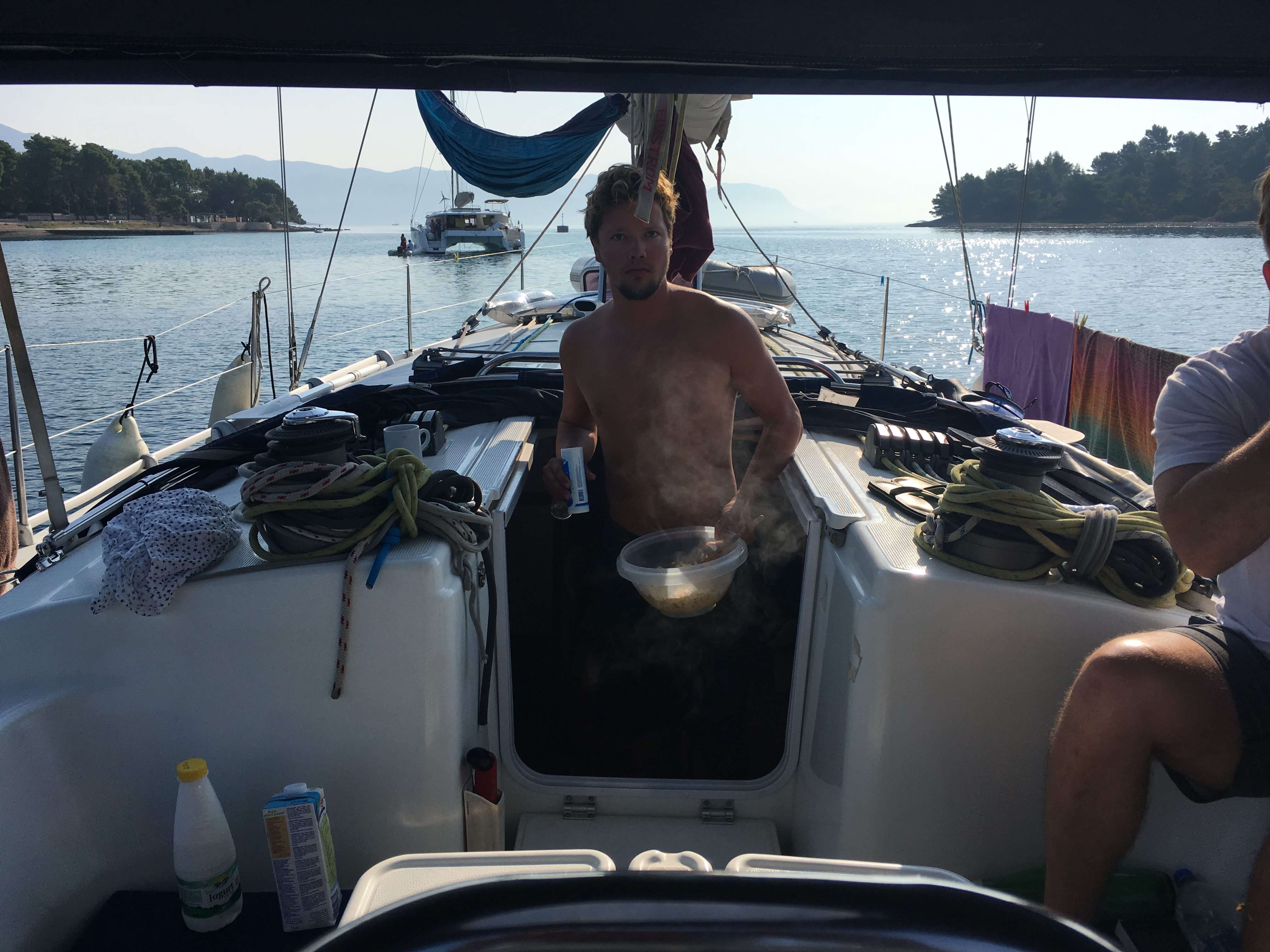 Good old Skipper Dan. I think I must’ve snapped this at the only time he wasn’t smiling. He made us breakfast and lunch every day from the little stove and fridge on the boat and here he is bringing us up some scrambled eggs.

Dan was great. He was only 22ish but had sailed all over the world. He was such an interesting guy to chat to and had lots of funny stories about past guests and his experiences sailing.

You know me, I love to get the gossip. His stories and experience reminded me of my time at summer camp. I really feel like anyone who can, at that age, should do some sort of amazing summer experience. My summer at camp was the best I’ve ever had.

Watching the fishing in Korcula 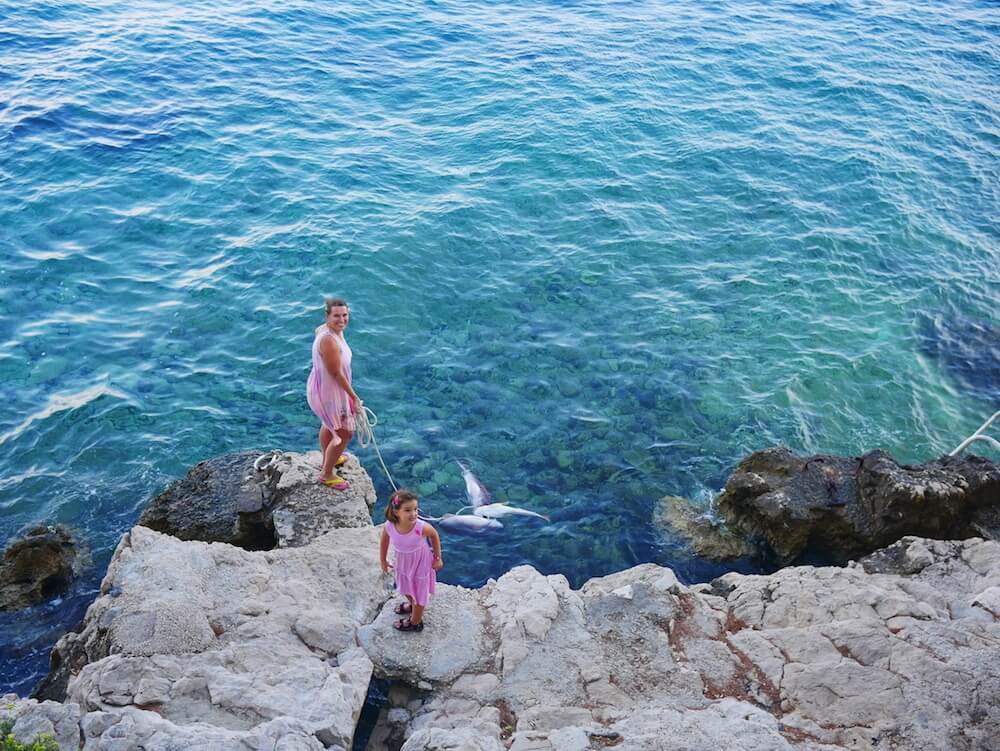 My friend Jen and I were sat enjoying a glass of wine on Korcula, one of the islands. We’d asked the waiter which wine we should choose. He recommended one, charming us, and so we took him up on it. Of course when the bill came it was 70 krona, around £8.20, each. School boy error.

But at least we’d had the entertainment from these two ladies. They’d been stood gesturing at a boat, as it came in. The fisherman leant out and passed a rope, which on further inspection I realised had three huge fish attached. She then stood there for around 20 minutes, waiting for something, but laughing and joking to someone, with a big grin on her face.

It was such an interesting glimpse of life living in a fishing town. Was the fish for her? Was that her husband? Were they going to sell it to the tourist restaurants? Will the little girl follow in her footsteps?

I love people watching the locals. For some reason I thought it would be really fun to jump in the water, get someone on the boat to pass me some bread and then try and entice the fishies with it to take a cool selfie. I really hope this is an RSPCA-acceptable thing to do.

Anyway, as soon as I had the bread in my hand the fishies came a swarming. I got really panicky and scared because they were everywhere and dropped the bread. Then I’d got my snorkel too far under the water as I tried to retrieve it and started choking on the lungful of saltwater I’d just inhaled. I knew they were watching me on the boat so tried to keep my cool.

I attempted to grab the bread again, while coughing into the snorkel and having a strong word with myself to calm it. I chilled out, accepted that of course the fish weren’t going to hurt me and in the end, after all that, got these crappy photos. Oops.

(Watching the) boys being boys 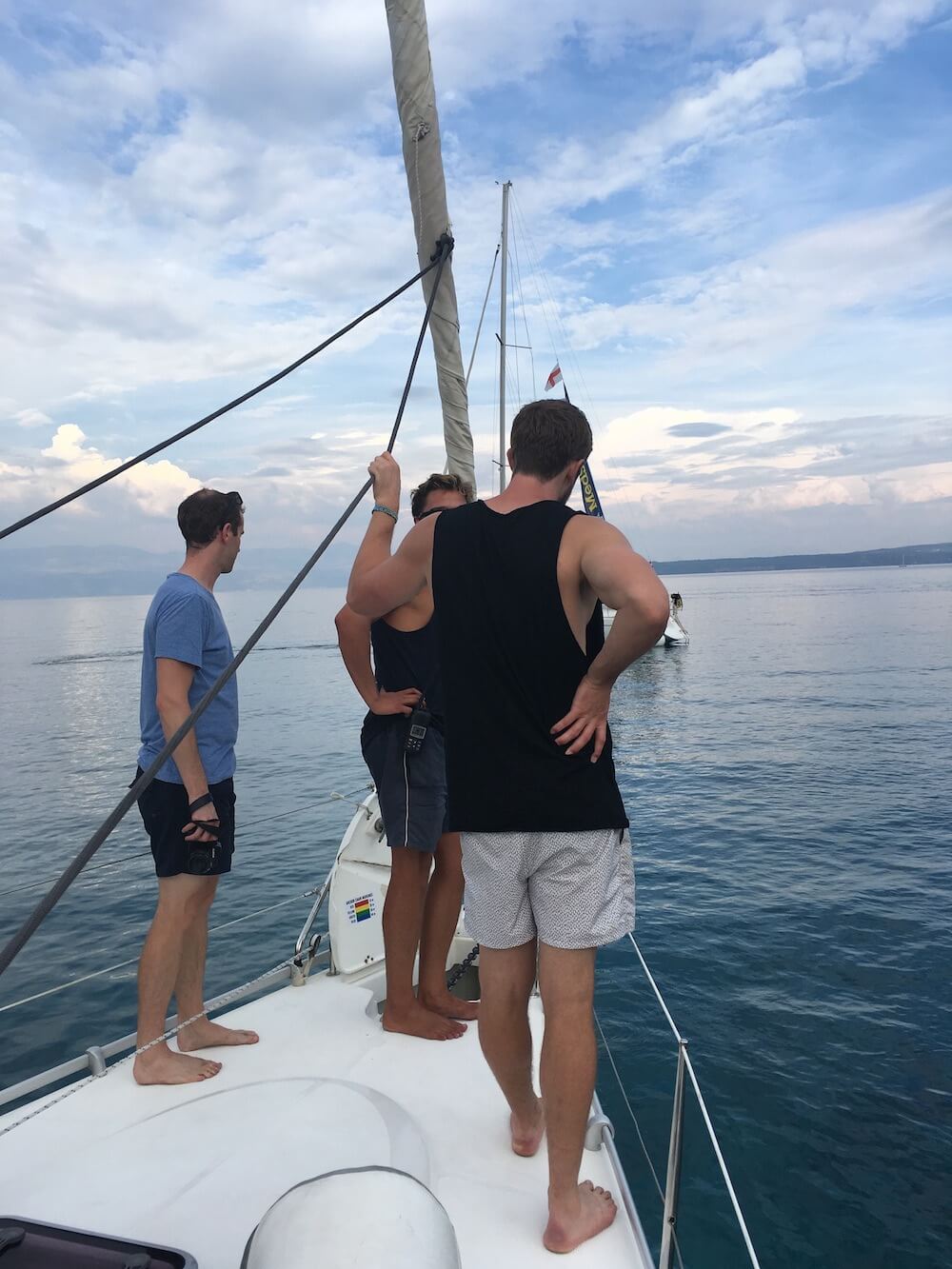 As an absolute, total feminist I wanted to help out, to do as the boys did, but lying down in the hammock, reading my book, just seemed so much more appealing. So I need to put my hands up and confess to not helping with the mooring or sailing one bit.

Skipper Dan had taught us a bit about the boat on the first day and from then on got the guys to pull up and put down the anchor.

I took on more of a supervisory role and left them to it. 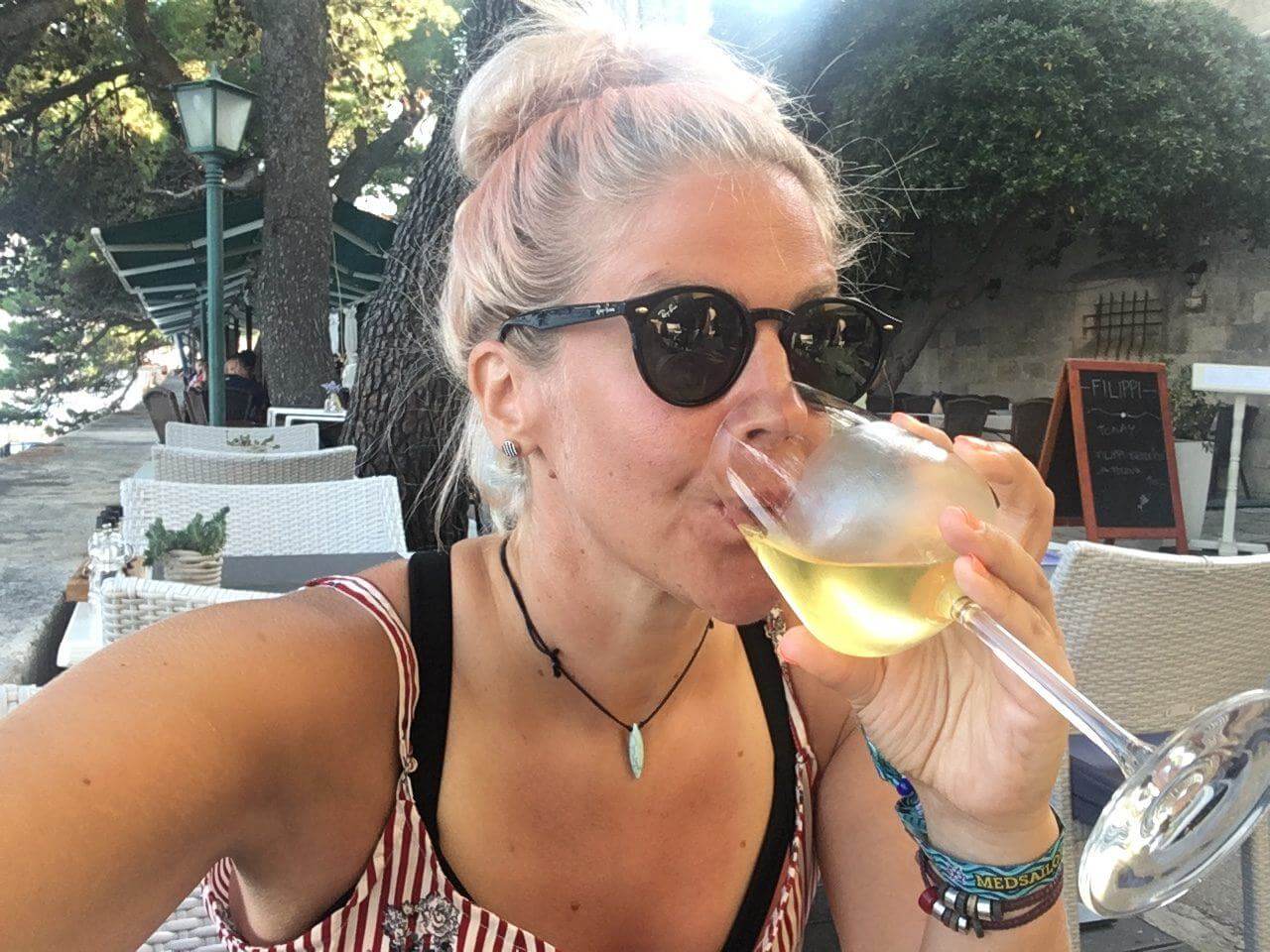 Have to say, I wasn’t impressed with the Croatian wine. Particularly this one. This was the £8 one I mentioned earlier – too yellow isn’t it?

I’m going to Croatia again this weekend and have signed up for a wine tasting as I want to like the Croatian wine, I think I just didn’t know which one to go for. Just for you, I’ll battle on and try some more.

After the disappointment here I stuck to gin and tonic from then on. Beautiful setting though, and look at the black board behind my head – basically got my name on it. I find it very hard to be interested in pizza that isn’t covered in:

Lucky for me you could pretty much get anything at the Alfa Pizzeria in Vela Luka. And this was YUM. The base was incredible too. The restaurant looked out over the marina and we got ice cream on the way home. Went to bed very satisfied that night.

Scenery even more amazing than it looks One of the best aspects of sailing, apart from all the chilling out, is the amazing scenery you’ll see from off the boat. From places like the monastery above, to hill carved villages, the other multi-million pound boats, and the azure waters in contrast to the green hills.

It can be tempting to sit and read a book but you don’t want to take one that hooks you in too much or you’ll risk missing some of the beautiful coastal sights of the Med. Which is kind of the whole point of the trip, right?

Finding a spot on the boat In my eyes, the hammock was clearly the best spot on the boat. And lucky for us, we had the best hammock from the selection on our fleet of boats. With ours you could fold yourself in like a caterpillar in a cocoon.

As soon as any wind got up though, the hammock was pretty much the worst spot on the boat. It started swinging wildly from right to left and back again. You don’t want to be that person who’s stuck in it when the boat starts speeding along, looking like a fool.

Strategically nestle yourself in as soon as the boat comes to a stop, with a book and the sun beating down. Life doesn’t get much better. 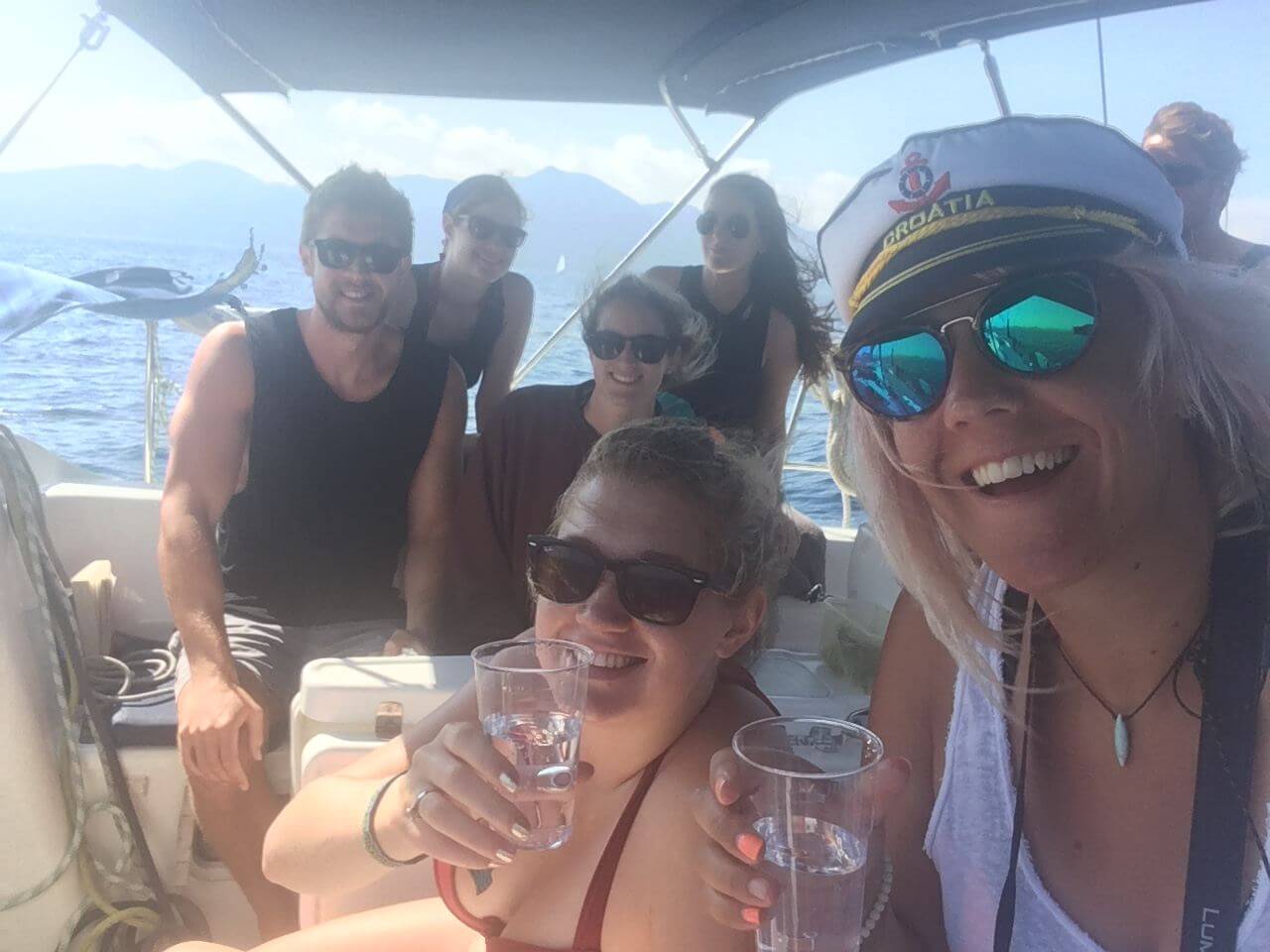 Jen and I bought a litre of gin for our week on the boat, and six bottles of tonic for some reason. We miscalculated there. Anyway, the other guys bought gin too, and we bought another bottle halfway through, for the team. Safe to say we were well lubricated. Not drunk though, that’s uncouth.

Just a nice glass or two of an afternoon while reading a book and admiring the view. I hope I never forget that feeling.

Abseiling the cave in Mljet 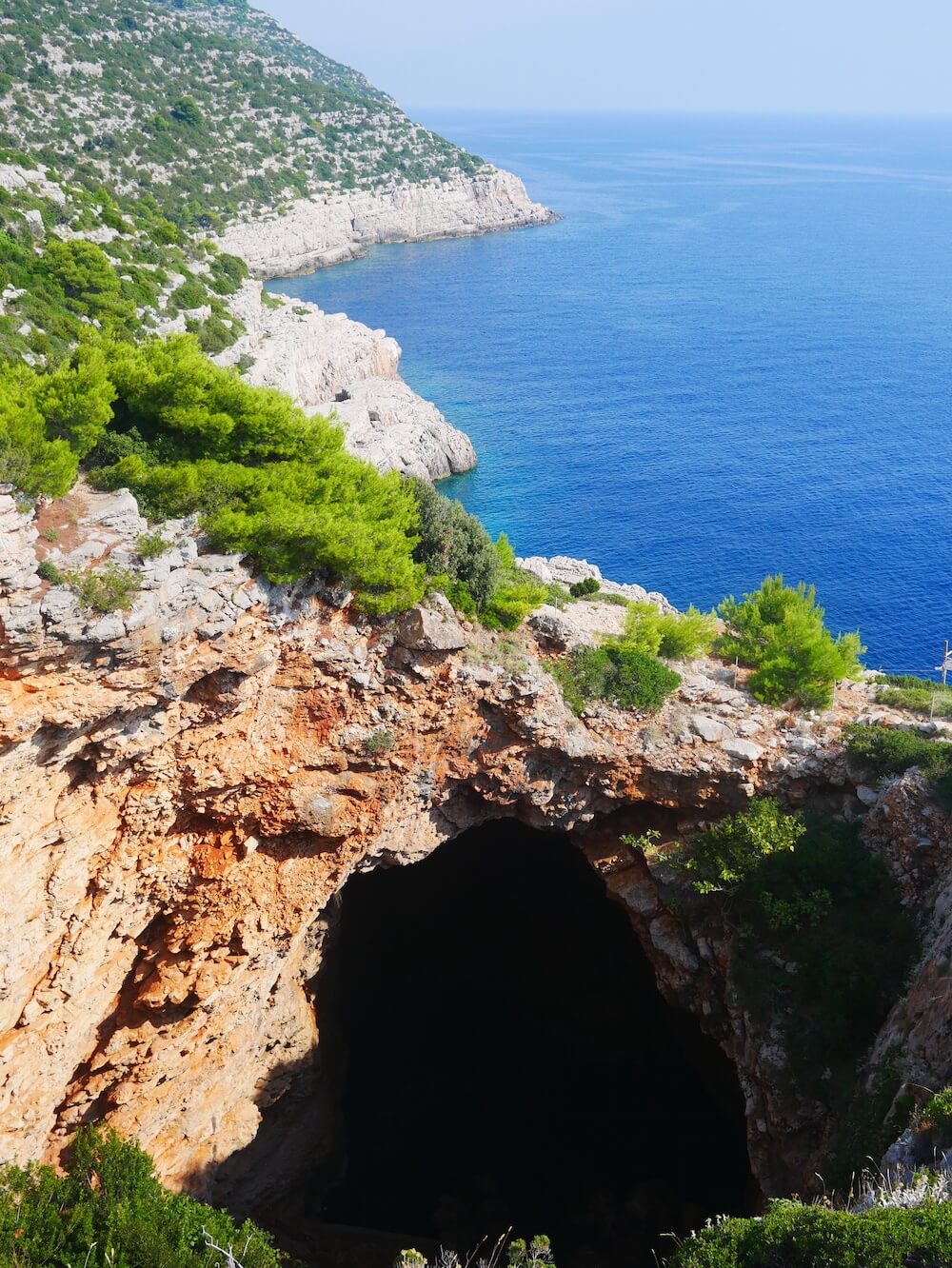 “Hire a car”, they said. “Go and see the caves”, they said. “It’ll be fun”, they said. We followed instructions, thinking we were in for a fun adventure. Unfortunately we failed to notice the beautifully carved steps leading down the side of the Odysseus Cave and thought that the only way down was to use the rope we’d seen, via an abseil.

No equipment, wearing flip flops, big towels round our neck and no number to phone Skipper Dan if anything should go wrong, we decided to go for it, down that big dark hole you see above.

We hid our stuff behind a rock and then swam through the cave, out to the other side, where we found some of the guys off another boat gracefully coming down the steps.

Seeing as we had our stuff (like phones) we couldn’t go back up the steps, but we had to climb up the ravine, with only the rope and flip flops for safety. I went first and as the little rocks fell below me, I had to call out to Jen to wait till I was up the top before she started. Didn’t want to knock her out.

I made it up and she followed a few minutes later – pale, legs shaking and more angry than I’ve ever seen her in our four years of friendship.

It was a stupid thing to do. Funny now it’s over though…

Driving stick for the first time in TEN years 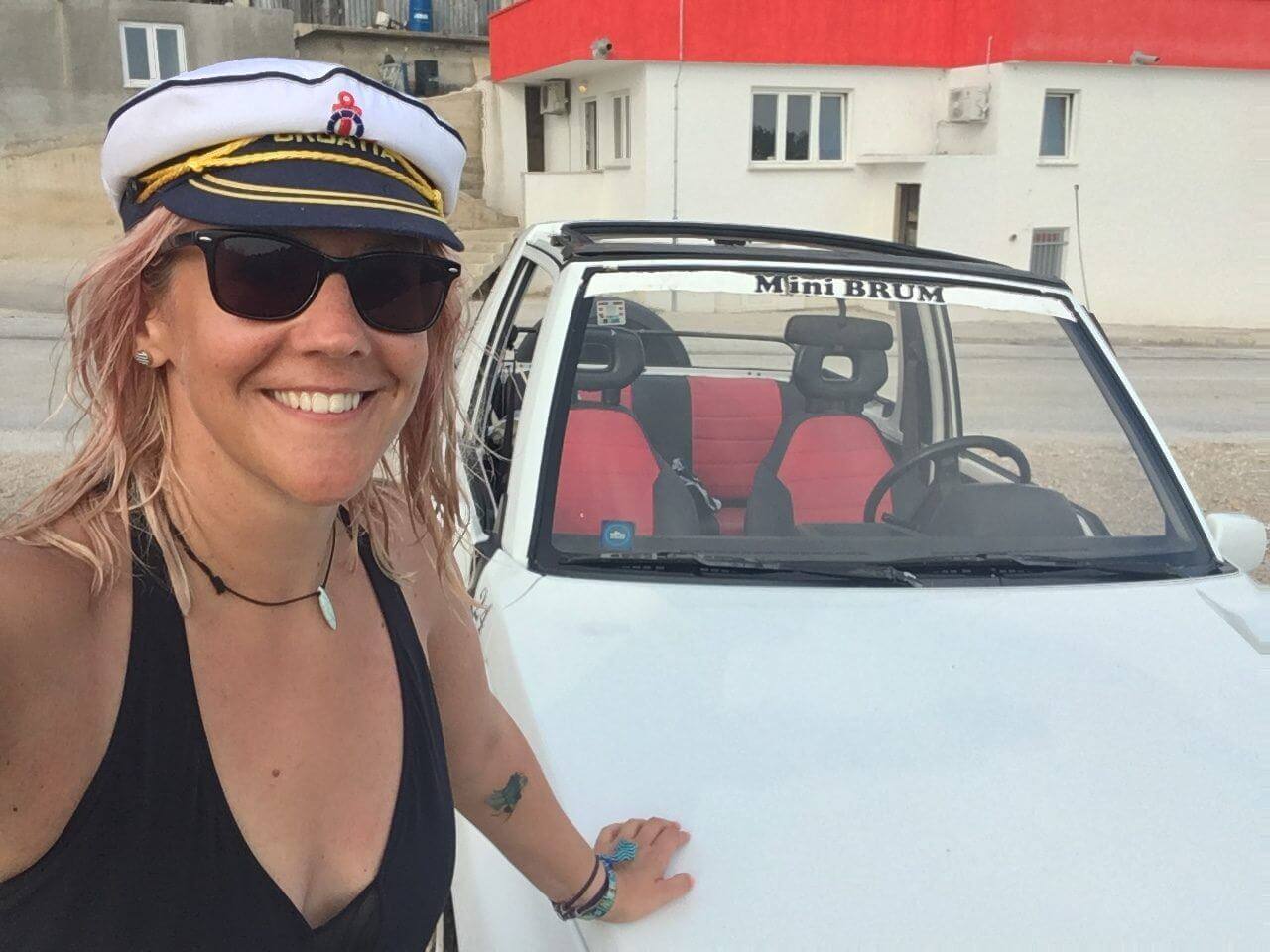 Apart from the getting in and out of the cave part, renting the car on Mljet Island was awesome. We went for the white jeep, just because it looked coolest and I was thinking we’d look a bit Sweet Valley High / Clueless in it.

I was all enthusiastic about driving then got in the driver’s seat and realised I hadn’t driven stick for about ten years. Ten years! Decided that driving around a mountainous island with huge drops probably wasn’t the best way to get back into the swing of things.

But then an hour of Jen driving later and I decided to give it a go. A quick lesson in gears from her and it all came back to me, kind of. Here’s me super concentrating on not falling off the edge. My heart was all bum de bum. Sticking my tongue out definitely helped.

We ended up picking up some German hitch hikers and taking them a kilometre down the road to the supermarket. They were definitely more afraid of us than we were of them – pretty sure they thought we were insane. Oh and we had to stop for photos regularly, obviously.

Watching the sunset from a castle in Korcula 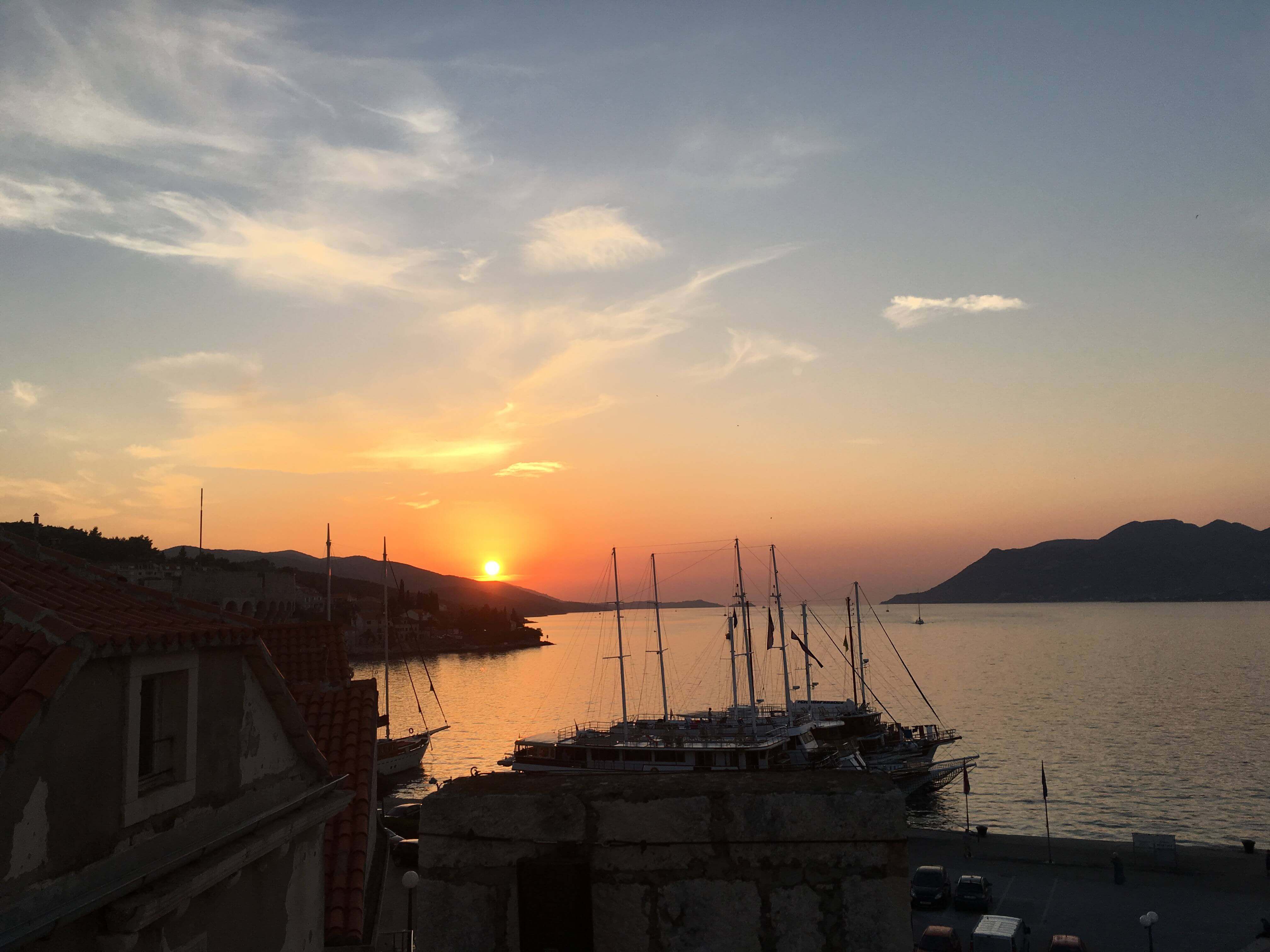 We climbed up the stairs and ladders to get to the top of this castle in Korcula. This was the spot on the island to watch the sunset from. Because the castle was so tall and thin they developed a pulley system to send the cocktails up from the bar on the ground floor. 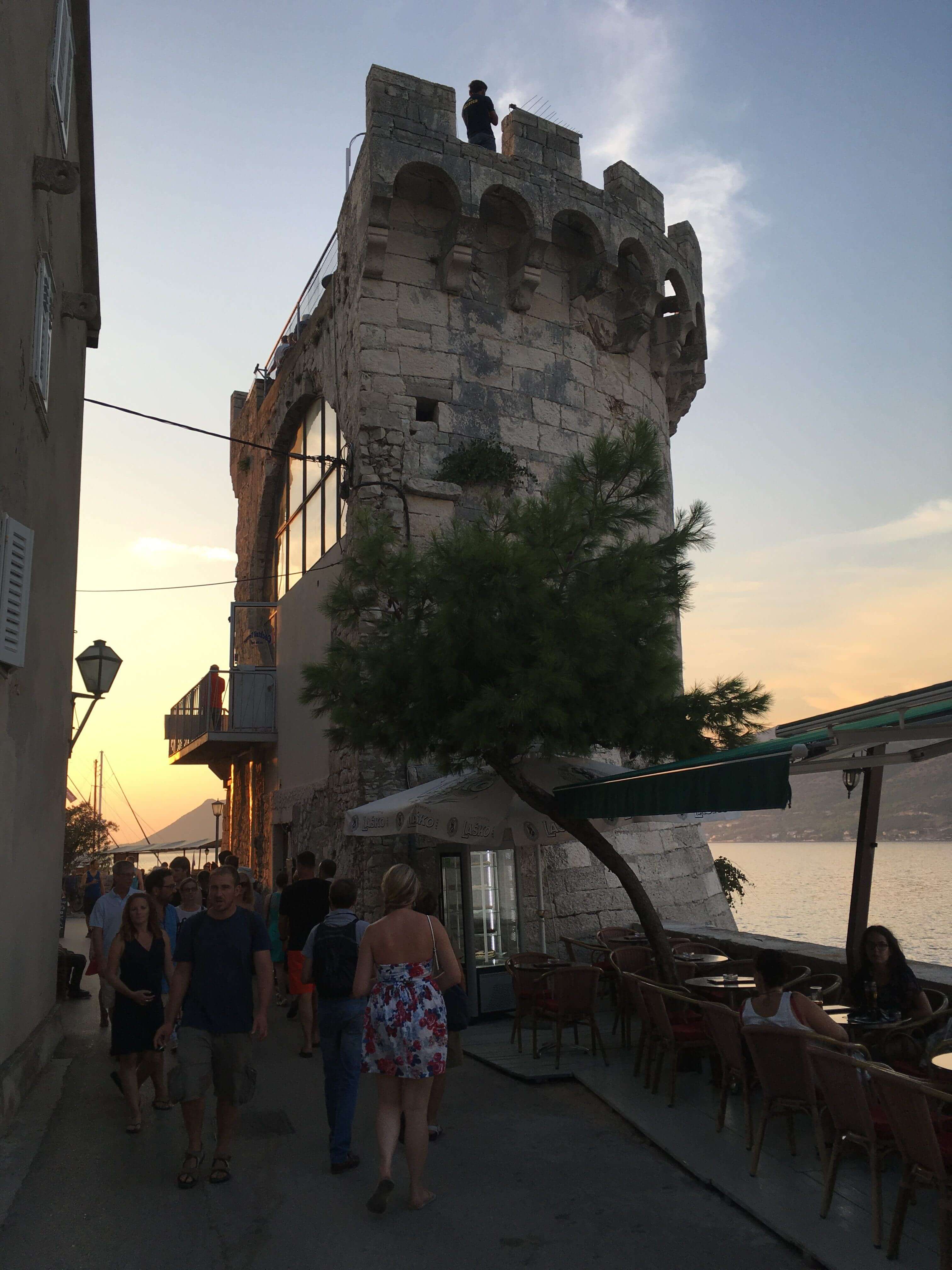 It was fun up there, but you know when you’re at the place to be and everyone else is there too? And then tempers start getting frayed and people are being unnecessarily territorial about ‘their space’? 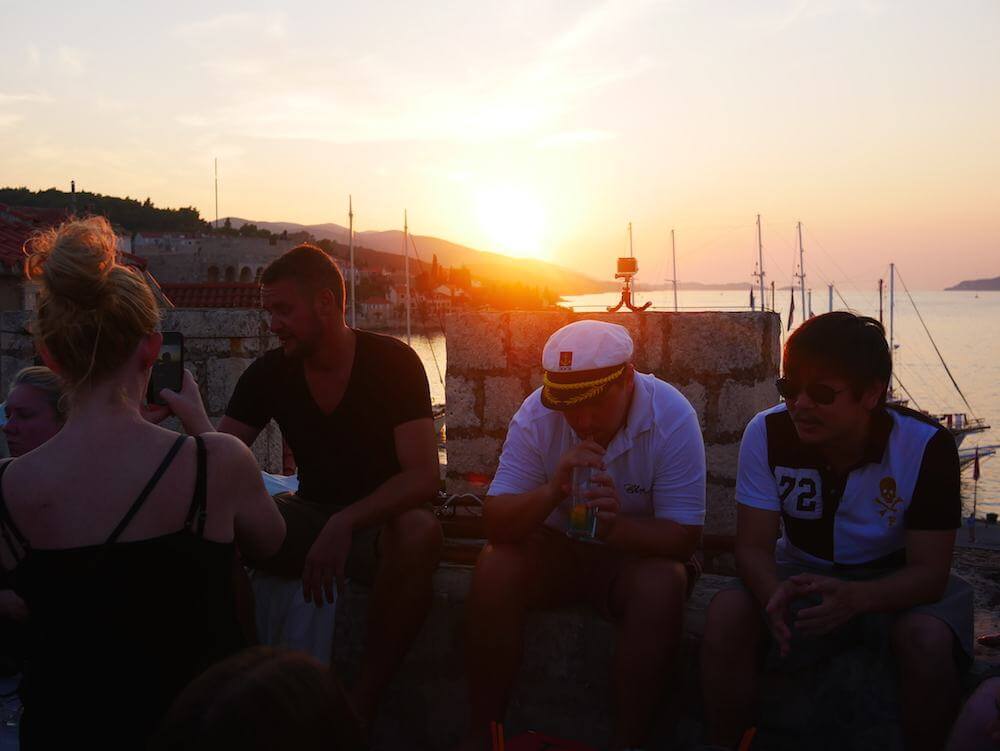 A canoe welcome on arrival into Dubrovnik

These are the big castle walls that surround Dubrovnik and signified the end of our Croatia sailing trip. Sad times. There were about 30-50 people canoeing their way round, which to be honest, looked traumatic.

We were sat safe up on our Medsailors boat and could feel the waves but they were stuck in the herd of canoers with the sea getting choppier and choppier. No thanks. 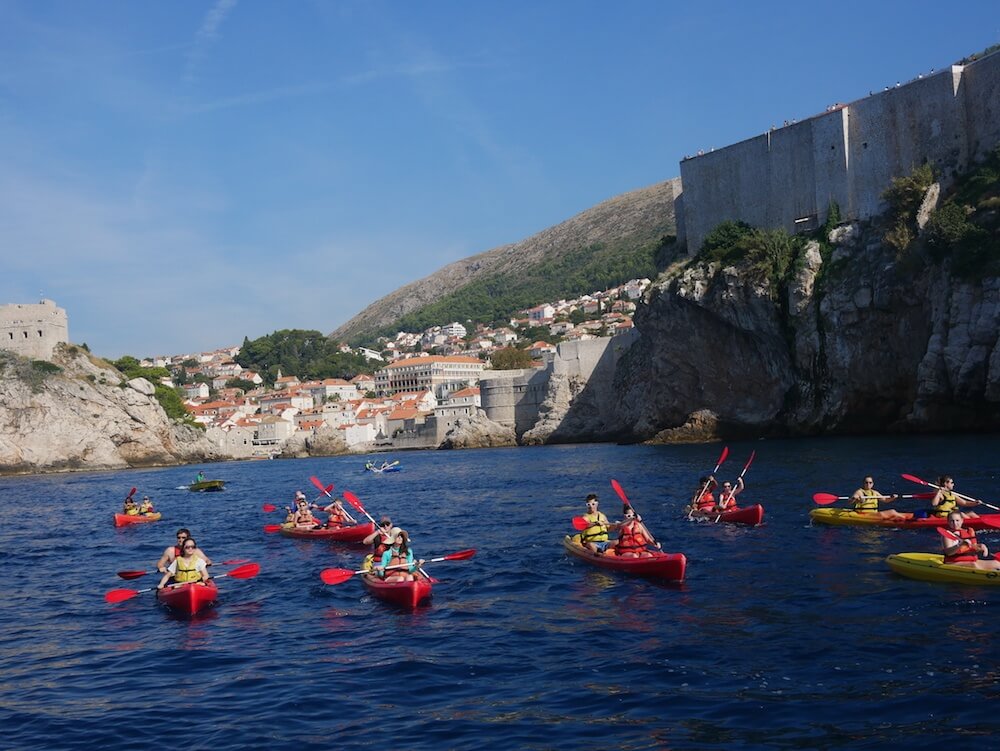 It was really cool to sail round the walls though and nice of our skipper to show us the walls from the outside.

From there we headed back to the marina, and the trip was over. – I went on the Split to Dubrovnik Voyager Medsailors Trip as a guest in return for a review. All the above is my honest opinion – great trip, loved it!

More on my sailing antics