It’s a unique concept, one that I found confusing to understand until I travelled to Darling an hour from Cape Town in South Africa, to attend the annual Voorkamer Festival and experience it for myself. Let me explain… 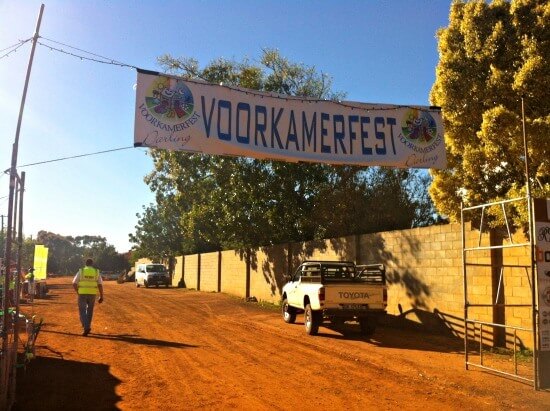 There are seven routes. You buy a ticket, which gives you access to a route. The route includes entrance fees to the houses, and your taxi fare to get you along the route.

Along ‘a route’ there are three performances held in random houses within a few minutes radius of the main Voorkamer Festival site. The acts could be anything from hip hop heroes to juggling stars to master poets. You don’t know until you arrive. Each slot is 25 minutes long.

The main Voorkamer Festival site is at Evita se Perron – a beautiful estate that belongs to the national hero Pieter-Dyrk Uys. He’s an activist, performer and entertainer who’s passionate about Darling, and South Africa as a whole. Also known as Evita se Perron, he’s kind of like the equivalent to Lily Savage or Dame Edna Everage, except he likes to introduce a political slant into his comedy too.

The onsite Darling Museum showcased letters to and from Pieter/Evita from the likes of Nelson Mandela and Desmond Tutu. You’re free to take a look around at his gardens, filled with politically themed installations and artwork, and have a drink from the bar.

Every year Evita puts on a show at midday for anyone unable to get a ticket to the routes, as they book out in advance. After interviewing him I watched the show, and even for a non-Afrikaan speaking Brit like me it was funny. His jokes were crude and to the point, but also with a strong political message. The locals were almost wetting themselves laughing.

At the main festival site you’ll find a range of artisan food and drink. Local brewery Darling Brew had set up a beer stand that stayed busy all day, although not as busy as the two wine stalls that couldn’t keep up with the mainly well to do crowd. For just 50 rand you could buy a bottle of wine to drink on site, you just needed to pay a small deposit for the glass and you were sorted for the day. There was a organic beef wrap stall, a BBQ feast, chicken burgers, super fancy mushroom kebabs, cakes, curries, samosas and burgers to choose from. I can definitely vouch for the beef vermicelli wrap, chicken burger and Darling Brew, sadly didn’t manage to eat as much as I’d hoped. There were also crafts and clothes, I bought Waiels a little beaded gecko. I got there early, too early at 9am. I’d recommend arriving for around 11am so you can get your bearings before the noon o’clock routes begin.

There was a big tent in the middle for us to seek solstice from the powerful sun, although I’m told last year this was for the rain.

I was booked onto the 5pm Route 7. The whole Voorkamer Festival must be a logistical nightmare, but you wouldn’t know it thanks for the slickness of the staff. We were on the bus and on the way with our friendly taxi driver quicker than you could say Evita se Perron.

You’d never get to see all seven routes and you’ll never have the same route repeated, that’s what keeps the mystery of the festival. All I know is that my route looked a bit like this… 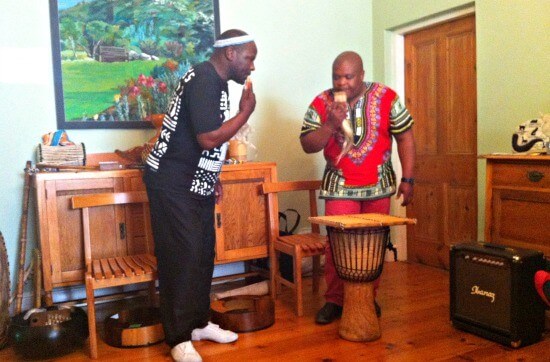 A local African instrument professor and his right hand man showcased their instrument repertoire. He told us how the Ugubhu was measured to fit the lady owner and would be cupped over her breast. This would serve as an early diagnosis of pregnancy as the vibrations would wake the baby inside up, so the story goes. He also showed us the Kalimba box and the rain drum. The 25 minutes here went way too fast. We were soon shown out the door by the owners of the house and driven less than five minutes to our next show.

2. Peter De Graef, Punishment, in a two-room home in the Bronx 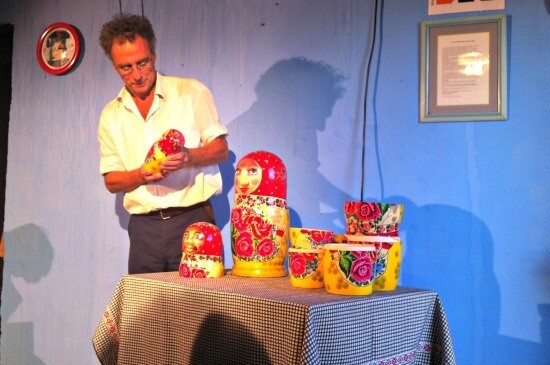 The proud homeowner opened by telling us a little about his house, he’d been building it up for 20 years and joked he still had a long way to go. This was a million miles away from the previous dwelling. He introduced ‘his’ artist, Peter De Graef. He was Dutch and the monologue we were about to see had been performed for the Queen of the Netherlands, but no one else, until now.

He bought out a set of adapted Russian dolls and started telling his story. I was looking at him, but the words weren’t going in and I wondered who this crackpot in front of me was. I soon settled into his dialogue though, and followed the tale of woe. Now this story is easy to ruin with a spoiler, as it’s a few punchlines that hold it together. All I will say, is that this is one of the most heartwrenching stories I’ve ever heard, and if Peter is ever near you, you should go and see him tell it. Everyone on the bus was affected. even more so thanks to the setting on the run down council estate.

3. A poet in an even smaller council house 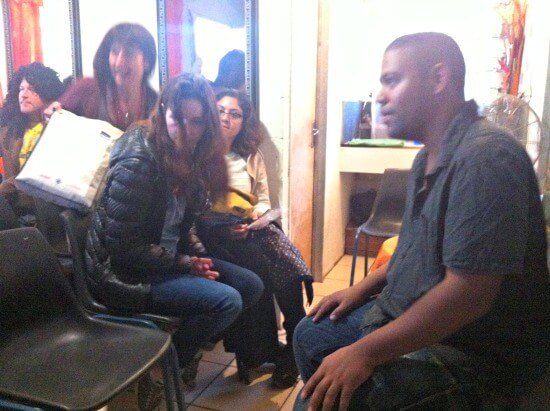 The 25 of us crammed into the front room of this tiny house, still reeling from the story Peter had told us. Here we found a 20something lad who was going to read us some poetry from his book. Unfortunately for me it was all in Afrikaan, so I didn’t have a clue what was being said. After I found out there was a lot of anger in those words, and people didn’t like the swearing and cussing. As he’d told us at the start though, this was the language of his people. I’m sure for anyone who understood – this was an interesting act very different to the previous two, which is what the festival is about.

When we got out darkness had descended and we were driven back to Evita se Perron. The 10 or so people in my taxi were all still abuzz about Peter’s performance though.

In the evening there’s a party and a feast, which unfortunately I hadn’t been prepared enough for and so had to miss out on. Another glass of wine and a chicken burger around one of the log fires they’d set up and it was time to go home. 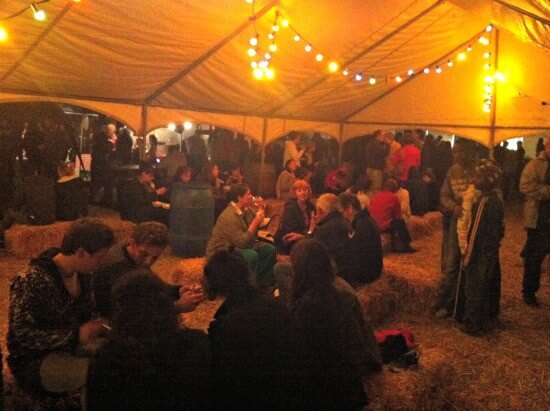 Darling is an hour from Cape Town and the journey is absolutely stunning – you’ll pass vineyards, golf courses and acres of green land. Hire a car and do the trip yourself, or give my mate and guide for the trip Norman a call and see if he’s free to take you. Voorkamer seemed to attract a local crowd. A wealthy white crowd who wanted a day of entertainment with good wine and great food. The Voorkamer Festival was awesome. Evita se Perron is the perfect venue for it, getting around was slick and organised, the acts were unique and original and I’d never experienced a festival anywhere like it.

Voorkamer Festival brings thousands of people a year to a little township an hour from Cape Town. It pumps some cash into the stalls at the festival, but to the town as well. In the taxi, which was more like a mini bus, my fellow passengers were talking about how they had difficulty finding accommodation and that they should book for next year.

If you’re planning a trip to Cape Town you should definitely plan for September. Voorkamer is held annually on the first weekend of the month. Try and make it out there for the full two days though, I definitely could’ve stayed longer.