The creative and imaginative rush to Karoo, South Africa, every April, to participate in the one-of-a-kind AfrikaBurn festival. Hosted in the heart of the Tankwa National Park’s sizzling hot summer sun, AfrikaBurn tests endurance and survival skills all in the name of fun.

Judging by the photos AfrikaBurn looks like the sweet spot where eccentricity meets beauty – toned bodies dress up in crazy outfits to dance, explore and express themselves. But what else do they do there? I’ve been very close to booking a trip to see AfrikaBurn for myself a few times, but never quite made it. I didn’t want to leave such an important festival off the blog though, and so here’s a guest post from Melanie du Toit to give us first timers a guide to AfrikaBurn and what to expect.

‘Burners’ from all over the globe gather in unity, to create a spectacular temporary city full of art, costumes, music, performances and theme camps. Everything that AfrikaBurn offers are provided by volunteers and festival goers.

Resembling the international Burning Man Festival; locals build huge wooden constructions which they set alight in the evenings throughout the festival’s duration.

What should I expect from AfrikaBurn? 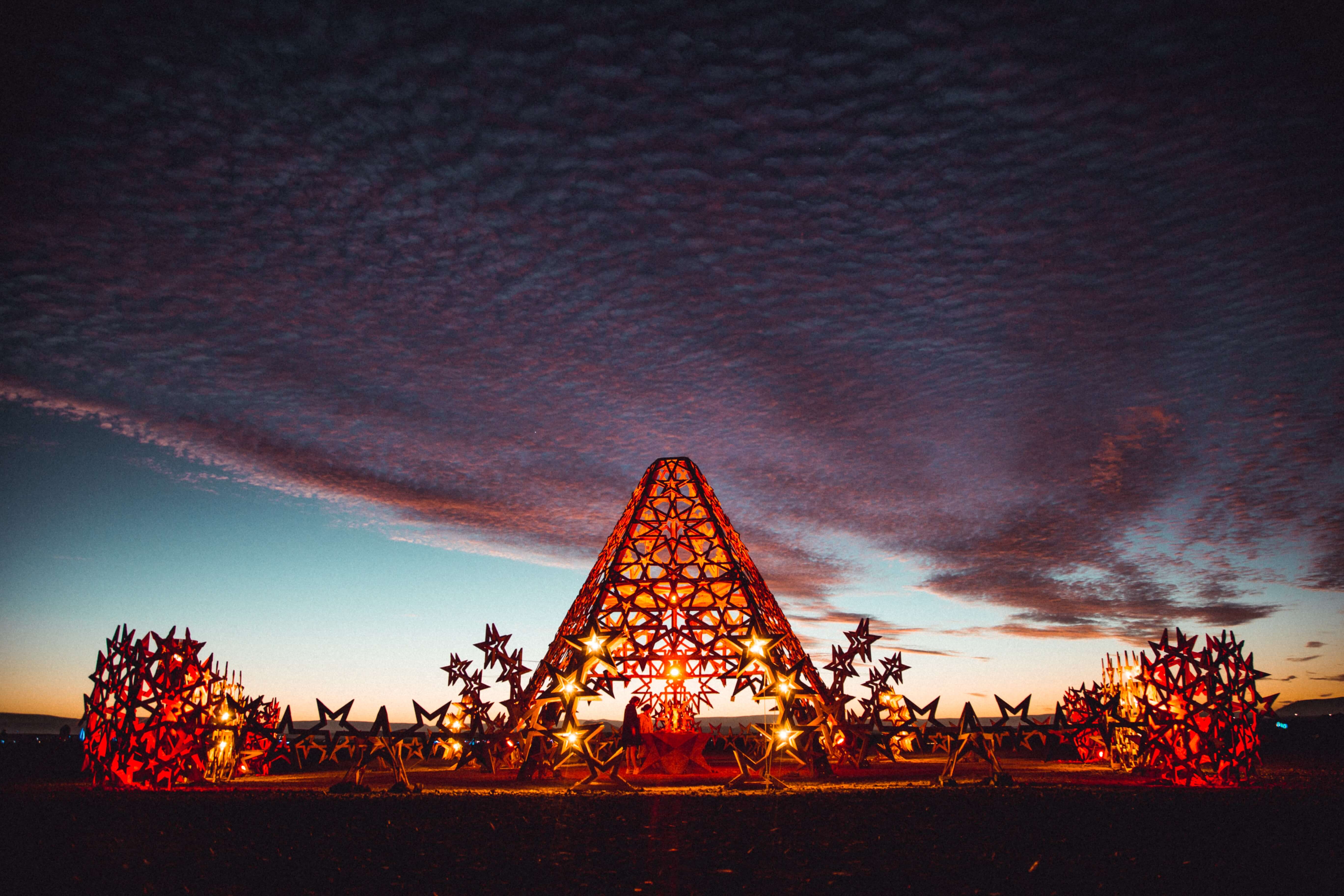 What makes this a special event to participate in, is the fact that you’ll be surviving in an extreme environment. Expect to be completely switched off from the world, without any cellular service or convenience stores nearby. There’s no means of contacting your festival friends if you lose them, and ancient ways of communication are once again discovered – like following a map.

Normal festival packing list items like a water bottle, one-man tent, shampoo and a few snacks won’t be efficient enough. AfrikaBurn is in the middle of a remote desert, there isn’t even any sufficient electrical power supplied, unless you bring your own power generator.

Expect to be blown away! By the creativity of artists who exhibit amazing works of art including customised motorcycles, strange vintage cars and other metal and wood sculptures.

Expect a sharing is caring environment. Nothing can be bought here, except for ice. If you need water you can trade a snack bar for a bottle of H2O. Sharing shade, sun lotion and the occasional cigarette is all part of surviving AfrikaBurn.

Have a look at an example of the amazing AfrikaBurn sculptures here.

AfrikaBurn is a Burning Man regional event, and our guiding principles are based on the Ten Principles of Burning Man, to which we have added an 11th, in 2011 – Each One Teach One – that encourages the sharing of knowledge.

These principles aren’t commandments, and they’re not rules – they’re ideals that offer guidelines to how we as a community can reinvent the world, and ourselves.

Burning Man co-founder Larry Harvey wrote the Ten Principles as guidelines for the newly-formed Regional Network, in 2004. They were crafted not as a dictate of how people should be and act, but as a reflection of the community’s ethos and culture as it had organically developed since the event’s inception.

Everyone should be able to be a part of AfrikaBurn. As an intentional community, committed to inventing the world anew, we actively pursue mechanisms to address imbalances and overcome barriers to participation, especially in light of past, current and systemic injustice.

We welcome and respect the stranger. Anyone can belong.

We are devoted to acts of gift giving. The value of a gift is unconditional. Gifting does not contemplate a return or an exchange for something of equal value.

In order to preserve the spirit of gifting, our community seeks to create social environments that are unmediated by commercial sponsorships, transactions, or advertising. We stand ready to protect our culture from such exploitation. We resist the substitution of consumption for participatory experience.

AfrikaBurn encourages the individual to discover, exercise and rely on his or her inner resources.

Radical self-expression arises from the unique gifts of the individual. No one other than the individual or a collaborating group can determine its content. It is offered as a gift to others. In this spirit, the giver should respect the rights and liberties of the recipient.

Our community values creative cooperation and collaboration. We strive to produce, promote and protect social networks, public spaces, works of art, and methods of communication that support such interaction.

Our community respects the environment. We are committed to leaving no physical trace of our activities wherever we gather. We clean up after ourselves and endeavor, whenever possible, to leave such places in a better state than when we found them.

Immediate experience is, in many ways, the most important value in our culture. We seek to overcome barriers that stand between us and a recognition of our inner selves, the reality of those around us, participation in society, and contact with a natural world exceeding human powers. No idea can substitute for this experience.

As a self-reliant community, we believe the responsibility of spreading our culture lies with each and every one of us. All of us are custodians of our culture – when the opportunity presents itself, we pass knowledge on. 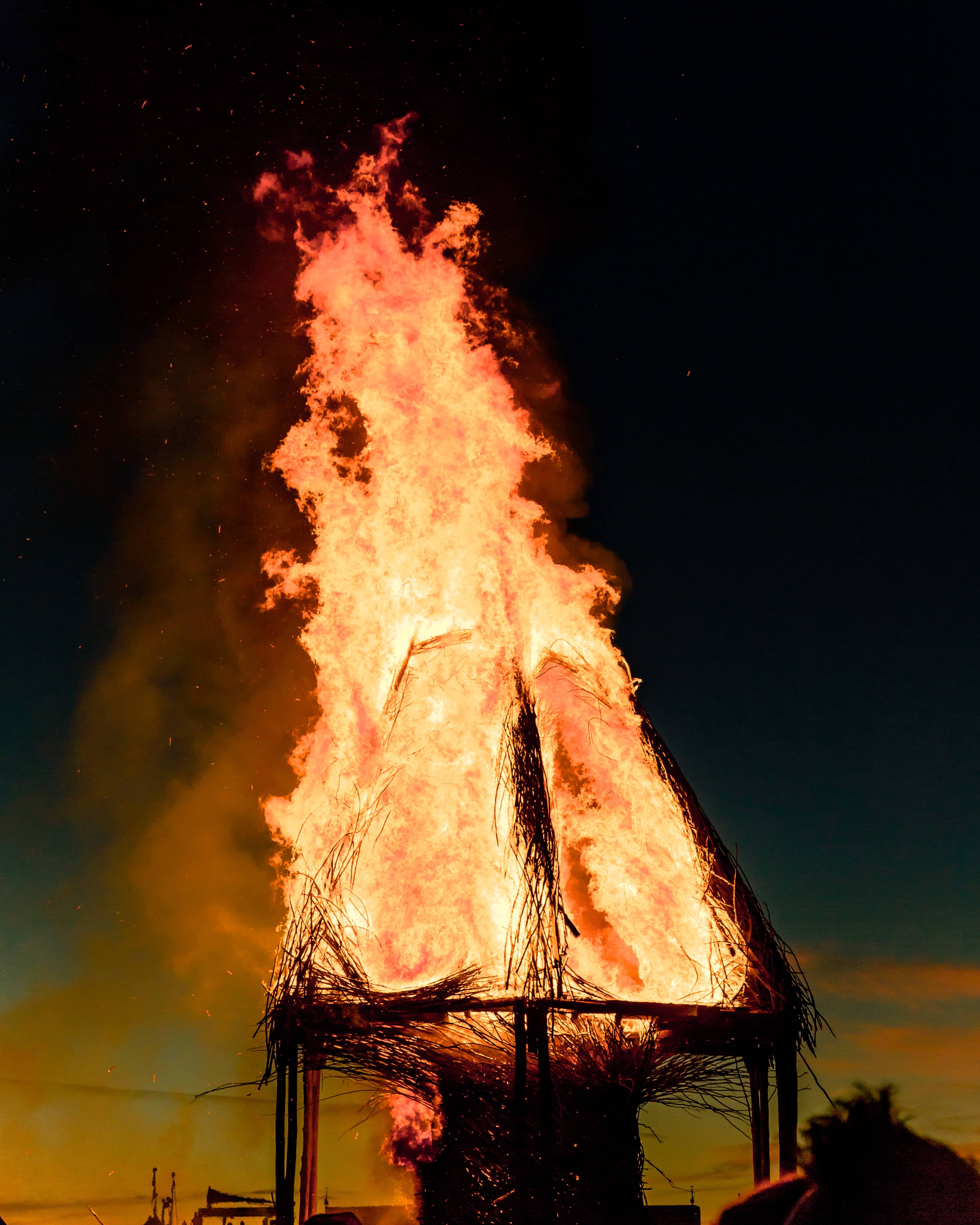 The AfrikaBurn organisers pride themselves on running a volunteer-based festival, with special sponsors and partners. In order to be welcomed back into the Tankwa National Park each year, it’s every festival goers’ responsibility to clean up after themselves. Keeping the environment clean and undisturbed.

The organisers urge everyone to participate in their de-commodified festival that has a gift economy. It’s also a non-commercial space so if you see this as an opportunity to promote your business, you’re going to the wrong place.

The whole AfrikaBurn festival ground is car-free (unless it’s an art car), only bicycles and pedestrians are allowed to drive around while cars should stay parked. There’s a speed limit of 10km/h.

Camping is permitted but only in a designated camping area and is in true style, a first-come-first-serve basis.

Huge fires are lit at night and therefore there are restrictions on amount of fuel that can be kept in camping areas. Fire precautions like sand buckets and fire extinguishers should be brought from home. No open fires should be left unattended. AfrikaBurn dates for 2020 are Monday 27 April to Sunday 3 May. If you want to go though, you need to get your Afrikaburn tickets ASAP. See below for advice on getting them.

What do you eat at AfrikaBurn?

You’re responsible for your own food at Afrikaburn, as food can not be bought. Avoid bringing perishables especially if your planning on staying for the whole duration of the festival.

Don’t forget water, and lots of it. The advised amount is 5 litres per person, per day. It’s up to you to take your own booze to AfrikaBurn. Luckily there are ice stalls and you can keep your drinks cold with it. It’s a festival so people like to drink and be merry. Expect to find many festival goers sitting on blankets next to a fire drinking brandy, vodka, beer and whisky.

Feel free to trade a beer or cider for a whisky with a friendly neighbour, it’s all part of the experience.

The AfrikaBurn music scene is open to all genres. Music is made by volunteers and festival goers themselves. Seems like a strange concept, but it really works. There are no big headliners at AfrikaBurn.

Musicians need to register with festival organisers and then they’re free to bring equipment as they see fit. Musicians join a theme camp, they can share instruments, the mic and they create the show.

Music is made in the moment. You’ll see many artists playing the acoustic guitar, harmonica, drums or musical bells, some bring their whole DJ setup – all for the sake of self-expression.

There’ll definitely be some barefoot dancing going on at night, and during the day.

As long as you don’t bring along feather boas and glitter (because they aren’t biodegradable and destroy the Tankwa environment) you can wear whatever you want to AfrikaBurn.

Whether it’s a golden speedo or fishnets and neon wigs – anything goes at the AfrikaBurn festival. This is a time you can let go and dress to express.

Some festival goers create real artistic costumes, some resembles lizards while others dress up like… party wolfs. There’s no ‘standard’ for an AfrikaBurn outfit.

Remember it’s hot during the day, extremely dusty and it can get a bit chilly during the mornings. Desert weather can be unpredictable so pack for all occasions.

What to pack for AfrikaBurn? Your packing list for Afrikaburn should be pretty extensive. You’re literally in the desert, with all the challenges that brings.

– Ticket and ID – no one is allowed without a ticket.

– When parking in Tankwa Town, you need a Vehicle Pass. One per vehicle. Make sure you get one in advance

– Umbrellas, sunhats and anything that provides shade from the sun

– Medical kit (there are medics available on the premises)

– Wet wipes or anything else to clean yourself with

– Bicycle and a spare wheel or pump

That’s the basics you’ll need to pack for AfrikaBurn – take a look at this list of everything you could possibly need for a festival to decide what else you need to bring.

AfrikaBurn has an unconventional way of camping. You can literally sleep under the night sky if you wish – just you. Putting down a stretcher, pillow and sleeping bag is a great alternative to setting up a full tent with mattresses and built-in fans.

RVs and caravans are also welcome.

Portable toilets can be found near campsites, but there are no showers at Afrikaburn. If you want to clean up you need to bring your own portable camping shower or give yourself a quick rinse with water.

How much does AfrikaBurn cost? General tickets that include early bird prices start from $120. Mayday tickets or last-minute tickets are $200. Festival goers that volunteers or run camps have subsidised prices on tickets and can pay as less as $40. This is one way to encourage participation by providing a creative setup or service.

Apart from your ticket price. Considering food, booze, water, camping gear and transport you can go on a generous budget of $400 or a tight budget of $150.

How do you get AfrikaBurn tickets?

Only 13,000 Afrikaburn tickets are sold. Cheaper general sale tickets start selling in September-April and Mayday Tickets from August to May.

Tickets can only be bought through the AfrikaBurn website and are non-refundable.

Top 5 tips for anyone going to AfrikaBurn for the first time?

2. An open mind and a free spirit. Taking part in the AfrikaBurn’s unique eco-friendly, no advertising, no sales and no showers way of doing things, demands a positive energy.

3. Participate and get involved. The best way to enjoy AfrikaBurn is by getting involved. Even if it’s just painting people’s faces, exhibiting some of your artwork or picking up trash. Sharing and immersing yourself in the new lifestyle of the temporary city is what it’s all about.

4. Be prepared! This is not a joy ride, it’s survival of the fittest in really hard conditions. But if you are prepared you will be able to enjoy every single moment of it.

5. Forget about clean shoes, clothes, face, feet and sleeping area. You are going to get dirt all over. Embrace the sweat, embrace the dirt and love every stinking moment of discomfort.

Needless to say, Afrikaburn is for serious festival goers. First timers should come prepared. Once you attended (and survived) an AfrikaBurn festival, you can proudly call yourself an expert. But until then, soak up my advice! Stuffing my face at the Knysna Oyster Festival