When you feel like you can SOS call your Mantova hotel host from the supermarket down the road, you know you’ve got a good ‘un.

My friend Chloe and I had decided to stay at the Beatilla Farm Resort in Mantova, Italy, after our adventures at the Bardolino Wine Festival. It seemed like the perfect break with its eco, arty, rural vibe. We didn’t really know what to expect but with some good cycling on the agenda and a possibility of yoga, it had to be some sort of a winner. 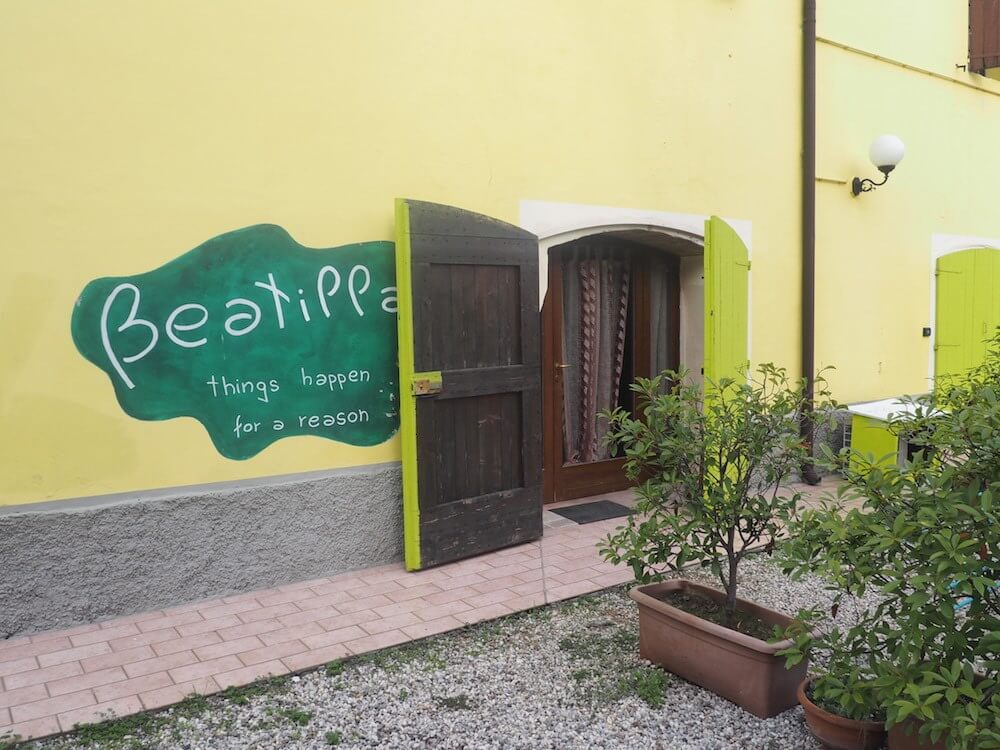 – Loved this mantra that welcomed us on arrival

Google Maps told us we could walk the final ten minutes, in between the bus dropping us off near the supermarket and the actual location. But Google Maps lied. It was a motorway and so the SOS call began.

Good old Luca, came to pick us up.

The owners, Luca and Bea – I think you can tell they’re related!

He’s the visionary and artist behind Beatilla and she’s the support to see it through. Luca Bornoffi’s art has been shown in galleries in LA, Rome, St Barths and Spain, and is displayed all over the walls at Beatilla.

He made his name with his famous Salami Chair and since then has received commissions from around the world. True story, we witnessed him packaging some of his canvases off to send to LA. Fancy. Luca is big on his upcycling. The floor of his restaurant comes from the old beams from the farm, and is filled with old radios for decoration. Desks are made from doors and he reuses everything on the farm to create sculptures and artwork in his studio.

He’s a mad surfer too. His friends will just phone on a good surf day and off he goes to join them. Not that running Beatilla is easy, he has 12 rooms and two apartments to care for along with his sister Bea. I asked him about the name ‘Beatilla’. Apparently in their school days a friend had called Bea ‘Beatilla’ and the sound of the name had always stuck with him, the naming of the resort was the perfect opportunity to use it.

On our last night we met their dad, although Luca didn’t tell us who it was and we just thought it was some old dude who came to talk us. I had a great conversation with him through Google Translate – he seemed to find my ripped jeans funny, I wanted to know if he wanted any of our wine, then for some reason the last translation was ‘is it dangerous?’ but we can’t remember why.

He showed me photos of him pulling pints behind the bar at a local osteria that night and acted like it was just another night out in his life.

There is actually a photo of Chloe sitting on his lap somewhere, neither of us are quite sure why but I think it’s best it stays in the private collection and we look at these flowers instead. – When we surfaced the next day he’d bought these beautiful flowers from the field. 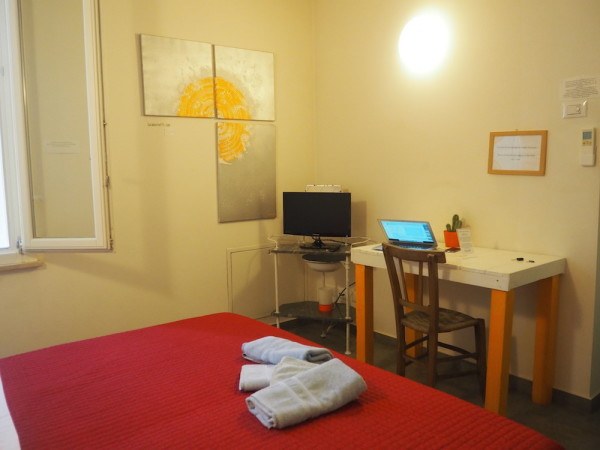 – Spot the bottle of limoncello!

Our room was perfect. Slick, clean and spacious but still with personality and the rustic quality they want to keep in the farm design. We had a double bed, shelves, a kettle, space for the bags and a desk – the Wi-Fi was great too. There was a TV too but we had no time for that. – Cake for breakfast? Why not? (Said Chloe)

As confirmed by Chloe, the breakfast here was one of the best from a hotel ever. It was a simple choice; clean and homemade with quality ingredients. We’re both big yogurt aficionados and the thick creaminess of their offering was spot on. I had it every day, with banana and muesli. And for second breakfast I rotated between toast and Nutella, muffins baked that morning, and the array of jams with a bit more yogurt. Made my own corner yogurts didn’t I?!

There is a pretty sweet looking restaurant on site, which when we were there was only open on lunch times and weekends. Unfortunately there was an event on on the Friday so I didn’t get chance to try it, and we left early Saturday morning. All the more reason to go back.

– Fresh as the day it dropped, which was that morning

And this one time, Luca gave us a pomegranate each that had fallen from the tree right there. So tasty. The Tesco jobbies I’m used to are ruined forever. – Super speedy me, look at her lagging behind…

Mantova was only a 30-minute cycle ride away, through the fields and along a bike path. Luca and Bea had loads of bikes to choose from – I went for an old skool fixie. We cycled to Mantova on two out of the three days and both decided it was one of the coolest cities we’d been to. There was history, there was art, cool cafes, boutique shops, bridges, architecture, parks and plenty of space to sit outside and admire the Italians passing by.

Just be careful of the Negronis. Especially if you have three back to back. – Proper Juliet innit, she’s already got her Romeo though #married

The Beatilla Farm Resort is also only 45 minutes on the train from Verona where you can find more character, more cool shops, more delicious Italian fare and Juliet’s balcony too. We went for the day by train and had a brilliant time eating pizza and drinking Prosecco in the October sun. Lake Garda is only 50 minutes away on the road, Venice an hour and a half and Milan 2 hours and 15 minutes. Brilliant.

Luca and Bea have got the whole ‘eco, rural, rustic, arty hotel’ thing down to a tee. We stayed for three nights had some good sleeps, great breakfasts, fun trips out, excellent service and made two new friends.

READ MORE: Where to Spend a Weekend in Italy

Book into Beatilla, get a rental car and go explore!

We were invited to stay at Beatilla Farm Resort by Luca in return for my thoughts, in a nutshell I’d go back and pay full whack, no doubt about it.

What a crazy cool place to stay! I'll keep it in mind when I'm in parts of Italy this summer. Also I love your blog for obvious reasons, but sometimes you say thing I have no idea the meaning, like: "The Tesco jobbies I'm used to..." And I laugh and enjoy not knowing what you are referring to. Cheers,

Me too – especially when it's fresh off the tree!