I thought I’d join the 2.36 million tourists who go to the Isle of Wight every year and hop on over.

The Isle of Wight is actually only a few miles (4ish), as the crow flies, from my home. On a clear day I can see it from the classes studio at my gym. 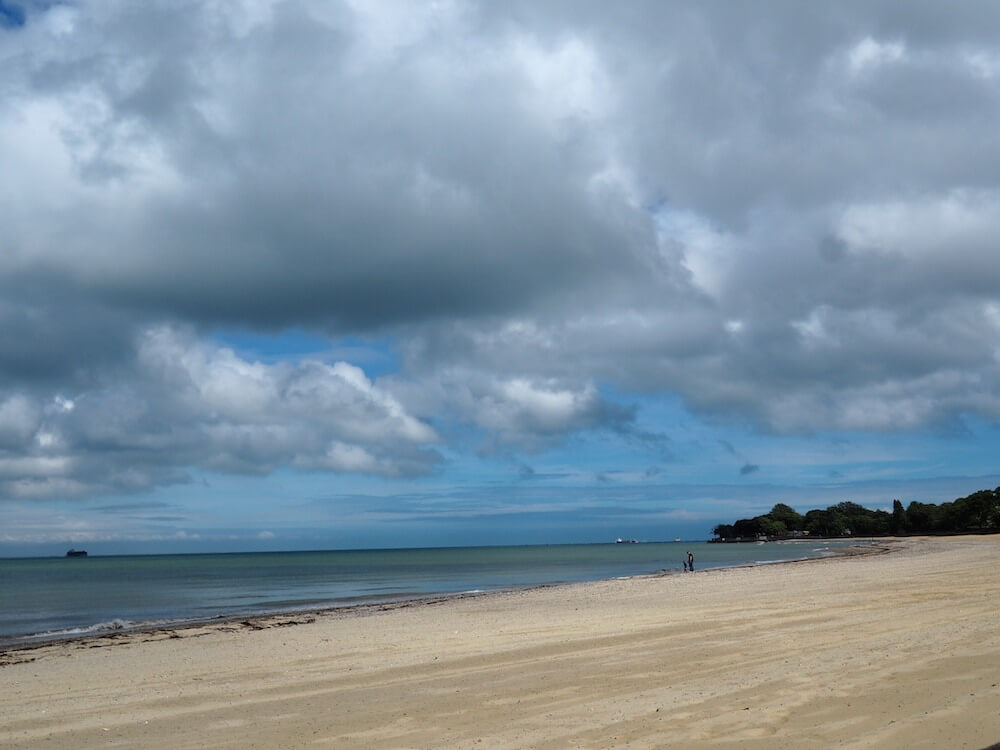 I’ve been before, twice, but just to go to Bestival Festival. Straight to Robin Hill Country Park as soon as my feet touched land. This time though, the lovely people at Discover Ferries, Red Funnel, Wightlink and Visit Isle of Wight planned a day for us at Osborne House – where Queen Victoria lived and died – the Steam Railway, and then a quick look at the beaches (Caribbean or Isle of Wight?) before a trip home on the WightLink.

We arrived in style via the Red Funnel’s new executive Signature Lounge on board the ferry. Complimentary croissants, coffee, fast Wi-Fi and the best views of the… rain..

My Day on the Isle of Wight 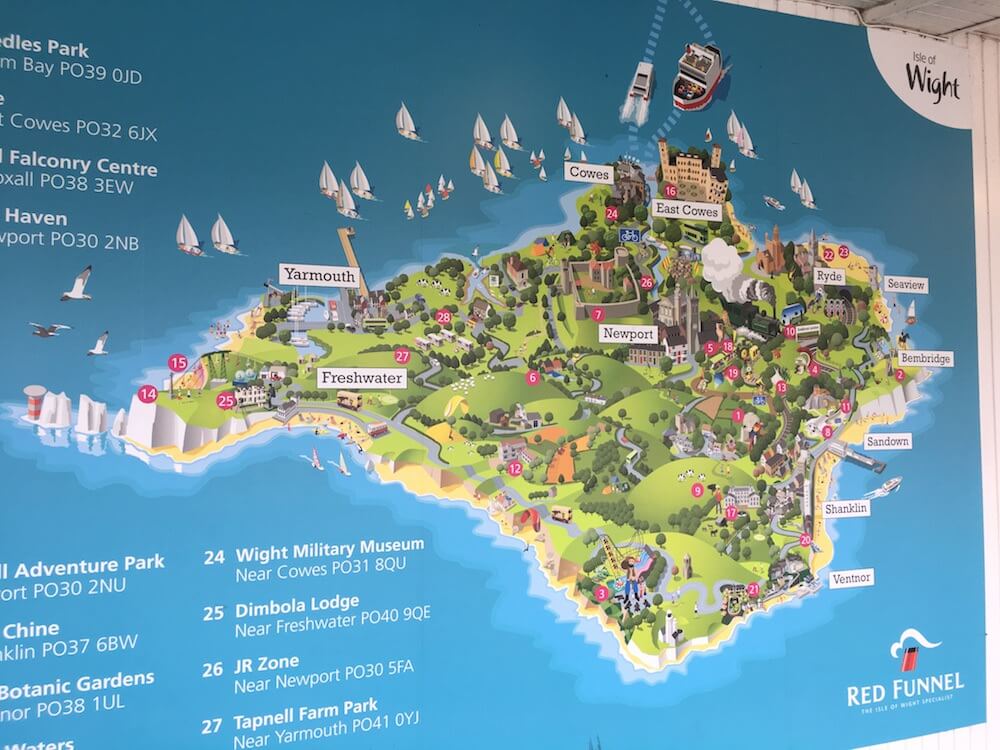 The more I heard about Queen Victoria the more I liked her. Her unwillingness to accept the patriarchy, her love of food and her passion for partying – I mean, what a woman.

She used Osborne House as a home for over 50 years, and today many of the rooms have been recreated as they were, even using the original furniture. 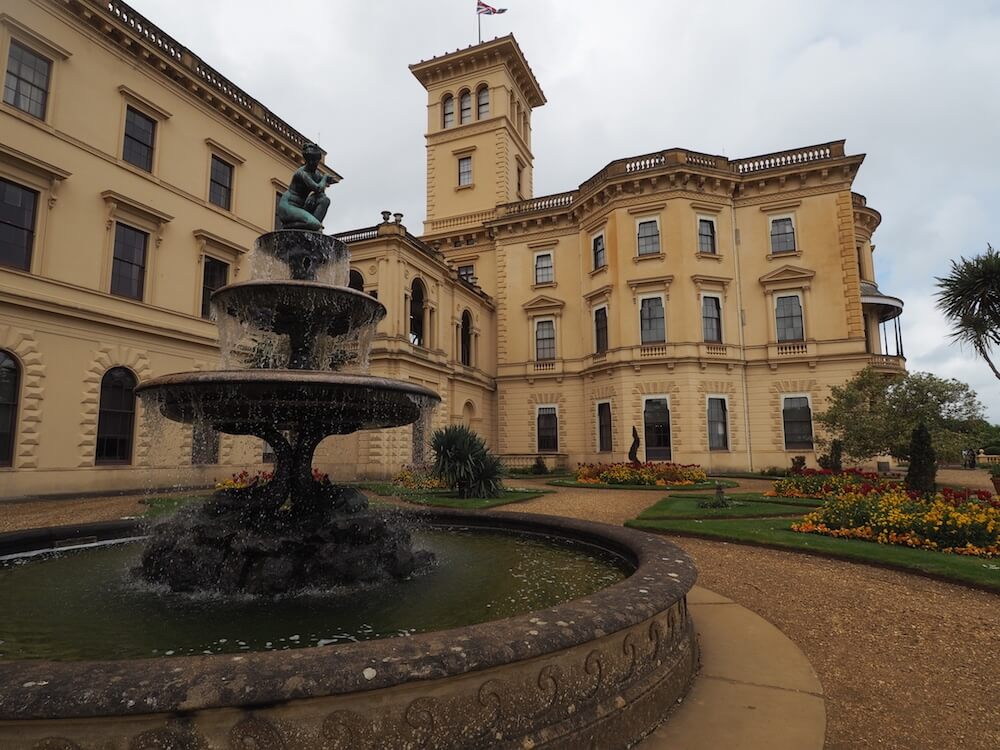 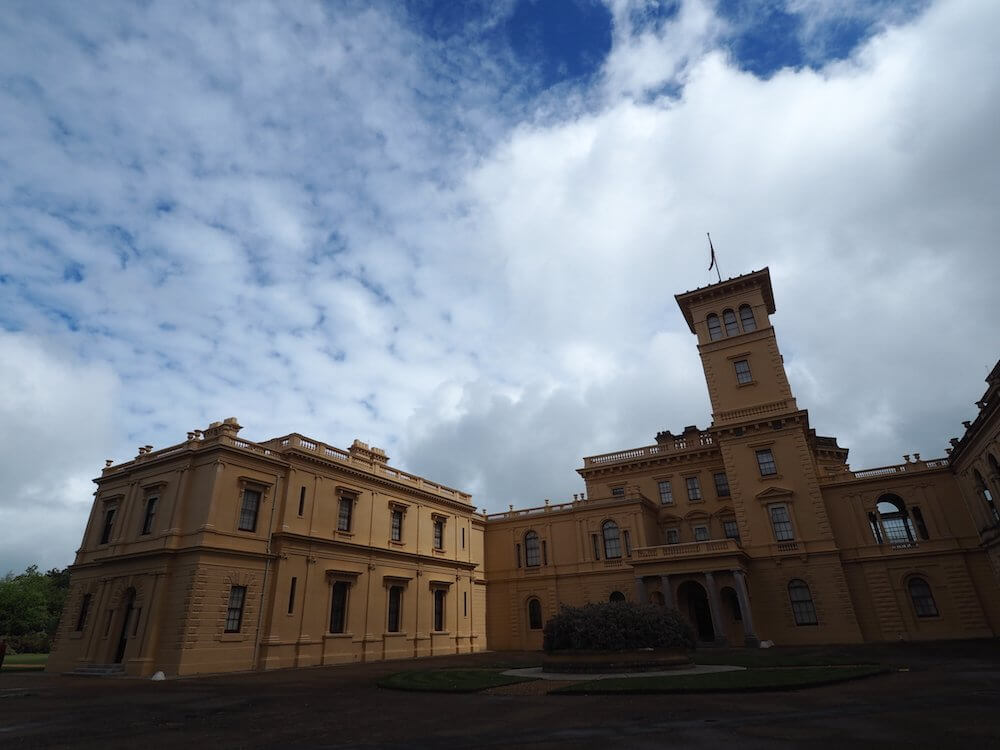 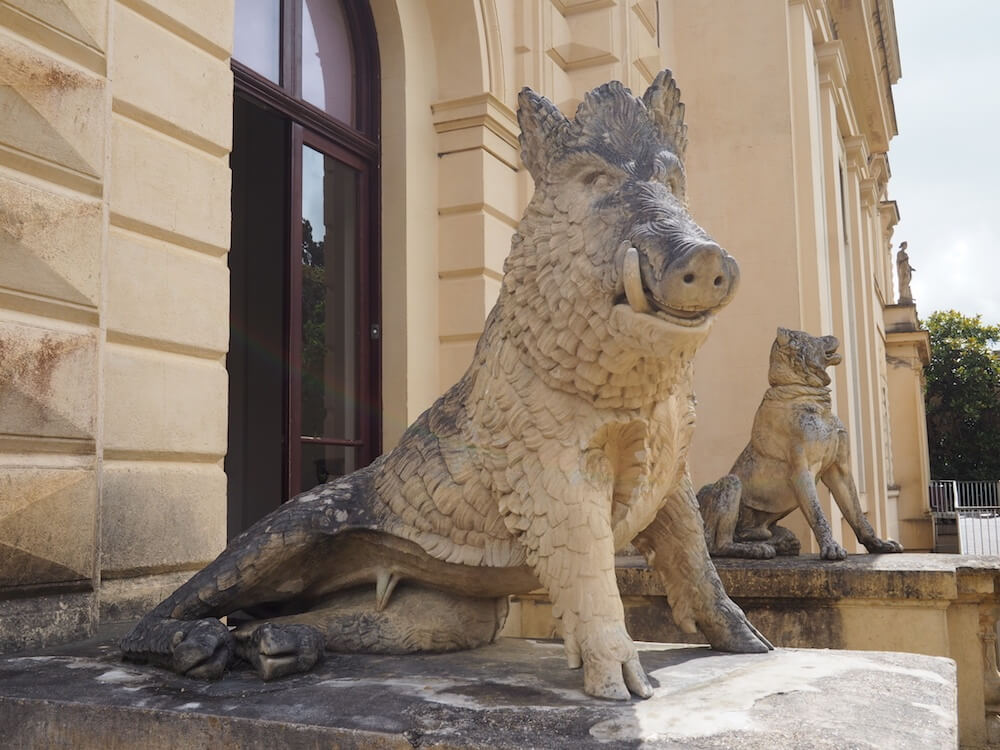 I’d definitely recommend doing a guided tour round Osborne House to learn more, and to understand what you’re actually looking at. You need to get there this summer though because in September the house is going to feature in a new film with Judi Dench, Victoria and Abdul, and so interest will be on the up. Go now. 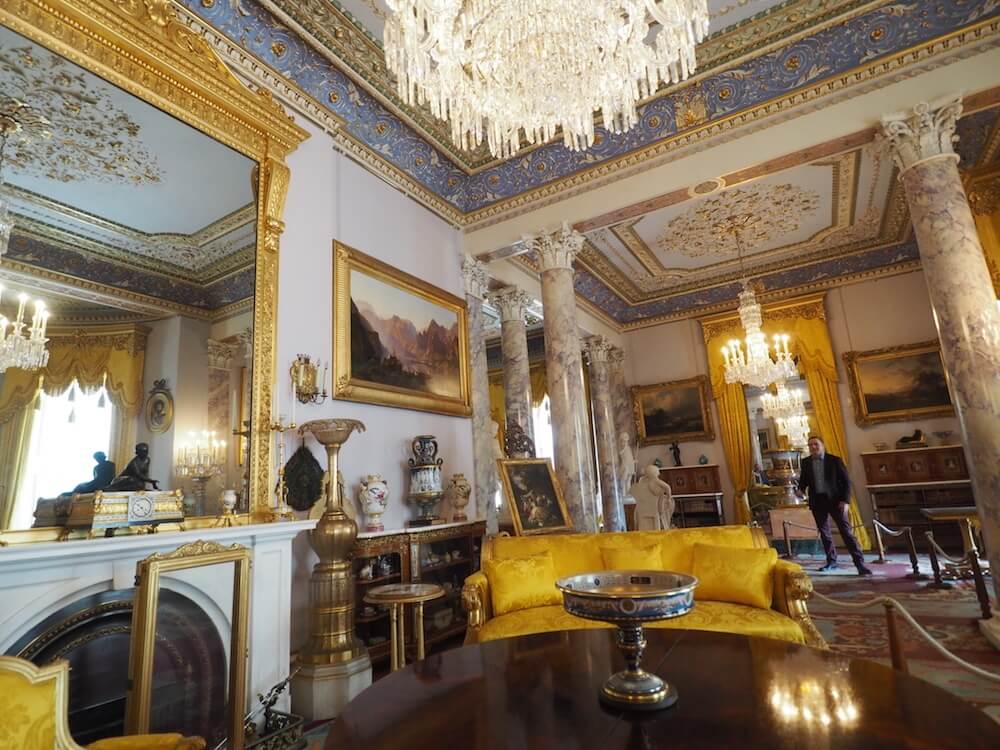 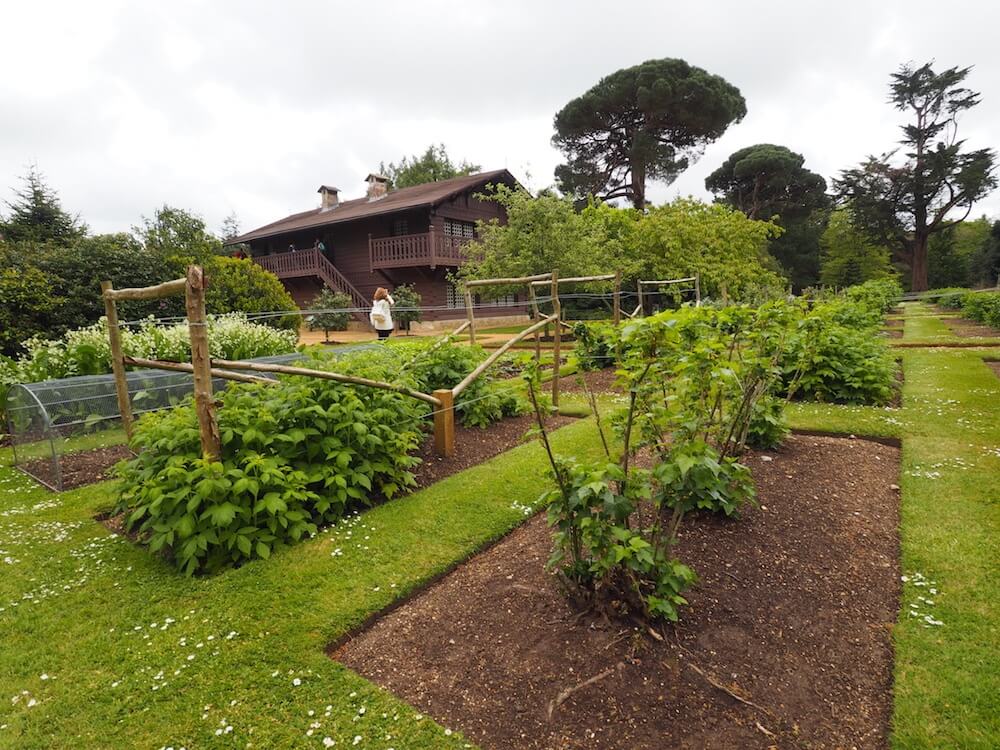 The house is open to the public from April to September. We saw the Swiss Cottage area – the kids house – which is bigger than where I live now – and we just missed seeing the beach thanks to having too much fun in the shop with the local wines, but next time. 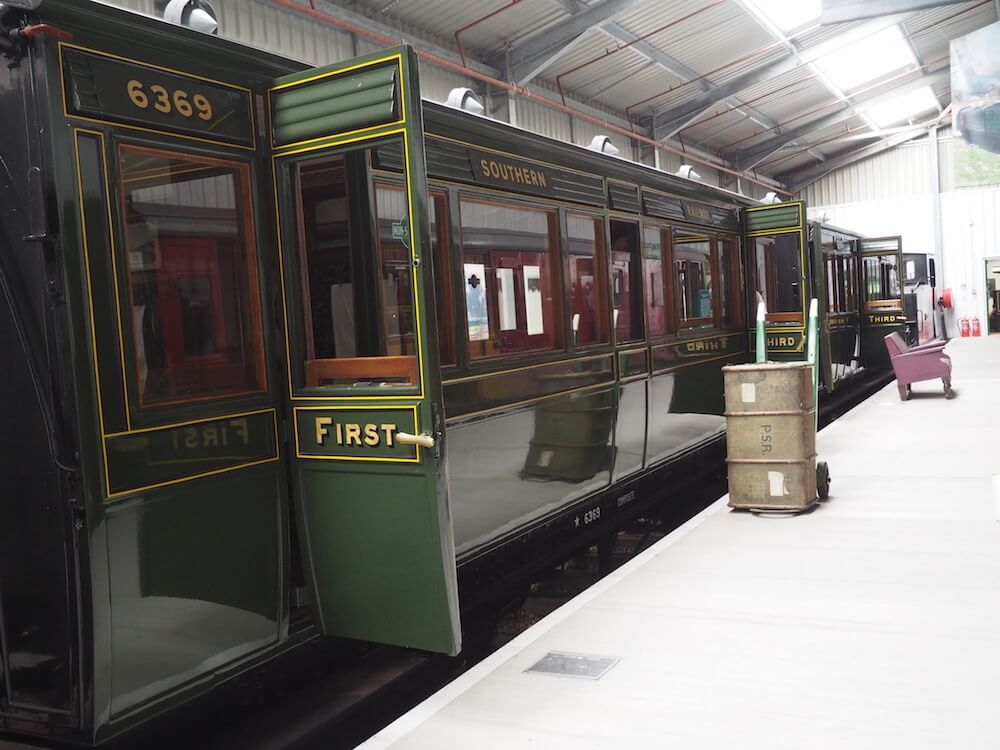 After lunch we went to see the Isle of Wight Steam Railway on a day that it wasn’t running. Oops. Still interesting to see though.

When I was a kid we used to go and see a steam railway once a year, the Santa’s Special. We’d ride it to see Santa at Severn Valley Railway, get a present, and then come back again. Massive treat, loved it. So I think I have a little soft spot for railways from that. 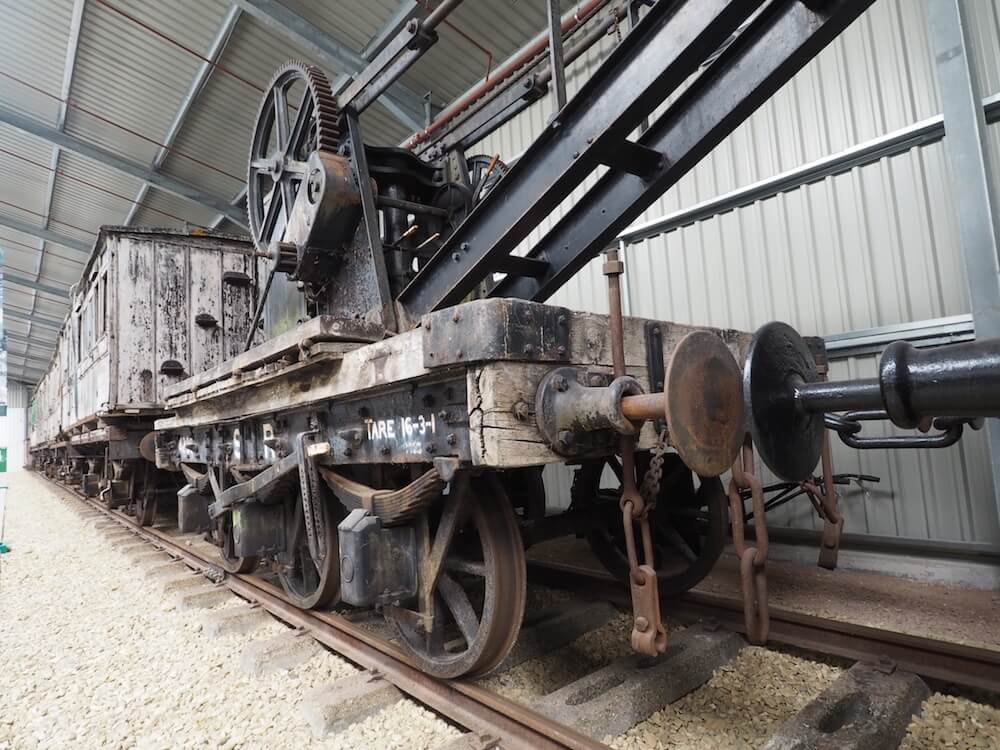 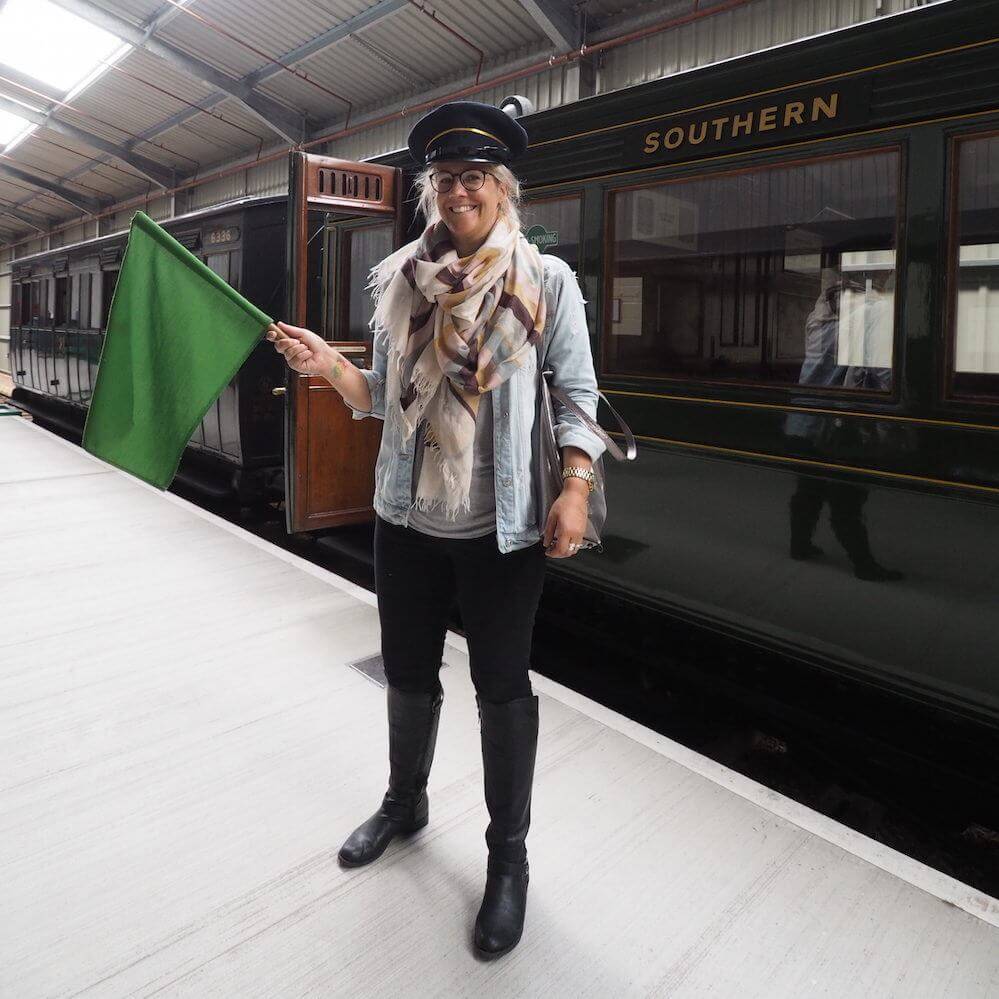 There was an old exhibition of carriages, a little video explaining how the railway on the Isle of Wight started and the chance to walk through the workshop to see the team repairing old carriages. Genuinely interesting, even if you think you don’t like trains.

And always good for the photo ops anyway – especially when there’s a dressing up box. We only had time for a quick look at the beaches on the Isle of Wight. I’d been told they looked like the ones in the Caribbean, and having just come back from Antigua I was a little dubious. But… maybe… if you squint your eyes and on a sunnier day?

What else is there to do on the Isle of Wight?

See dinosaurs: you can actually see the dinosaur footprint fossils fall out of the cliffs.

Eat: they’re very hot on farm to table and using local products. Wightlink very kindly gave me a big hamper of the Isle of Wight products they sell on board, so far the biscuits and cookies have been scoffed by me and my housmates, and I’m working my way through the garlic and oil.

The garlic farm: the Isle of Wight is famous for their garlic production.

The alpaca farm: you can ride alpacas!

Getting to the Isle of Wight, and back 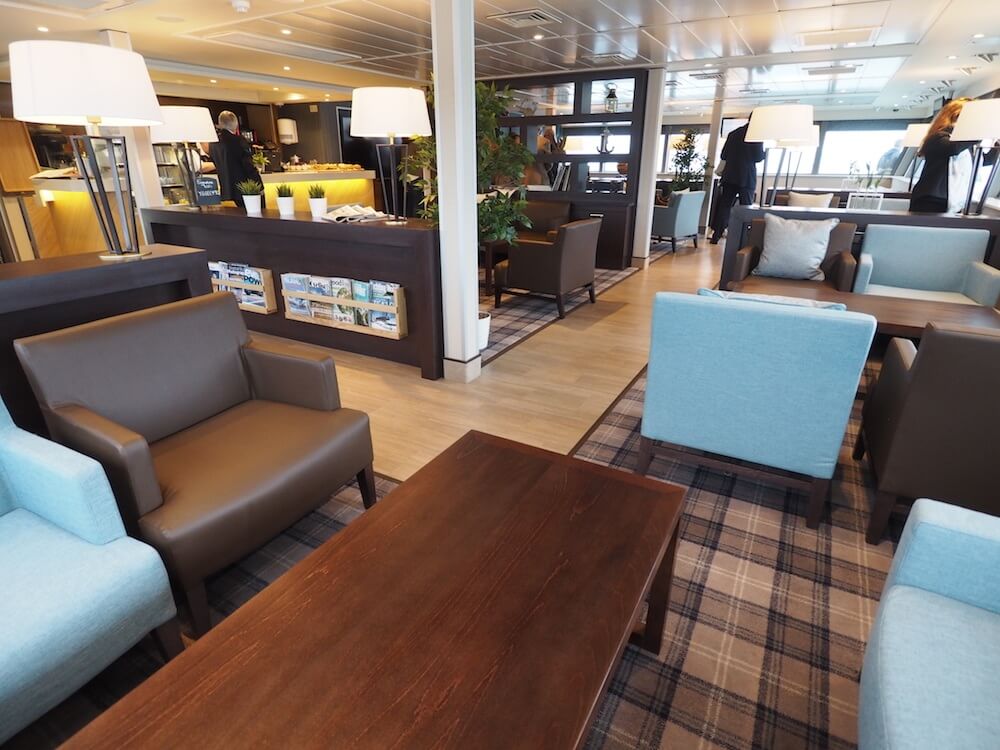 We went by Red Funnel, in the fancy new Signature Lounge. The rest of the ferry was perfectly good though, not really any need to upgrade unless you need to the Wi-Fi or for a special occasion. You can bring unlimited luggage on the Red Funnel, there are food facilities on board and the chairs are comfy too. You can come as a foot passenger, or with the car – whatever suits. The crossing from Southampton to East Cowes on the Isle of Wight takes an hour. Unfortunately it was chucking it down with rain when we came into East Cowes. Not good for the pics, but you get the idea. On the way back we travelled with Wightlink. Again, views, relaxing seats, and a great interior, as well as plenty of space in the exterior for the views. We travelled from Fishbourne to Portsmouth for 45 minutes. 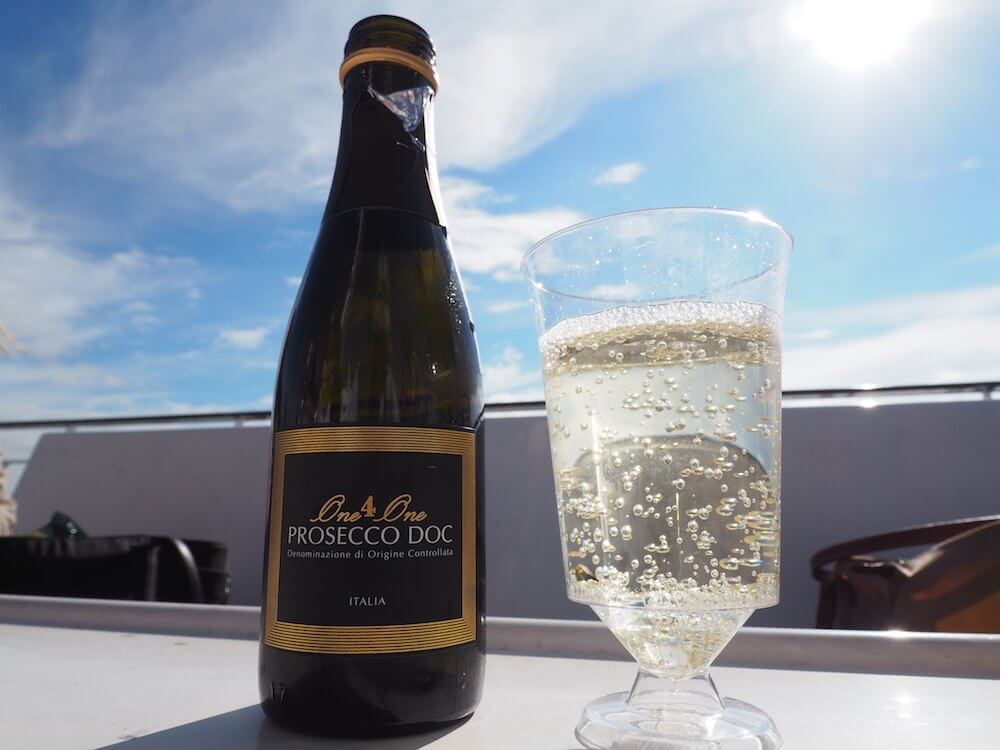 It was glorious sunshine by this point so we sat out on deck with a glass of Prosecco, until the captain invited us into his cabin to see the arrival as he does. Loved it in there, with panoramic views of Portsmouth coming into sight under the sun. A Day on the Isle of Wight

A day on the Isle of Wight is totally achievable for me, seeing as I can jump on the Wightlink in Portsmouth. I can guarantee I’ll be back again soon. Well, I will be. Isle of Wight Festival in June!

There’s so much to do there though that if you can I’d recommend staying longer. Even Osborne House could take a day if you factor in lunch and dinner somewhere too.

I want to explore the dinosaur history, see more of the beaches, go to the alpaca farm and do a little adventure sports too. I’d also love to go back on more of a foodie trip to try the locally made goodies, as there is a strong movement here to only use Isle of Wight ingredients. Love all that stuff!

Ever been to the Isle of Wight? Tempted?

The trip was organised by Discover Ferries, the industry body for the UK ferry industry, as part of its National Ferry Fortnight (6 – 20 May 2017). Now in its ninth year, National Ferry Fortnight showcases Britain’s 75 ferry routes and the benefits of travel by sea. The trip was generously supported by Red Funnel, Wightlink, Visit Isle of Wight, Osborne House and the Isle of Wight Steam Railway.

58 Brilliant Things to Do on the Isle of Wight | VickyFlipFlopTravels

I've visited the Isle of Wight once, as a kid - so I can;t really remember it to be honest. Reading this and looking at the pictures tells me I need to go back as adult and appreciate it!

Yeah, I think it'd be really different. I'm like that with Devon and Cornwall, we went every year for about 10 but then I haven't been back since I was 18. Need to go and appreciate it as a grown up. I'm on the Isle of Wight again now – beautiful place!

What a place! Great. Excellent post with best writing skills. It's worth it to read. Gonna check out this place soon.

Ah you should do. I'm actually on the Isle of Wight now, again. It's such a cute island with lots for tourists to see, do and explore.

What a beautiful looking place! I've never been before so I may suggest it to Hubby tonight as we're looking for somewhere to visit in the summer holidays. I love the picture inside the train carriage, so pretty.

Ah thank you Amy. Yeah, I'd definitely recommend checking out the Isle of Wight. I'm here now, again, and off to check out Ventnor this afternoon, which is like the artsy / hippy kind of area. You can expect a post about it soon!

superb blog all travel experience is good i love it...