Oh 2017 Glastonbury – so much fun. Well, from about five hours in until Sunday morning anyway.

From the simple things like the mornings in the tent working out where to put the glitter next, to the dancing around to the headliners Foo Fighter’s like the insane 15-year-old fan that I was, it’s been an awesome week. Glastonbury, as a whole, was awesome and totally lived up to my hype, and the media hype, yet again.

There were some pretty shitty times though, here goes…

My 2017 Glastonbury Experience
from the Worst to the Best Four and a half hours of queuing to get into Glastonbury, in the heat of the hottest day in the UK, for 40 years. FOUR and HALF, with around 40kg of camping equipment, booze, food and clothes to carry each. And I was wearing wellies and jeans. The queue moved at about three steps a minute, meaning picking the stuff up that wasn’t on your back and putting it down again repeatedly, over about a mile and a half.

Any sense of ‘all part of the experience’ went out the window. Having got up at 4:30am, driven for an hour and then joined the queue, with no breakfast or water, the start of Glastonbury was horrible. Towards hour three people were just getting annoyed and pushy, others just giving up and sitting round the edge, some of them crying.

Once we were in we collapsed on the floor in relief, then walked another mile with our stuff to our campsite to put up our tent. Finally.

Need some help getting your Glastonbury tickets in the first place?

Worst I wasn’t going to tell you about

I think I got bacterial gastroenteritis, well that’s what I diagnosed myself with from a Google search anyway. Sunday I woke up, and all my muscles hurt, which was fine considering the walking and dancing, and then my stomach started cramping. Cramps like I’ve never had before, ever, ever. I thought I was going to be sick it hurt so much. I didn’t know what to do. I didn’t actually go to the festival till about 3pm and even then just had to keep lying down, fighting the pain and working out where the nearest toilet was.

I didn’t drink alcohol, or eat (bar a few salty crisps) or barely drink water for fear of making it worse. Poo problems at a festival, on the final day, are every bit horrible as they sound. Gawd those cramps – I was bent double. Didn’t stop till Tuesday morning.

I think it was a mix of the dirty festival, drinking for four days, and not having enough water at any point since arrival. I will do everything possible to not have this next time – it was horrific to be this ill at Glastonbury, and with the five-hour journey home too.

This was actually the absolute, absolute worst, but didn’t want to start with it. Bit grim innit?! All better now though! 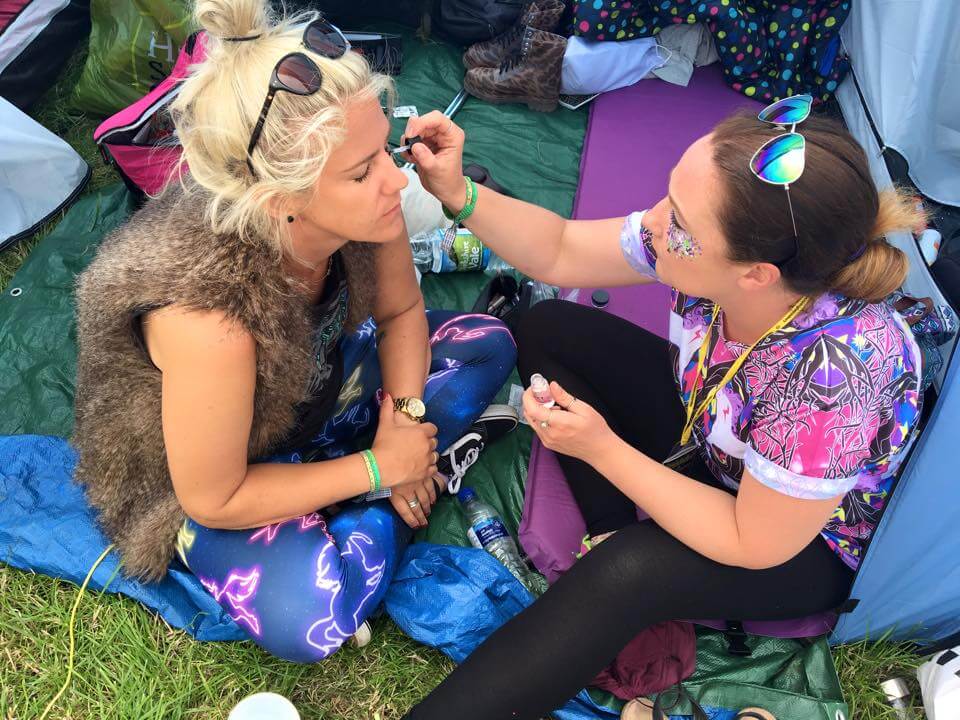 Walking home one night, at around 5am, I totally lost any sign of any friend and I went the wrong way. I could see the campsite I was at MILES in the distance. That day I’d already walked 30,000 steps according to my phone, I was cold and I was tired. The tent I’d been having a lovely time in dancing had shut up. To be fair they did all give us a cup of tea before sending us home.

Glastonbury is exhausting. The stages are far apart, the terrain all over the place and wherever you are, at 5am your tent is a mission away. I remember getting home and saying to Helen, ‘never again’. Completely dismissing the fact I’d been having an awesome time till the early hours.

Even pre bacterial gastroenteritis the toilet trips were pretty grim. Not the worst, but nowhere near the delight of my home toilet right now. Eugh, the germs! People who fail at hover pooing are the worst – a few times I’d see a mess on the seat, obviously with no attempt to clean it up. Some people need to practice their aim. Bumping into our friends Karen and Paul as soon as we arrived at the opening night fireworks in a field of thousands of people was pretty sweet. We knew they were in there somewhere, but what are the chances?

And again, a few days later after losing Helen all day, who should be getting a cider right next to me at the main stage before the Foos? Yes, Helen. In a field of tens of thousands, we found each other. WHAT ARE THE CHANCES?!

The XX were also awesome, and one of my favourite bands, so woulda loved it anyway. Who knew that Craig David would be so good?

Jen loves him so we went along and got a good spot near the front. He came on all smiles and slick white outfit telling us all how much he loved us. Pretty soon though we were into all the greats Fill Me In, Rewind and 7 Days, you know the ones. He was LOVING it up there, and his enthusiasm and what looked like disbelief that he was up there was infectious. He just made me happy ok?

He played his hits and then moved into this TS5 night he’s created, playing garage tunes and remixes of current tunes. Got the crowd going, definitely got us going – loved it!

Oh god, the Foo Fighters were amazing. We were quite far back but it meant we had space to dance around. When I was a teenager I LOVED the Foo Fighters – I remember doing some sort of project on them. I’ve seen them twice before, but this, this was just incredible. The atmosphere was crazy! Did you watch it on TV? I mean, they owned that stage, that was a proper rock show. Need to watch it again on catch up actually. So this was a few hours combined, but basically we went to Ultimate Power on the Thursday and it was so busy we stood outside dancing the tent, so we had space to dance. If you don’t know Ultimate Power, they basically play power ballads non stop. So good. We had Bonnie Tyler, Bon Jovi, all the greats. At one point they played the Dirty Dancing ‘Time of My Life’ song and we lifted Helen up between us – see pic. It was sunny, we still had all of Glastonbury to look forward to and we had a bag of wine to share. Loving life.

After that we found some benches to chill out on, after all that excitement, and a girl wearing a Lion King jumper came and sat next to us. Cue, our Lion King medley directed at her – ‘Aaaahhhhhh savenyaaaaaaa etc’. I’m pretty sure Helen even knew the Swahili bits. People were joining in around us and the girl was just sat there. Haha.

After that we ended up in some sort of massage circle as everyone was complaining about the queues the day before. It was just one long beautiful bonding experience of a day. And my favourite.

Are you planning on going to Glastonbury in 2019?

Watch me go through what to take to Glastonbury on YouTube

Top 10 Things to Do at Glastonbury Festival

I've heard a lot of scary toilet stories from people who went this year haha I can't even imagine seeing what a hover poo looks like gone wrong omg. It sounds like you saw some amazing acts though, and have made some fab memories!

Oh gawd, I saw some horrific things! Repeatedly though, wasn't even just the one time. Whoever has the job of cleaning out those toilets deserves a meddle!

Apart from that though, yep, it was great :).

OMG the long drops at Glastonbury are the thing of nightmares! And if the bloody hoverers just sat down like normal people, it would make things a hell of a lot easier for everyone. That said, It's still my favourite festival in the world. Even if there was nothing on the main stages, all the little moments like you mention. The power ballad parties and banter with total strangers is the BEST. Defo hoping to be back in 2019. Hope you're feeling better by the way, gastro ain't nice :/

It's so hard to keep the place clean with that many people. Don't really know what else they can do when I guess people will just do as they please anyway.

Yeah it was still great and just has that unique vibe over all the others. I think next time I go I'll try and avoid the main stages and just go for the random acts on the smaller ones, reckon you could have a totally different Glasto that way. But having said that, the headliners and main stagers are always so good you'd be mad to miss them. Choices choices!