An English, an Irish and an Aussie met at summer camp. They got on very well and decided they should go on Easter holiday together. The Aussie decided we should shun the sunnier climes and go to Interlaken in Switzerland. A place she’d heard only great things about. We decided to book Manchester flights seeing as I lived just up the road from the airport and could persuade my friend to drive us there. We were going to go skiing, play in the snow, go canyoning and just have an all round brilliant time.

10 days before we were due to leave I lost my job.

So I was headed to the most expensive country in the world with no money (as usual) and no job to pay back the usual credit card bill that funds all these trips.

Then on the morning we were due to fly the Aussie missed her train and so had to pay for a taxi to the airport. That was her wiped out too. The Irish had been persuaded by some other friends to go on a girlie holiday as she’d need some sun after this one.

For £10 you can watch an amazing 20-minute demonstration on how they create the incredible intricacies. And, you get to eat as much chocolate as you possibly can. Win.

Walked around the town

Interlaken is absolutely beautiful. Even through the cold and the rain we could see what a scenic place it was. We spent a lot of time walking around and taking photos of the Eiger, Mönch and Jungfrau mountains that surrounded us and the stunning lakes too*.

Please don’t tell mum, but we rode the Jungfrau train without a ticket. It was amazing and we got pretty high up the mountain before we saw a ticket inspector and got off. We found a mountain bar where we had a warming whisky before we realised we night was setting in. We managed to get to the bottom for free, and then realised it should’ve cost us around £50. Ooops. Don’t try this at home. 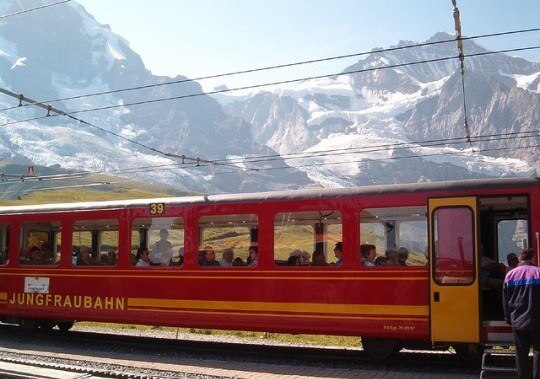 Admired the tat in the souvenir shops

You can buy anything you can imagine with the Swiss flag emblazoned on it in the shops in Interlaken. Chocolate in every shape and form is also popular, or of course, a Swiss Army Knife. We whiled away the hours admiring single every piece of it.

Sat at the hostel eating Toblerones

They were cheap at Balmers reception and I’d discovered the fruit and nut one for the first time. We spent a good amount of our 5-day holiday sitting around at the hostel and chatting to anyone who passed. We also had a Swiss fondue which was  quite disturbing after the amount of chocolate we’d eaten.

Whipped out the credit card

The saddest thing about my trip was that I’d actually had snowboarding lessons in preparation. I was so excited to try out all the winter sports but Interlaken was in between seasons so none of the summer activities were available – we couldn’t even hire a bike – and the winter ones were just too expensive for us.

The one thing we did treat ourselves to was hang gliding over the Alps, if that’s not worth getting in unescapable debt for then I don’t know what is… *Unfortunately my laptop was stolen which had the photos from Interlaken on – had to use Flickr so thanks Smaku and Megatick.

You've Got Your Glastonbury Tickets: What Now?
← Previous
I’ve Been Thinking About How Much I Love New York City
Next →
Click here to cancel reply.

I've never heard of this chocolate shop with all you can eat chocolate?! I must go! My Dad lives in Swiss so I've been hundreds of times, and for a free day out we will make a picnic and drive on different mountain passes. It's incredible to see such iconic Swiss scenery and magnificent mountains, plus there's always somewhere snowy even in the height of summer, so you can have a snowball fight in tshirt and shorts :)

There's loads of free stuff to do around the country, like Emmental and Gruyere cheese factories/museums, the Luzern transport museum, plus loads of historic bridges and monuments x

Ha-ha... you have reminded me my old days! I have also faced this situation in Zurich when I didn't have money and came back home with so many tricks and some helps.

This a great article, with so many students that go to Interlaken and don't realize how stinking expensive it is. Love the tips and honesty :)

Must say I got myself into a similar situation once! I was with a friend I'd met on the road and even though I love her to bits, she had quite a bigger travel budget than me. She jumped out of a plane while I sat in front of the fire at Funny Farm (terrible hostel btw, should have gone to Balmers) and stared outside at the pouring rain. Not the best place when you're on a budget!

Definitely not. I can't look at Toblerones now without remembering us sitting around in Switzerland debating what to do with our non-existant money. Maybe I need to go again to erase the memory...

Haha, hiya mum! You'd do the same in my situation I'm sure :)