My Tour From Zanzibar to Nairobi On June 15th I’m flying out for my Zanzibar to Nairobi tour with G Adventures. Super, super excited, although a little nervous at the same time too. I haven’t been travelling by myself since I went to Australia for two months in 2008 and so this will definitely be good for me. I fly to Dar es Salaam and stay there for the night, then get the ferry over to Zanzibar in the morning. I decided that I wanted to see more of Zanzibar than what is on my tour – which starts on the 19th – so I’m booked into Crazy Mzungo’s Flashpackers in Paje. It’s on the east side of the island and is apparently great for watersports.

Really looking forward to chilling on the beach and enjoying the cocktails made by the resident barman. Just look at that blue sea, arr yes.

Saturday to Monday will be spent chilling out on the beach.

On Tuesday I’m going to help for the day at Zanzibits in Stone Town. It’s a film and multimedia school and I’m going to go and talk for a bit on travel blogging and social media. I’m also going to see if there’s anything I can do to help with the site. Really excited about this opportunity and that I’ve managed to fit a bit of volunteering in.

“Zanzibits Center for Film & Multimedia aims to bridge the digital gap between the Tanzanian community and the rest of the world.”

Then on Tuesday night, the Zanzibar to Nairobi G Adventures tour begins!

Meet my new friends at a hotel in the early evening for a meeting. Then go out as a team to investigate the cobbled streets of Stone Town. G Adventures suggest I get lost, wander alleys, drink coffee and buy sweetmeats.

“Zanzibar Island, ‘the spice island,’ has an extremely interesting history and culture as it was the centre of the slave and spice trade in the 1800s. Zanzibar is one of the most fascinating places in East Africa, despite a heavy increase in tourism since the early 1990s. Thanks to an ambitious and far-reaching preservation programme funded by UNESCO and the Aga Khan, many famous old buildings have been restored, or are in the process of being renovated,” so they say.

Be ready to head north for 4 hours to Nungwi for 2 days and nights. After the past 5 days of relaxing I can looking forward to relaxing on the idyllic white-sandy beaches, enjoy a diving and snorkelling excursion and wander through Nungwi village.

We’ll also visit the spice plantations for 2 hours, which caused the beginnings of Zanzibar’s infamous slave trade in the 1840s.

More chilling out in Nungwi. Might need to relax a bit more.

We’ll travel 2 hours back to Stone Town for the final night in Zanzibar. Hang out in Stone Town for a bit longer and soak up the cool atmosphere with my new friends.

Now things start getting heavy: travelling time = 9 hours today. We head to Korogwe via ferry back to Dar and on the road. We travel 309km to the Motel White Parrot campsite. Here there are amazing views of the Usambara Mountain slopes and we can enjoy them from the comfort of camp.

Travel 7/8 hours and 250km past Mt Kilimanjaro to Arusha at the foot of Mount Meru, Africa’s fifth highest mountain. In Arusha I can enjoy the craft markets and “absorb the mix of cultures”.

Arusha is a safari capital and has many protected national parks, reserves, and mountains nearby.

“Arusha officially became a city on the 1st of July 2006. The primary industry of the region is agriculture with large vegetable producers sending high-quality produce to Europe. The city and its environs are also spotted with large coffee plantations, adding to the area’s charm. Though in recent years, due to the coffee crisis, many local farmers have been badly hit, and now subsistence farming is the most common source of livelihood.”

Travel 320 km and 8 hrs into the Serengeti National Park after breakfast. We’ll travel in specialised 4WD 7-seater safari vehicles which will allow us to manoeuvre to get the best sightings of the Big 5.

“The Serengeti is to Tanzania what the Masai Mara Game Reserve is to Kenya, though with an area of 14,763 sq km, it is actually over 7 times as large! The area where you will be staying and game viewing is in the central Serengeti ‘Seronera’ area, which lies in the southeast of the National Park. Because of the sheer size of the National Park other areas will not be accessible during your stay.” 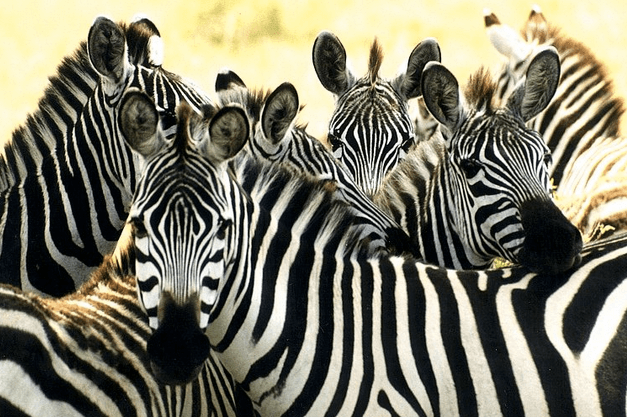 I can't believe I might actually get to see these guys!

Today we’ll travel 160 km and 5 hrs through the Ngorongoro Conservation Area and the Serengeti National Park. The tour guides will try their best to get us sightings of lions, leopards, buffalos, elephants and rhinos – while taking in the vastness of the Serengeti plains with a game drives through out the day.

Today we’ll travel from the Ngorongoro Crater back to Arusha. We’ll cover 200km and take 5 hours to do it – including the time spent in the crater. This is where the highest concentration of wildlife will be, including zebra, gazelle, impala, and cheetah, all bound by the crater walls.

Last day of the experience today, sad times. We’ll drive for 7 hours and 286km to pass the Namanga border from Tanzania to Kenya. The tour ends in Nairobi at the Hotel Boulevard, which costs an amazing £70 a night so I need to find somewhere else.

Cheers gardenofeden.com for the zebra piccie. I’ll have my own soon…

The Lost City of Atlantis, in Ibiza
← Previous
Just How Expensive is Oslo? 7 Things to Do in Oslo on a Budget
Next →

Hi Vicky! I've read your guest post on Zanzibar (how to travel there cheaply with kids) and I was wondering what a daily budget would be when travelling there. Do you remember how much money approximately you spent each day? I also travel on the budget (<$25) and I am planning to travel in Zanzibar soon. Thanks a lot and haappy travels!

Hi Agness, you could absolutely work to any budget. If you just chill on the beach all day – and eat local food in local bars you could definitely get by on $15. Food from markets and stalls is just so, so cheap. Find out where the locals eat and go there.

I love your site! I just completed a 35 day overland truck tour from Cape Town to Zanzibar with G Adventures! I've done three other trips with them. If you have time could you take a look at my site and give me any tips/ suggestions? Here's a funny post - http://travelspirit333.wordpress.com/2012/06/13/picking-up-bushman-in-botswana/ Thanks!!

Ah yes, that's the one that I joined at Stone Town. Most of the people had come from Cape Town. Three other trips? Jealous! I'll take a look at your site now :).

Oooooh...I can't wait to hear about this trip! I've been looking into doing East Africa with G Adventures because I don't think I'm quite ready to travel Africa solo! I did the Inca Trail with them last year and they were great! Have an amazing trip!

Thanks Nicole! A week today and I'll be flying - excited! I've heard great things about G Adventures so fingers crossed I'll have a brilliant time. I'll keep you updated :)