From 4:30am starts, to coping with previously unknown tent – or even bed – friends, and onto cleaning up after 18 others when you’re on ‘kitchen duty’, travelling in a tour group is definitely a unique way to see a country.

On my recent G Adventures tour from Zanzibar to Nairobi via the Serengeti I ‘enjoyed’ all of the above, plus a few other experiences unique to travelling in a tour group.

We were a random bunch. My new friends came from New Zealand, Costa Rica, South Africa, Germany, the USA, Canada, Holland and even a few from England. 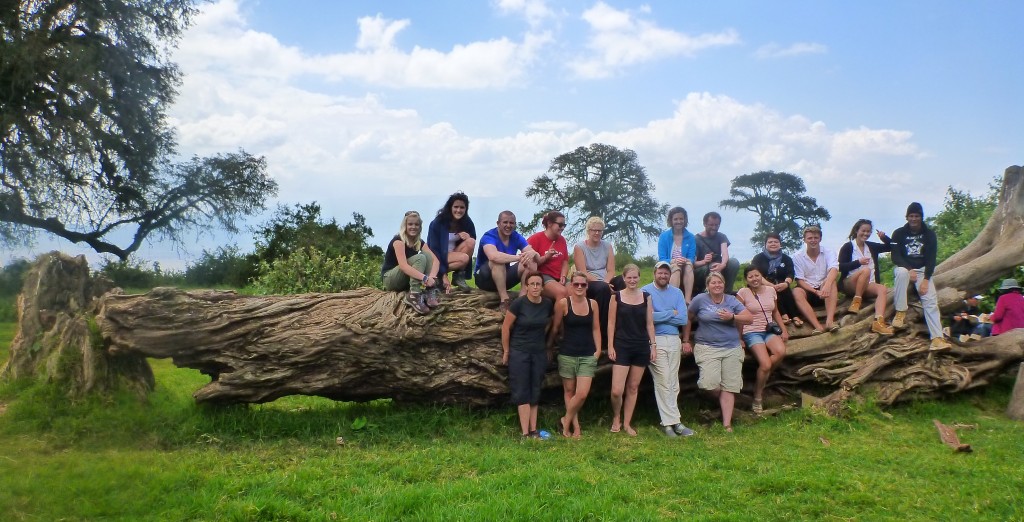 On our way to the Ngorongoro Crater

One of my many/few faults is that I have a short wick, and people get on it very quickly. Amazingly, no one on this trip did. Although, it wasn’t 100% joy. About 12 of the 18-strong tour group had been together for 30 days prior to me joining the trip. They’d toured up from Cape Town and had had a lot of adventures together. And I heard about them all, every one, at least five times. Every night of the trip they liked to reminisce and get nostalgic – I had to ban them from telling me the same story more than three times. By day five it drove me a touch insane and I felt like I’d been on the trip with them from day one.

We ate as a group – the included meals were prepared by our excellent tour leader Ronel – and when a meal wasn’t provided by G Adventures, we’d all go to a restaurant together. Actually, we did on the first night in Nungwi, but it took the poor chef about three hours to make the 18 meals. The one waiter brought them out one at a time so I was pretty much ready to eat my arm by the end. The spicy chicken was worth the wait though.

The next night we split off into smaller groups, but still all went to the same restaurant. I had seafood curry overlooking the beaches of Zanzibar – it was amazing. 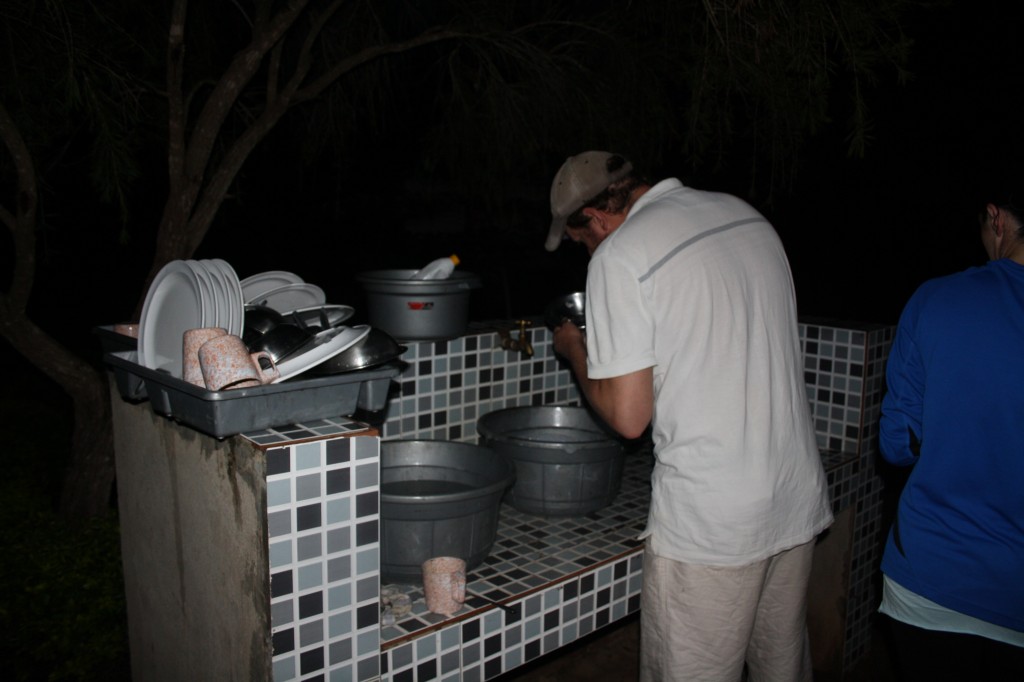 5am kitchen duty is never fun

Personal highlights of Ronel’s cooking included cooked breakfasts at 4am, steak and stuffed butternut squash for 18 cooked on just a few hot coals, and a vat of creamy chicken and sticky rice made on a gas fire.

The peer pressure of travelling in a group meant I drank, a lot. I’ll admit it didn’t take much persuading, but with all the beer, brandy, vodka and Konyagi I was a bit of a state in Nairobi airport when it came to catching my flight home.

The early morning starts generally meant we went to bed around 8/9ish. When I was told that on the first day I pffted (in my head), but on the first night of camping I was the lamest of the lot. Sitting in a truck all day staring out the window is surprisingly hard work.

Being on a budget tour means you have to share rooms, and on the first night I had to share a bed too. Thankfully my bed buddy was excellent and we got on as soon as we met, but it could’ve been a bit awkward. Apparently this doesn’t normally happen.

Anyone who’s travelled the roads of Arusha and the rest of East Africa can give each other that knowing nod of ‘the roads’. There were a few points where I was literally thrown into the air out of my seat they’re that unstable and unpredictable. Anything not tied down in the truck would bounce around or fall down. You could be happily cruising along and then suddenly come to a mound of sandstone in the road causing the driver to brake and you to fly.

Another favourite speed bump was the ‘foursome’ four thin lines of volcanic grit positioned together for drivers to tackle at 5mph. I definitely wouldn’t recommend anyone not used to the roads to go long distances by themselves. It was a bulletproof, reinforced, huge beast of a bus. Apparently the driver’s like to call them’trucks’ to sound tougher. It had 22 seats in twos, with one four around a table. Sitting on the back is a big no no if you value your spinal cord for the reasons above. We had to start a rotation where we progressed two sets of seats up every new day.

Going on a tour means you’ll have a tour leader. I didn’t think much about this before I went – I didn’t think they would really be that much of a part of my experience – but my tour leader Ronel was amazing. She was highly entertaining on the first night in Stone Town, she knew everything about the animals we were seeing in the national parks and she was more patient with us than I could ever imagine being. She didn’t mind when I asked her a million times what time we had to get up, or when we’d be there, or if we could stop for a toilet break.

She was definitely the most fun person on the trip and from the first tequila on day one we were friends. If you want to see East Africa travelling in a tour group is definitely a good option. You’ll be able to see more of the continent in a shorter space of time and your tour leader can assist in your visa crossings and it’s useful to know she’s always there. Travelling in a tour group is also totally stress free. When I was travelling beforehand for a few days by myself I was a bit bewildered and overwhelmed by the totally new experiences and sights around me. Being in a tour group I could quickly adjust and not worry about getting from A to B, or opening times or the best places to eat.

I’d definitely tour with G Adventures again and I don’t think tours are neccessarily just for first-time hesitant travellers I had an incredible experience and saw things I never would if I’d attempted this journey under my own steam.

13 Reasons Why Arty Types Should Go To Porto
← Previous
London Pass Review: Is it Really Worth It?
Next →
Click here to cancel reply.

Hi Vicky, Thank you for sharing my motherland to the whole world and showing the extraordinary experience you had. Many thanks from Tanzania.

Ah no worries. Had a great time in Tanzania, it really sparked my love for travel!

Hey Vickie, Cool post on the group tour Arusha. I have always been a lone traveler, but I can definitely see the benefit for a trip of this nature where you could finish up pushing the envelope a bit too far. Tanzania is the country I am first planning to visit when I have everything organised here in Oz. As I said great post.

I love reading your blog, it makes my itchy feet flare up something terrible.

One question I must ask is, (I gather You travel quite light). How many Kg luggage (generally) do you carry and how much of that is technology? What technology do you carry to be able to do your job. (get a real job!) Me being jealous!! Phones, laptops, audio, cameras, video, chargers, power adapters, boards, etc. the list could go on forever. I think it really must come down at the end of the day to Capability versus Kilograms. There must be an optimum balanced configuration. Maybe this could be the basis for one of your posts.

Great post! I went with absolute Africa and had the time of my life - although we did our own cooking and slept in tents Haha! I think it was a bit cheaper for that though so swings and roundabouts really.

Interesting read....will check out other articles

Nice post, many people wonder about what it's like on a group...overland groups are the most 'intense' form of group travel, with their shared duties and camping. Some people can't handle the bumps and grinds of overlanding...but I think it's worth it!

Yeah some people on the tour couldn't deal with the crazy roads of Arusha. Sitting at the back of the bus is definitely not recommended!