I’ve been to the Emerald Isle a few times now. I’ve tried the Guinness in Dublin (more than once), been to a traditional Irish wedding in Galway and explored the delights of Belfast, but what I’d really like to do, is to go on an Ireland road trip to take in the scenery and get away from the cities. 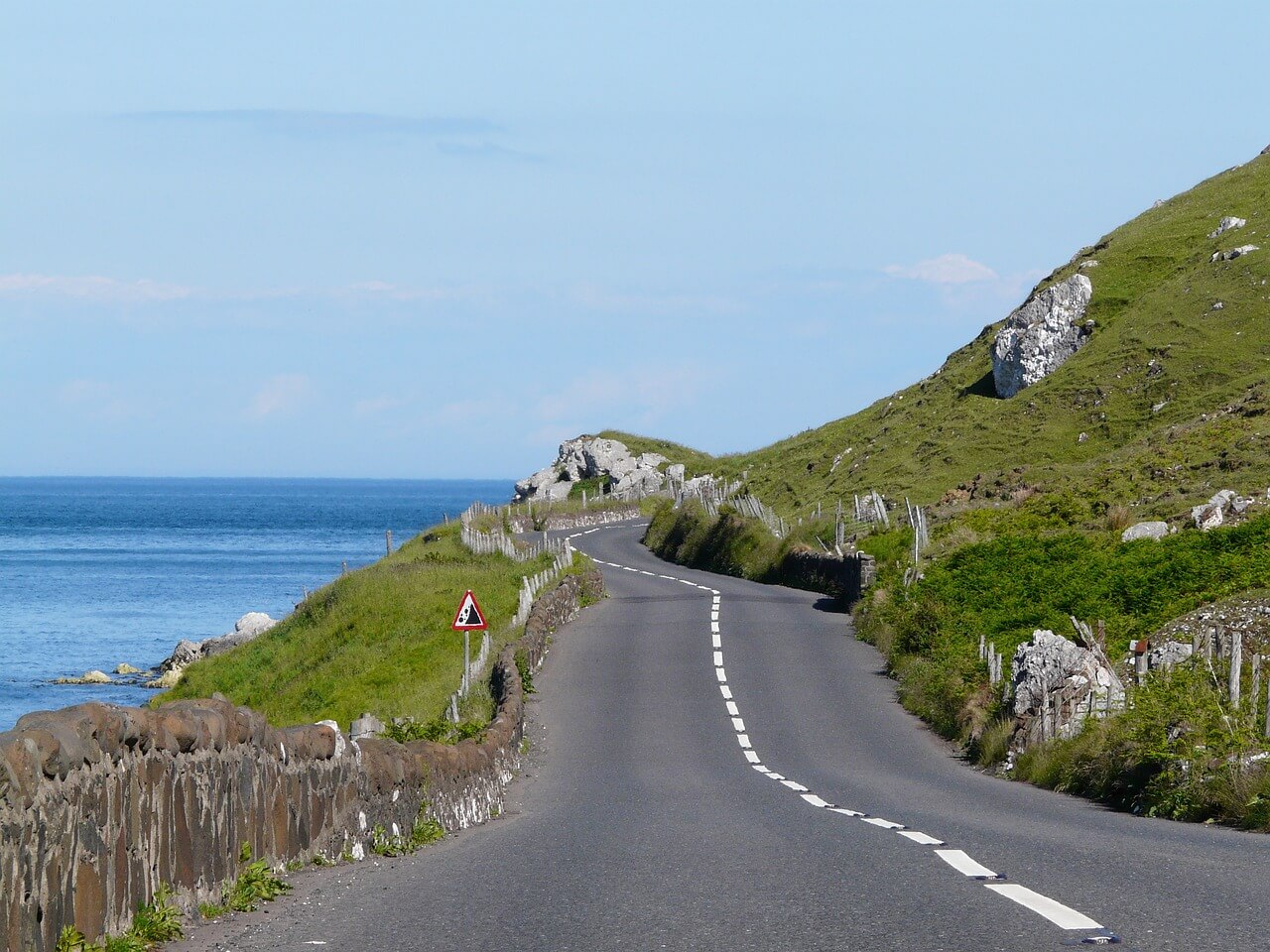 The Wild Atlantic Way has been on my radar for a few years now – thanks to the stunning views – but here are two more Irish cultural drives that look pretty sweet too.

Make sure to check out the latest prices at Discover Cars for your car hire in Ireland when you start planning your trip.
Book in advance to get the best deals, and that links will get you 33% off!

Turns out the west coast’s County Kerry has all the epic waterfalls, magical forests and beautiful beaches you could want. Follow the Ring of Kelly route for your road trip in Ireland and you’ll fit in all the best bits.

Within a weekend, you could see the Torc Waterfall, catch dinosaur footprints on Valentia Island and spot wildlife in Killarney National Park too. 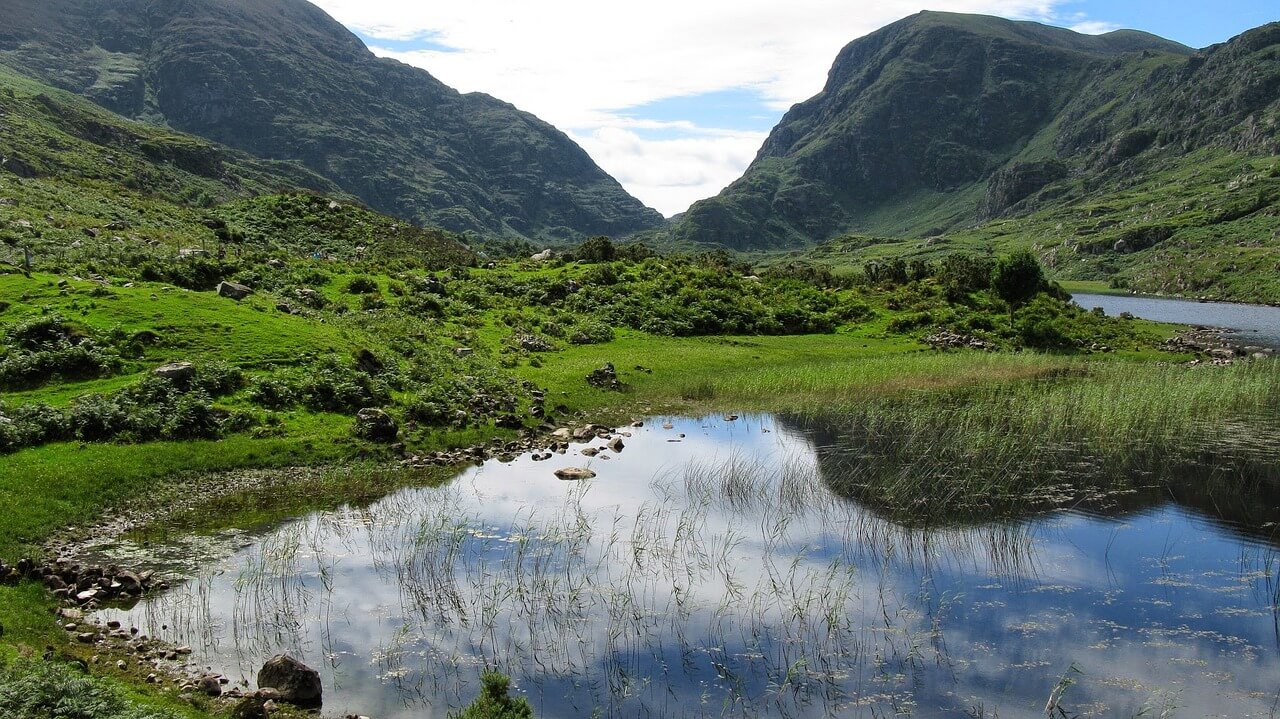 The Staigue Stone and Leacanabuaile Forts are great for history lovers, while the Old Barracks are the stuff of Irish legend. They say that this unique building (below) was supposed to have been built in India but, because of a rather bizarre mix up, (India and Ireland sound pretty similar, right?) it was accidentally built here. 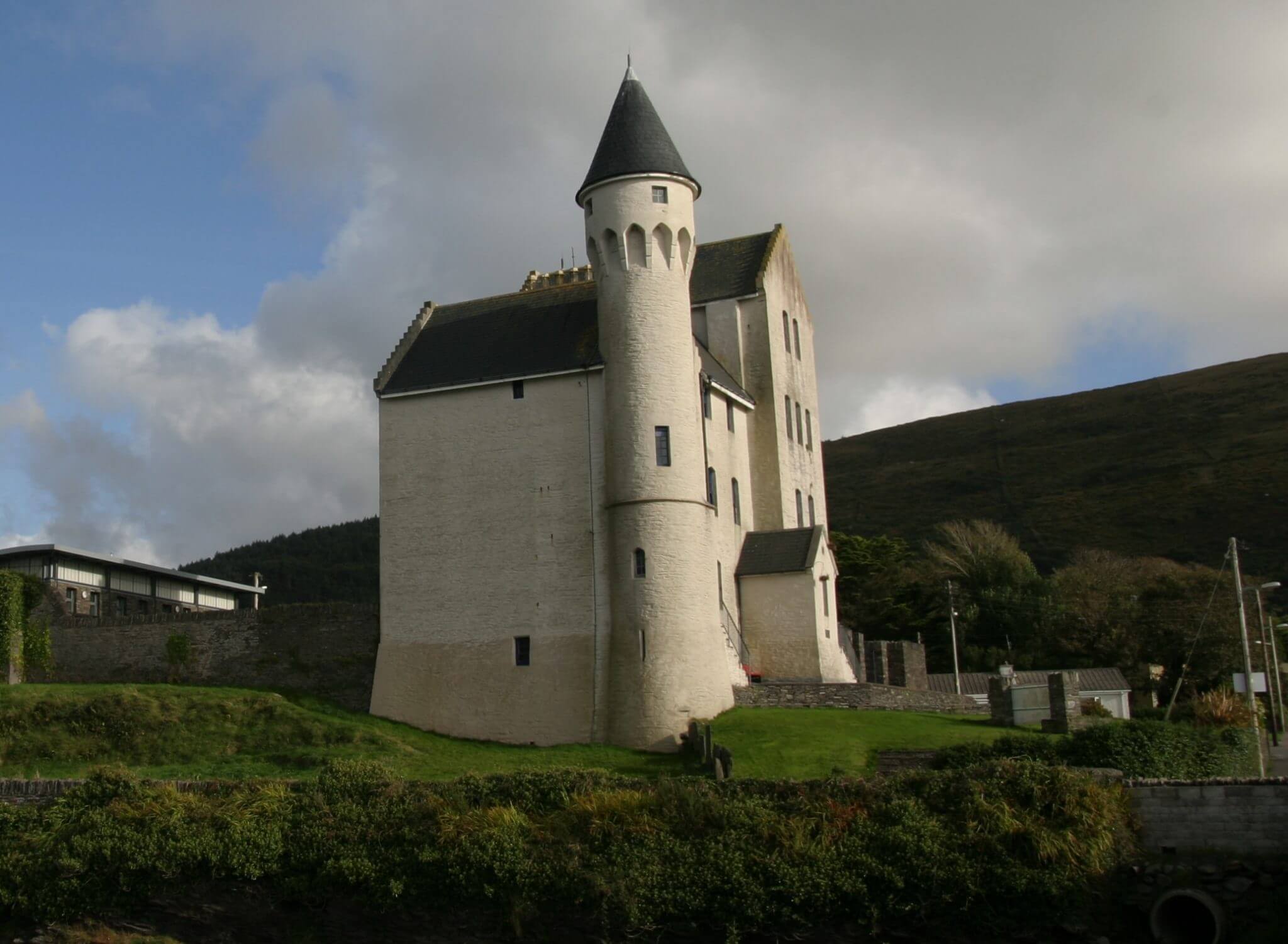 Noteworthy stops for pulling over and getting on the ‘gram along the Ring of Kelly include Ballinskellig’s Ring for a view of the Skellig Islands, Moll’s Gap for a glimpse of the Macgillycuddy’s Reeks mountains and Ladies View for a sunset over the Lakes of Killarney.

Keep yourself refuelled in cosy pubs like O’Neill’s at Renard’s Point, try some great seafood at The Moorings in Portmagee or treat yourself to the sweet stuff in the Chocolate Factory’s cafe by Ard Finnan Bay.

Book your car insurance in advance – check out Chill Insurance for more details and advice.

Fancy hunting down giants, looking for leprechauns and searching out your favourite Game of Thrones characters? Then this route wins – something Lonely Planet totally agrees with, ranking the north coast region number one to visit in 2018. The Causeway Coastal Route is one of the best road trips in Ireland you can do. 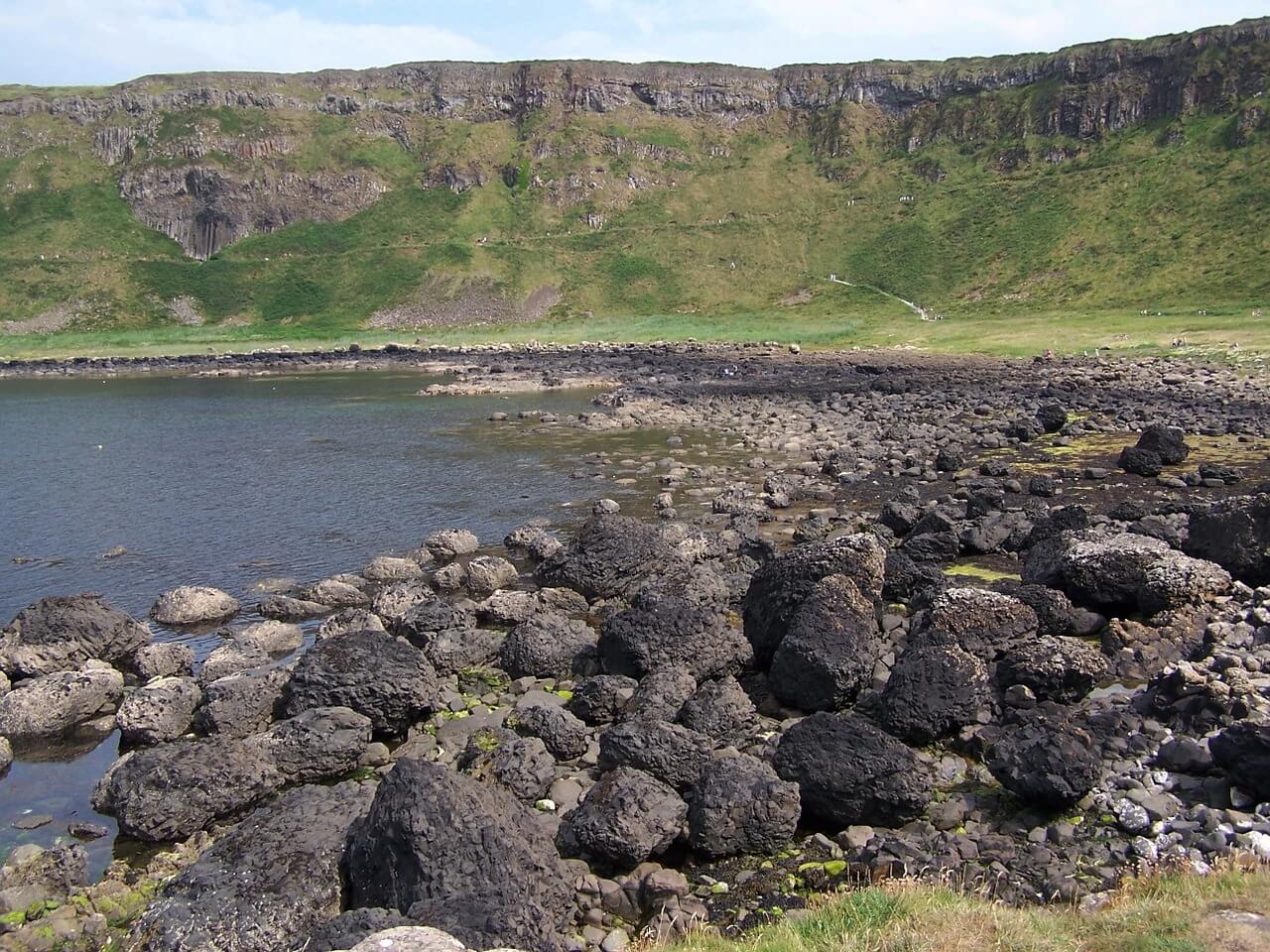 Running from Derry to Belfast at 212km, it can be done in just a few days and is known for, well, its coastal views. But more recently it’s gained popularity for being home to some GoT filming locations so if you’re a fan of the series keep an eye out in the Downpatrick area for the fictional towns of Winterfell, RiverRun and Kings Landing.

I’ve still never actually seen that programme so the references are kind of lost on me, but I’m sure I can still enjoy the scenery. 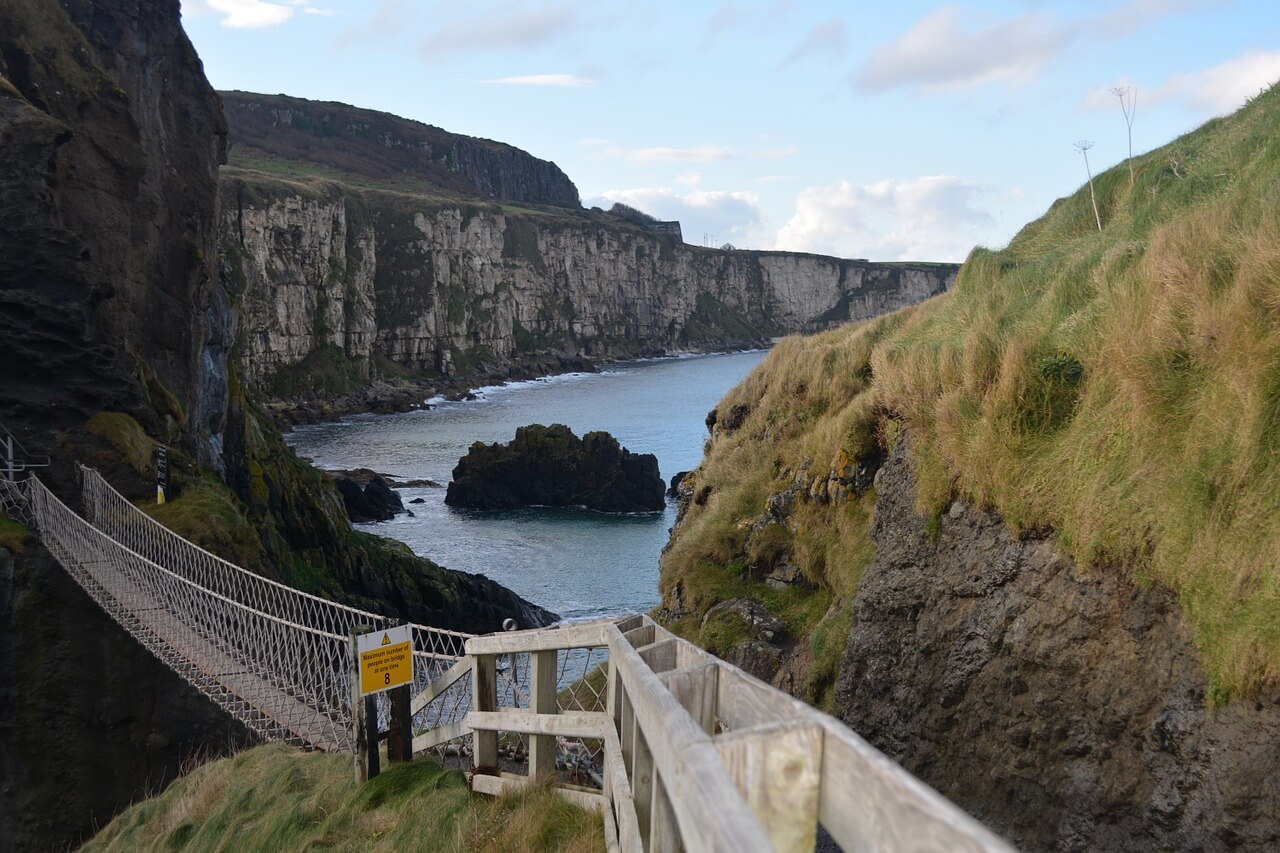 Swapping dragons for giants, the Giant’s Causeway in County Antrim is the most iconic location on this route and nearby you can also test your fears on the Carrick-a-Rede rope bridge. Other shots worth pulling over for include the Glens of Antrim, Rathlin Island, Downhill Demesne and the Mussenden Temple.

Read more: Travel blogger Kasha from linesofescape.com went on a day trip to the Giant’s Causeway.

Over the few days, make sure the belly is full with local grub from the likes of Harry’s Restaurant at Cushendall, 55 Degrees North in Portrush or Billy Andy’s in Glenoe.

There are loads of things to do in Belfast, check out this guide from Live Less Ordinary.

A little longer than the other two routes at 2,500km, ideally you’d put two weeks aside to road trip the Wild Atlantic Way. It takes you along the coastal road from north to south of the west coast of Ireland across six regions, and gets you off to a good start with views of the northern lights and Sliabh Liag cliffs in the Northern Headlands. 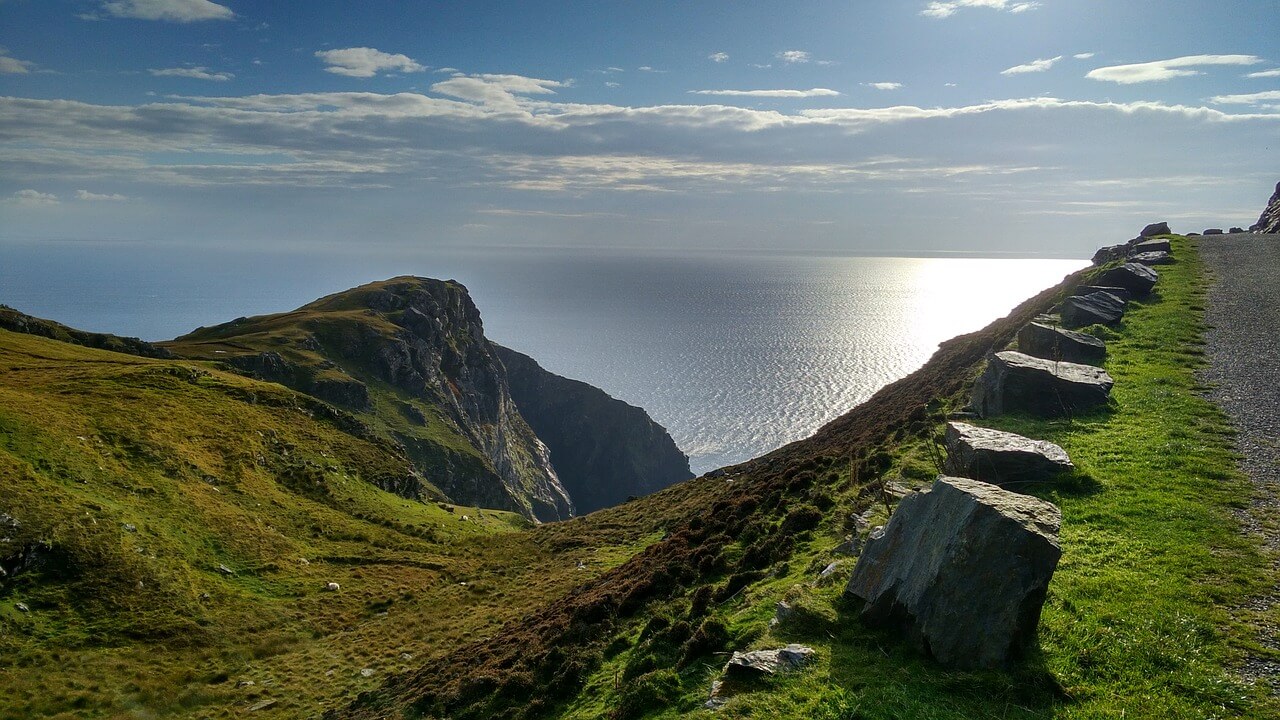 Traditional Irish is the local language and it’s as close to the cliche Irish culture you’re going to get, with lots of traditional pubs like Tig Coili, The Reel Inn and Shoot the Crows, buzzing towns like Donegal, Galway and Sligo and windy beaches on Bay, Surf and Haven Coast.

Read more: Travel bloggers Dave and Deb from theplanetD.com have done it

Making sure you’ve got plenty of places to stretch the legs, there are the mountains of County Clare, Croagh Patrick and the Twelve Bens range. But for those who prefer to amp up the adventure, you can kayak, kiteboard, paraglide, swim, surf or dive along your way south to the Bay Coast. Even further south, watch out for dolphins and whales in the Southern Peninsulas.

Keeping it cultural, the abandoned copper mine also in the Southern Peninsulas, 11 lighthouses and the Lusitania shipwreck at the end of the route on Haven Coast are top storytelling hotspots.

I want to go, I need to go – just need to find the time and money to get out there!

I so want to visit Ireland and do a road trip so these routes look amazing! All those coastal views look stunning!

Ah yeah Ireland is beaut. So much more I'd love to see there too.

Would love to do the Causeway Coastal route some time, looks so beautiful. I've only been to Dublin in Ireland and it seems like such a different experience going on a road trip and getting out to the countryside. Thanks for the tips!

Yeah definitely. Think I'm getting a bit over the cities now – the countryside is where you need to be to really experience a country. Cities kinda start to look very similar. We need to get out there!