The amount of plastic at festivals, that’s just thrown away, is genuinely horrifying. From plastic forks, to polystyrene trays, right up to inflatable mattresses and tents – the average festival makes a whole load of landfill, and much of it could be reduced, if not eliminated. I’ve been working with Friends of the Earth to create a guide on how to reduce the waste of plastic at festivals.

“Friends of the Earth stands with anyone who cares about the world we live in, whether you’re a first time supporter or a seasoned campaigner.

The first images of Earth from space inspired a movement of people who wanted to protect the only planet we have to call home. It looked beautiful yet vulnerable.”

They’ve published the guide on their blog, but I thought I’d introduce you to some of the highlights, to help you to try and reduce the amount of plastic at festivals you use. Let’s work together on this.

1. Take your own coffee cup

Instead of getting your morning brew in the standard coffee cup (which can’t be recycled and goes straight to landfill) take a reusable cup along to the coffee stand. They should be more than happy to brew up in that, and if not, go somewhere else.

Now picture that, times 5 for the amount of days.

2. And your own refillable bottle

Worldwide, 1 million plastic bottles are bought every minute. Buying bottles of water is one of the most expensive and pointless ways to spend your money. Most festivals now will provide a tap with drinking water – so take your own refillable bottle and take advantage.

You need to drink a lot of water when you’re in the sun, and dancing, and walking, so save on money and the planet by refilling whenever you have the opportunity.

Check out the prices of refillable water bottles on Amazon.

Say no to straws.

Most festivals are following Bestival’s lead by banning plastic straws. Excellent news for marine life, and the festival’s clean-up operation. You do not need a straw, but, if you do like a straw with your cocktail, take an aluminium one with you so you can still reduce the plastic at festivals, but enjoy your drinks how you like to. Also, sometimes they offer paper ones – they’re fine.

4. Take your own cutlery

Ever heard of a spork? They’re brilliant. A fork and a spoon in one instrument, carrying one of these around with you for the three meals a day you’ll enjoy at the festival will reduce the plastic cutlery count by at least 10 per person, imagine that times 20,000 (the capacity of Neverworld) and the numbers are getting serious.

Simply FORK out a few quid for one, and you can use it for the rest of your life.

Or, just take a fork from your cutlery drawer. Done.

Check out the eco-friendly sporks on Amazon.

5. Use a flannel instead of wet wipes

Ok, this is one I’m trialling for the festival I’m going to this weekend – using a flannel instead of wet wipes. Wipes are always listed in any festival essentials article you ever read but they are SO bad for the environment. The wet wipe pollution in England is so bad The Guardian reports they’re changing the shape of our riverbeds.

All those people, using all those wet wipes, at all those festivals.

You could get the same effect with a flannel or two. Just fill up your reusable water bottle, soak your flannel, add a bit of eco-friendly soap, et voila, you have a reusable wet wipe. Costs less for you (99p each on Amazon), and the planet.

Thousands of tents are being left all over festivals in the UK. Perfectly good tents, but seeing as they were so cheap, it seems like less hassle to just leave the tent than to take it down, put it away and carry it.

Don’t do this. Not only does it contribute to landfill, but it also means someone else has to take it down, pack it away and carry it.

I remember going to Bestival in 2014. The refugee crisis was being reported all over the news, the desperation, and yet, despite the fact the festival had an area where you could donate your camping stuff for better use, which we did, many of the tents we walked past were empty and open, and just left.

Cheap single use products are damaging the environment, and in the long term cost you more too. Invest in a decent tent for a better time at the festival, and to use again.

Check out the prices of tents on Amazon.

When I first heard about people slating glitter use at festivals, I was like FFS is NOTHING SACRED? Apparently wildlife was dying of glitter consumption. I remember telling my mum that if I could die of anything, it’d be glitter consumption. But then I realised it wasn’t actually funny, it was / is a serious problem. The glitter is getting into the water streams, animals are eating the beads, and then dying.

All of a sudden those glitter partings, boobs and beards don’t seem so fun.

Glitter and festivals go hand in hand. It’s one of my favourite parts of the fest, the glitter application. So we need to buy biodegradable glitter is made from plant cellulose and the teeniest amount of aluminium. No difference to you, all the difference to the environment.

And for the festival organisers… 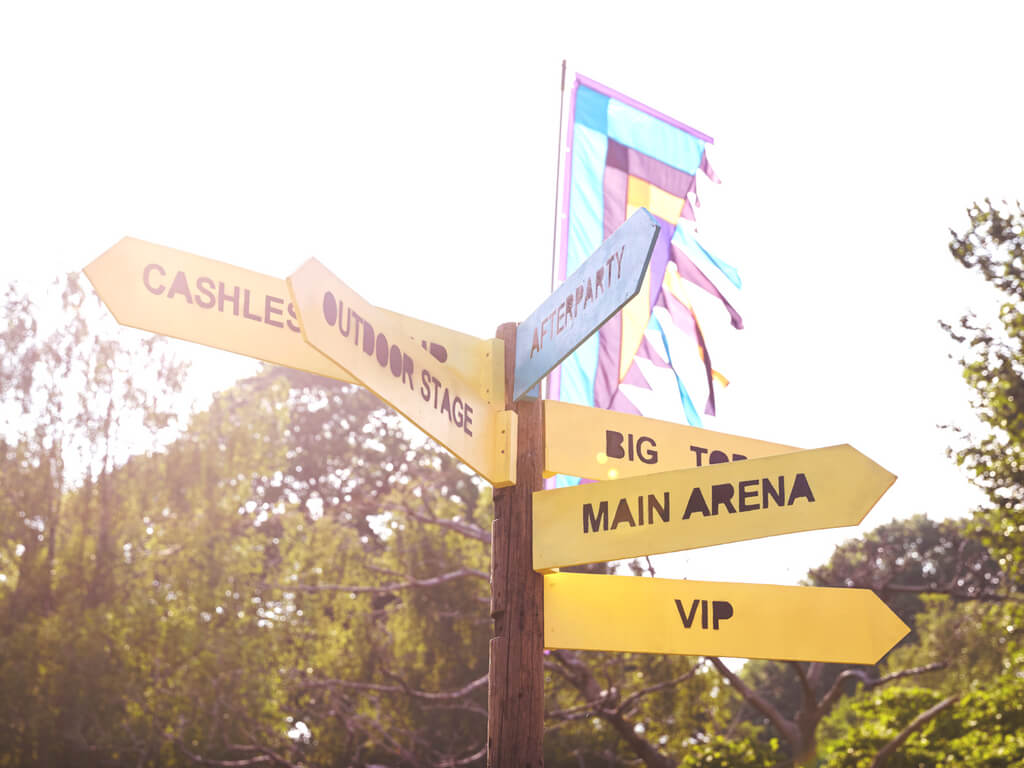 If we work together we can severely reduce the amount of plastic used at festivals, but it’s also down to the festival organisers.

“More than 60 independent British festivals – including Boardmasters and Bestival – have pledged to rid their sites of single-use plastic by 2021.” – BBC News

– They need to ban their vendors using polystyrene and plastic cutlery. Easy to do – there are plenty of eco-friendly alternatives out there.

– Ban plastic bottles. Only serve drinks in cans at the food and drink stalls.

– Stop using plastic based wristbands. It’s easy to use fabric ones, and better for the environment too.

Thinking about your plastic use at festivals doesn’t have to ruin or even tarnish your festival experience. It’s not ‘being boring’, or ‘hippy dippy’ or ‘one of them’. It’s taking responsibility for the fact that our plastic use is genuinely killing off wildlife right now, and damaging our oceans and coastlines for the future.

I’ll leave you with one of the best and most emotive quotes for me on the war on plastic: