Neverworld Festival is such a small one. I hadn’t quite realised that this was a festival for just 5,000 – making it one of the smallest festivals I’ve ever been to.

Of course, that meant BENEFITS. – Easy to get to the front of the stage

– Didn’t take long to get a drink

– Or get in the toilet

– The queue to get in was about five minutes long

– And the ideal one-minute walk distance from the toilets, the shower, the food, the cash point AND the water tap.

For someone who’s used to walking at least five minutes to each amenity at Glastonbury, this was a delight. I went to Neverworld Festival for the weekend, with Ben, and the awesome Paul and Karen from Global Help Swap. Ben and I rented a car and traversed the traffic tailbacks of the M25 to reach leafy, beautiful Kent for the weekend. The roads leading to Neverworld were so quiet, with absolutely no signage, I worried we’d got the postcode wrong, but one last turn, and there we were. With so few people, and probably at least 500 of them children, the vibe at Neverworld was super chilled. Well when I say chilled, that particular weekend was actually boiling. We had to seek solace in among the trees, but ended up with an awesome view of the main stage while staying in that sweet shade. There were just three areas to Neverworld – the Neverwoods with The Fortress main stage, Skull Ridge for the dance lovers and then Mermaid’s Lagoon, for more dance by night, but yoga and beach parties by day. The fancy dress this year was ‘pirates, mermaids and lost boys’. We actually invested in full on pirate outfits, but they didn’t make it out the packet after the 30C heat hit – just couldn’t face it. Instead, it was shorts and tshirt, and when the sun went down – my striped trousers and a pirate hat. Over the weekend we saw Clean Bandit, Tom Grennan, a bonkers Elvis fronted Nirvana band, Bastille, We Are Scientists and Lucy Spraggan. And, had a go in the bumper cars… until Karen smashed her face into the dashboard, that was sad.

Between the four of us I think we managed to eat everywhere at Neverworld. The sourdough pizza was a particular highlight, especially as just as I walked up they just announced a new collaboration with the chicken stand next door and we ended up with a BBQ chicken, mozzarella and pepperoni pizza. Yum. Also, tried the churros (choc sauce wasn’t good enough for me), I had a sausage and egg muffin every day from the breakfast van, and then a slice of the other pizza stand, and then chips with steak bits and cheese on top. Healthy right?

Oh actually, I need to change my favourite food. My actual absolute favourite was the pork bun from the BBQ meats stand. So much meat. So delicious.

There were a lot of options for food, for the three days.

On the Saturday night I was kinda overwhelmed as I looked round and realised that all the signs for food – sourdough pizza, halloumi fries, falafel wraps, pulled pork, churros – were all for foods I hadn’t even heard of before the last ten years. The food options suited the clientele – this was a hipster, middle class, feast of a festival.

Food started at around £7 a meal. There were three bars at Neverworld, one in each area. They served a range of ciders, beers, spirits and wine. We were buying wine at £20 a bottle – which seemed the easiest and most cost effective thing to do – and then we kinda went for it on the elderflower ciders too.

The bar staff were really friendly, and even gave us cups of ice when we asked. At most festivals that would be a definite no.

Camping at Neverworld was an absolute breeze. As I said, small festival benefits. Walked in and within about three minutes we’d decided where to put the tent, and had it out ready to put up. It was the first time we’d used the Coleman Spruce Falls vis a vis Tent so took a while to get to grips with. But Ben was great at it – while I sat and had a cider.

C’mon, I had driven for four hours…

We were about a minute walk from the toilets – perfect distance to avoid the ‘fragrance’ – and the same again from the food trucks, and the gate to get in.

Camping was easy, quiet, and I think thanks to the blackout USP of the tent, and the peacefulness at the campsite, we went to sleep quickly and stayed asleep too. Honestly, best sleep I’ve ever had at a festival.

With the festival being so small too, the walk back to the car after a weekend of fun was amazingly easy too. I’ll remember that fondly next year when I have to walk the miles back at Glasto. 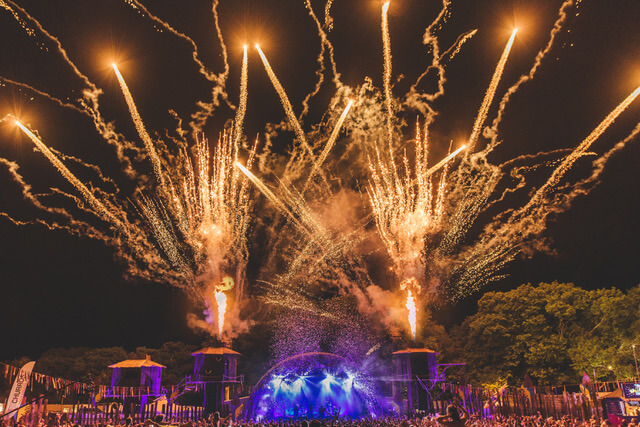 Toilets at Neverworld were great – they were those outdoors compost ones, which after 15 years of going to festivals I’ve decided are the best. So that was a tick.

A massive cross though was the fact they were still using plastic cups, especially after publishing this post on how to reduce plastic at festivals that very morning. I feel like it’s been a while since I saw plastic cup use like this at a festival. Need to sort that out for next year Neverworld!

Who is Neverworld for? I’d recommend Neverworld for families with young children who want an easy festival experience on a small site. We were camped near a few families who’d set up a camp together – there were about 20 of them with loads of kids. It’s also great as a first festival for teenagers – I saw quite a few groups of glittered up girls.

And, for anyone who wants a lovely, small, festival experience without the fear of too many people, overused toilets, queues and long distances. *I was invited to Neverworld Festival in 2018 in return for an honest review on my blog ^.

Tickets for next year’s Neverworld Festival are on sale now.
Get them quick as the price goes up the closer we get!

Such a great detail. This festival looks amazing and you captured really incredible pictures. Thank you so much for sharing this post and experiences.

Thanks, glad you enjoyed it :)

Looks like you had a great time! Thank you for sharing! Love the photos!

Yeah it was a really fun weekend. My overriding memory is definitely of the heat, but who knows what it'll be like next year!