Last weekend was Dour Festival in Dour, Belgium. I went over to see what this little festival of alternative music and love had to offer little old me.

Within about two hours of arriving me and my friend Mel were absolutely filthy. From our faces to our feet we couldn’t keep up with any sort of cleanliness. Dour had kindly given me 2 VIP tickets to review and even with the showers of the ‘very important people’ we were struggling. I’ll admit, the VIP tickets were amazing. We had showers, toilets and water within a two-minute walk from our tent, and our little campsite was just by the main stage through the VIP beer tent. Apart from that little luxury though we were right in amongst it with the real people.

Everyone was so friendly at Dour. They loved that we were from England and there were quite a few times where randoms would just strike up a conversation sat on the grass or chilling on the picnic benches. I loved it.

“Where are you from?”

The bar staff were nice, the security was cool, and my fellow festivalgoers were excellent – totally different to some festivals I’ve been to. Dour festival is really popular in Belgium – they have over 100k fans on Facebook – but it seems no one has really heard of it in the UK with only 5% of the audience from over here. More than 150,000 people went last year, which actually really surprises me, it definitely felt smaller than that with plenty of space, service and toilets for everyone, compared to some other festivals I’ve been to.

I loved the atmosphere at Dour. It’s marketed as 5 days of alternative love and music and I think with the acts chosen to headline it naturally attracted great people who were just out for a good time. Highlights of the Dour 2013 line up for me included Jurassic 5, the Vaccines and Devendra Banhart.

I was also introduced to some wicked new music, which only happened because I wasn’t very familiar with all the line up. This was actually a pretty cool way to explore a festival as usually I’m going from act to act, so I’m happy about that. It was a brilliant festival for people watching – something I like to do a lot of. 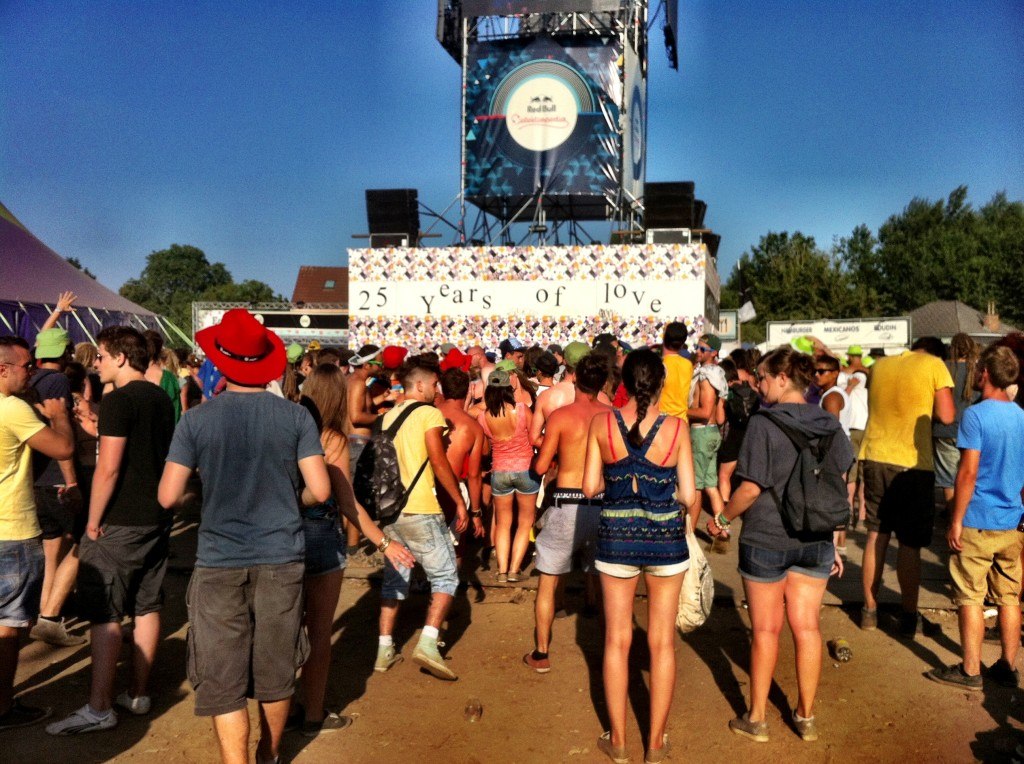 Pretty easy to get to too…

Dour was super easy to get to. I got the Eurostar for £69 return which could go straight to the Saint-Ghislain Station, although I stopped over in Bruges. At Saint-Ghislain there was a free bus to the festival entrance, and that was that. From London to Dour could take just 4 hours if you time it right.

Drinks and food at Dour

Like EXIT festival they did the old token scheme. You had to pay €10 for 8 food tokens and €10 for 4 drinks tokens. Soft drinks and 1/2 pint of the local Juliper beer were 1 token so €2.50. A pint was 2 tokens as were the wine and spirits, so €5. They were totally fine about taking your own alcohol in though so we made it through with a litre of gin and a few beers and Fantas from the bar.

I had some frites for 3 tokens so €3.50ish and a dissapointing falafel wrap for 6 so £7ish. The rest of the time we went to the nearby Carrefour supermarket and ate cheaply enough. The VIP toilets were my urination station of choice, but I did try the commoner’s porter loos a few times to see how they fared, as you know I have issues with festival toilets. I’m pleased to say they were as clean and fresh as a porterloo will ever be. There were loads of them and I didn’t have to queue for a second. Very impressed. Not like at Field Day in London where I’d pretty much wet myself before I got to the front of the queue.

My advice would be to stay out as late as possible, because oh my days it was cold at night. The first night I fell into a gin-induced coma, thankfully. But the second night I only slept for about 2 hours. Silly us just took sheets to sleep in thinking it would be less to carry and I didn’t even think to put a hoody in. Never been so cold. By 7am I’d never been so hot as the sun nuked its rays through the canvas tent.

One thing’s for sure, there’s no chance of any sleep at Dour Festival, but sleeping’s cheating anyway when it comes to festivals.

How to Save Money at Festivals
← Previous
The Best Things to Do in Vietnam According to Travel Bloggers
Next →
Click here to cancel reply.

I went to Dour 7 or 8 years ago and I loved it. I don't know if it's still the same, but I loved that it was so underdeveloped. When I was there, no one really showered. Everyone just sort of washed themselves in the morning at the drinking water station. Also the frites were all I ate when I was there. Lots of happy memories.

Since you're a festival lover, have you ever been to Bonnaroo? It's in my hometown, and you must let me know if you ever make it here!

I would love to go there! Really want to check out an American festival – I'm over there around Coachella time next year so hoping to get tickets for that one.

Hey Vickie, Great post, Dour Festival atmosphere sounds really cool. I had a delightful young lady guest from Belgium recently, so if she was representative of your hosts, it would have been a posative experience. Might have to add that one to the list. Speaking of lists, London is on my bucket list (birthplace). I live in Australia. There really is no substitute for LIVE music.

Hey Bob, glad to hear you've had a great experience with Belgians too. They were very friendly and I definitely want to go back one day. It's so easy if you come to London – just a hop, skip and a jump on the Eurostar!