Bestival was a bit of a last minute plan for me, but definitely a good one. As soon as I realised it was a weekend later than the usual first one of September I wanted in.

And so, I flew in from Havana at 9am and was at Bestival on the G+Ts for 1pm… via a quick shower at my friends house in Emsworth near where we needed to get the ferry from. I was pretty gutted to miss the Thursday at Bestival, but seeing as I was sunning myself on a Caribbean Beach I could let it go. It just meant we’d have to really go for it to make the most of the days we had…

We’d been shopping over Bank Holiday Weekend for our outfits and I already knew what to pack for Bestival so that didn’t take long. With just one backpack each we went from Porstmouth Harbour – only 20 minutes away by taxi from my friend’s house – to Ryde in the Isle of Wight. It took a taxi, a boat, a bus and a ten-minute walk and we were at the Halfords stand where we were due to pick up the two £12 tents we’d preordered to be delivered straight to the festival. One for sleeps and one for a wardrobe. It was so good not to have to carry a tent as well as our sleeping bags and tonic supply. And the tents would’ve been great, if it hadn’t rained.

Top tip for me for next time: invest a little more in a better quality tent.

For some reason it felt like we didn’t see much at Bestival this year. Actually, to be honest, it was blatantly because we talked the whole way through all the sets – when I’m with Chloe I can’t stop. We’d be all excited to get in position for who we wanted to see and then get chatting while we waited and then all of a sudden it was all over. I could barely speak by the end of the weekend, I’d been talking so much. We did manage to see…

The highlight was definitely Ella Eyre – I’m loving her music and attitude right now. We were pretty gutted to have missed Craig David, must read the line up better next year! 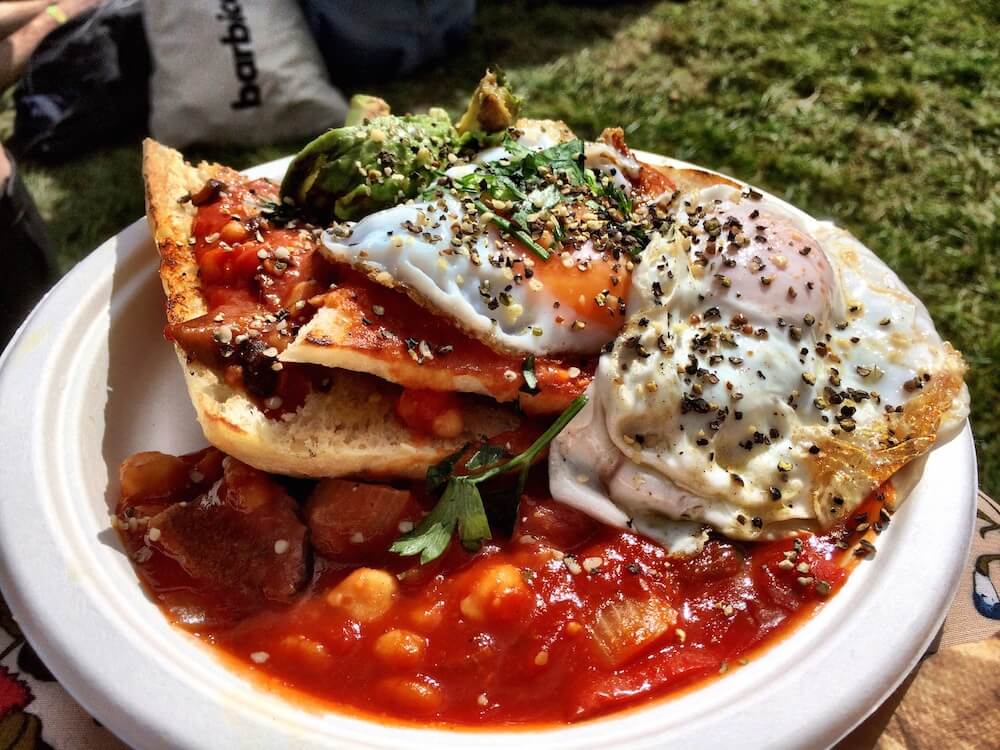 I was well impressed with the food at Bestival this year. Check out this avocado, egg, ciabatta and beans mix from the Kaleidoscope Stage. Now’s probably the time to admit that my friend and I did share a nachos every single day, but it had vegetarian beans on and jalapeños so surely counts as one of our five a day?

We were pretty disappointed with the flatbread offering we had from the flatbread stand at the entrance but the falafel from the Vegan and Vegetarian stall was absolutely delicious. We took gin, rum, ginger beer and tonic and supplemented our supplies with red wine and Bloody Marys from the Observatory Cocktail Bar. There was no need to worry about sneaking alcohol in as they didn’t even check on the gate, as long as you didn’t have cans. Next year we’ll take the bags of wine I’m always recommending too – a large part of our budget went on the £22 bottles. 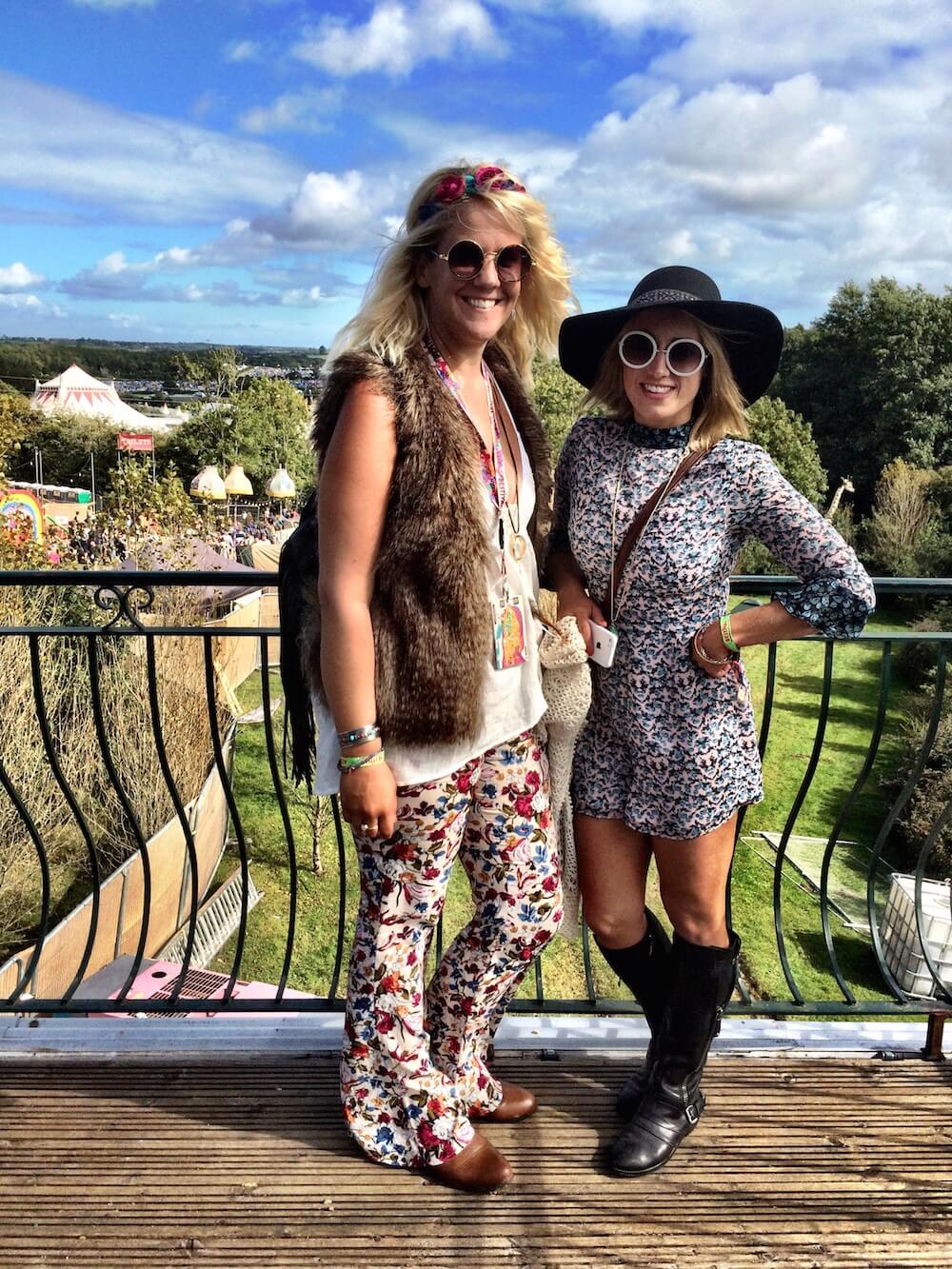 Bestival is well known as being the festival for dressing up – this year’s theme was ‘Summer of Love’. We went for it. It was so cool looking out to the crowds and seeing everyone dressed up either in sparkles or hippies. Can’t wait to see what the theme is next year. We watched the fancy dress show on stage with Gemma Cairney from the tellybox. The winners were these guys in Love Hearts costumes, who all got tickets to next year’s festival. How cool is that? We’re going for it next year. Two of my favourites were the guys who dressed as Micheal Jackson, complete with the cardboard face mask and then pushed through the crowd at The Jacksons shouting that they were late. Funny. Bestival is a whole experience rather than just being ‘for the music’. On the Saturday morning we joined in with a techno stretch, until bending over made our heads spin too much.

The commune up on the hill offered all kinds of activities from singing to acro yoga to speed dating and there was a creative tent with flower headband making classes and homemade face packs too. I didn’t really fancy putting avocado and banana on my face when I didn’t have the proper tools to get it off so didn’t bother with that one, but each to their own. There was a WI tent, games, an outward bound adventure tent and the Bestiversity too, which offered TedEx like talks in comfy seats on all sorts of things from biodiversity to Corbyn to eating bugs. I’d definitely go back to Bestival next year, although I’d like to go in a bigger group. It’s so much more fun when there’s a few of you back at camp and to have a few drinks with. We talked, we chilled, and we definitely partied once or twice. Bed time was about 3am as this year the music shut down at 4am – I’m sure it went all night last time I went to Bestival?

Next year I’m planning on swimming to Bestival but I’ll let you know if I follow it through!

Did you go to Bestival? Any highlights?

Hopefully I'll be there too! Love all the fancy dress :)

The bestival is definitely on our bucket list ! We hoe to be able to go there in 2017 ;)

Bestival is one of my "To Do" festivals. I have been away from the UK for 3 years now but I am coming back and I look forward to doing it this year if I can but definitely next year.

Thank you for your write up, it is really cool. I look forward to other things to do in the Uk from your blog.

Ah yes, Bestival is awesome! Not going to make it this year unfortunately as I'll be in Europe somewhere. I hope you have a good time if you make it there though – sure you will!

[…] Getting with the Summer of Love theme at Bestival with […]